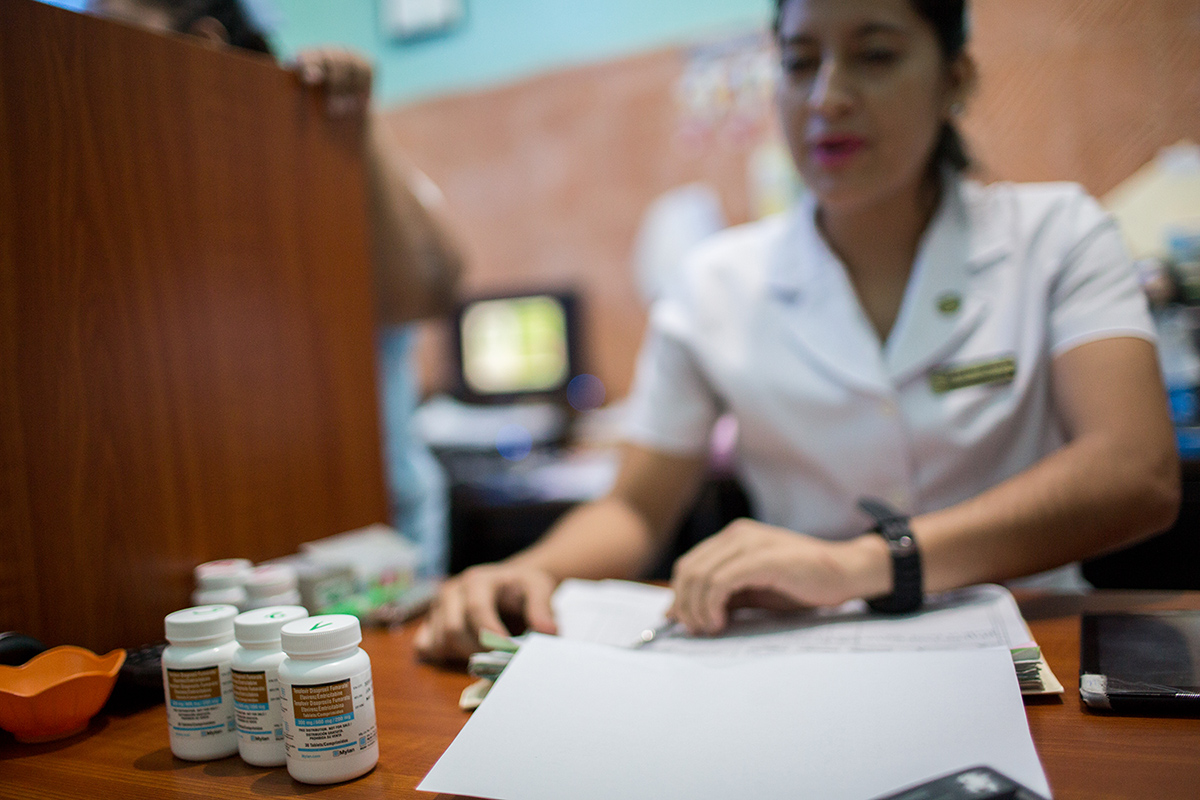 A nurse provides antiretroviral medicines to an HIV-positive client in Guatemala. Photo by Anna Watts for IntraHealth International. (Banner: Felicia, a 29 year old Liberian nurse, prepares to go inside an Ebola patient ward to draw blood. Photo by Morgana Wingard for USAID, used under CC BY-NC 2.0.)

It was a decade marked by Ebola outbreaks, HIV discoveries, and opioid crises worldwide.

As the 2010s come to a close, we’re looking back on the past decade in global health.

Here are ten big moments that will stick with us—and could continue to shape the future of health for us all.

2010: We worried about a global explosion of malaria

During 2010, we saw headline after headline about climate change. Many of them focused on a big question around global health: Would rising temperatures and flooding bring new onslaughts of malaria-carrying mosquitos?

In fact, global malaria rates have generally gone down over the course of the decade, though progress has been slow. And our changing climate has since brought new health challenges to light, including around food production, water safety, air quality, and meeting the health care needs of displaced people. 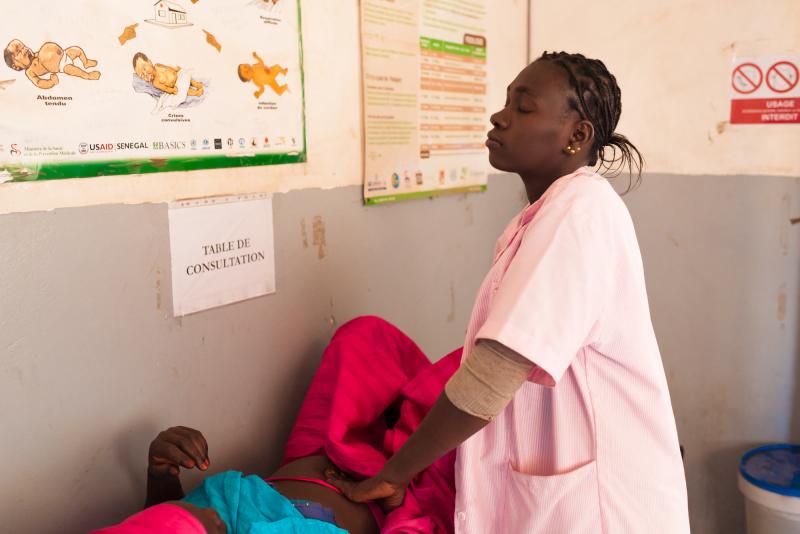 Midwife Fatou Mbaye makes sure her pregnant clients get their antimalarial meds during visits to her health post. Malaria rates have been dropping in Senegal, though it remains endemic in the country. Photo by Clément Tardif for IntraHealth International.

Also read: From Malaria Prevention to Postpartum Family Planning, Midwives Are Changing the Story for Women in Rural Senegal

2011: We discovered the true power of ARTs

This year marked a major turning point in the HIV epidemic. In 2011, researchers found that treating HIV early with antiretroviral medications decreases a person’s risk of transmitting the virus to others.

This discovery changed HIV care around the world. Health workers everywhere now help clients get started on ARTs as soon as possible, learn to stick to strictly scheduled drug regimens (still a challenge), and get access to PrEP (or pre-exposure prophylaxis, which hit the market in 2012) when they need it.

An AIDS-free generation is now in sight, thanks in part to these advances. 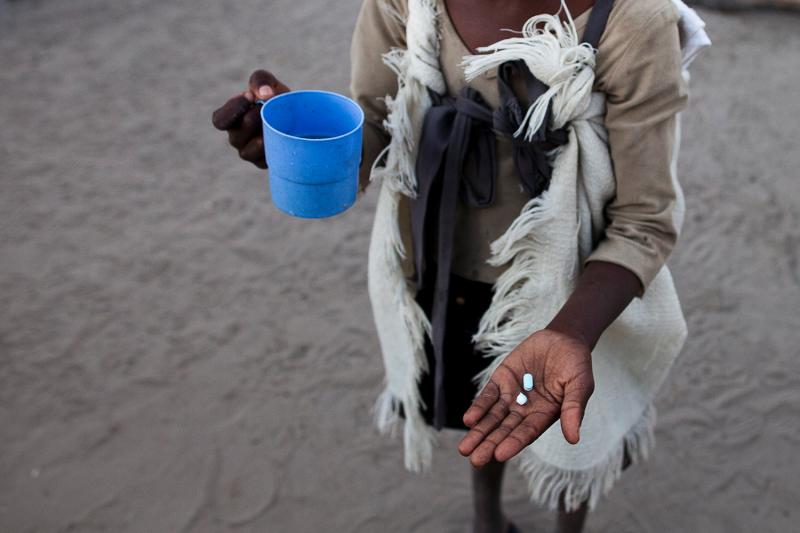 In this child's village in Namibia, there used to be a funeral every day during the height of the AIDS epidemic. ARTs are now keeping thousands of children alive. Photo by Trevor Snapp for IntraHealth International.

When the UK Government, the Bill & Melinda Gates Foundation, UNFPA, and other family planning powerhouses gathered in London in 2012, they were proposing something unprecedented: they wanted to give 120 million more women and girls access to modern contraceptives—ensuring they had the right to decide, freely and for themselves, whether, when, and how many children they have.

Since 2012, the resulting Family Planning 2020 initiative has reached over 53 million additional women and girls with contraceptives—not 120 million, but still an amazing global accomplishment, and one that would not have happened without the burst of commitments at the summit in 2012.

Now, as 2020 approaches, the partnership is working on a shared vision for 2030 that will build on its progress in the coming decade. 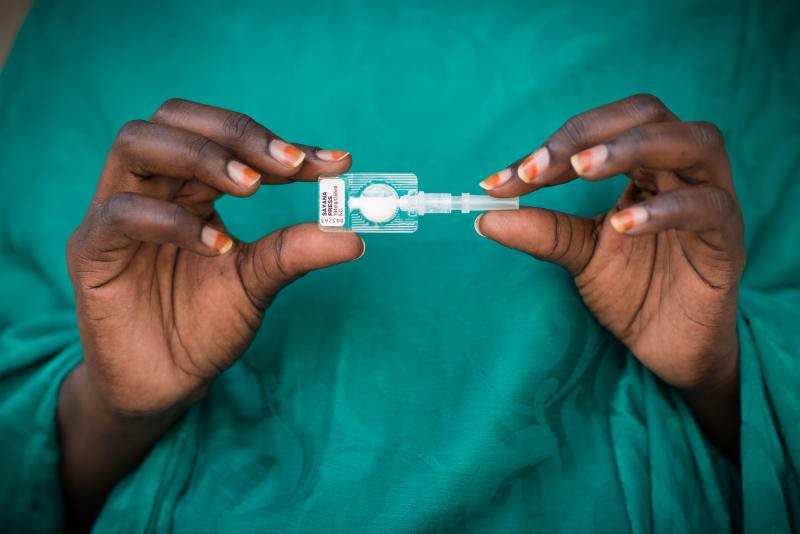 Senegal and other countries have begun introducing Sayana Press—an easy-to-use and subcutaneously injected contraceptive—as an option for women and girls. Photo by Clément Tardif for IntraHealth International.

A 2013 report by the International Agency for Research on Cancer revealed that over half of all new cancer cases and almost two-thirds of cancer deaths in the previous year had occurred in less-developed regions of the world.

The report also predicted that those proportions would increase by 2025, meaning that cancer would continue to hit poorer countries harder than ever. 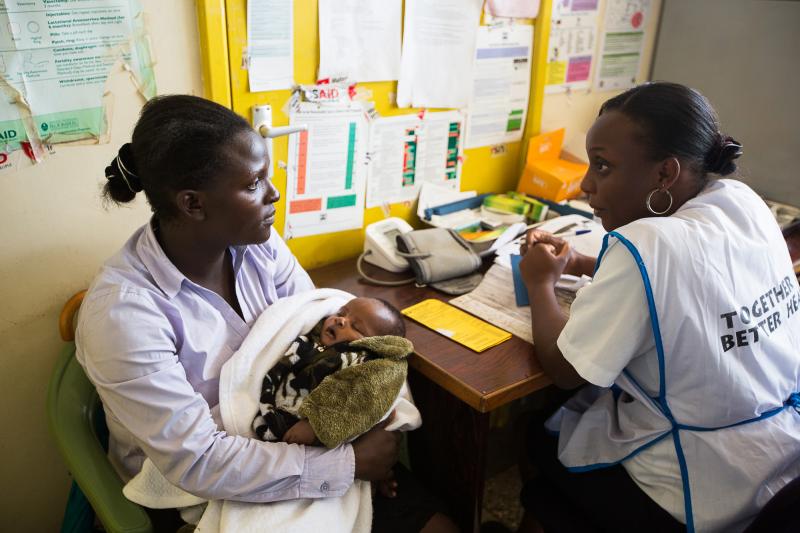 A client in Kenya undergoes cervical cancer screening for the first time. Photo by Trevor Snapp for IntraHealth International.

In 2014, Ebola began to spread in West Africa, a region that had never experienced the disease and was completely unfamiliar with it. It was the largest outbreak in history.

Between March 2014 and January 2016, the virus killed more than 11,300 people in West Africa, including over 500 health workers. Guinea, Liberia, and Sierra Leone’s health systems were already stretched thin when Ebola hit—some had only a handful of doctors and precious few nurses to begin with. Losing so many health workers was a major blow.

As Liberia, Guinea, and Sierra Leone rebuild their health systems, they’re dealing with some entirely new health challenges. One of those challenges is Ebola survivors—the outbreak left more than ever before in history.

The lasting effects of the disease—including long-term eye problems and the virus’s ability to persist in breast milk and bodily fluids—have created challenges no health workers have encountered before. 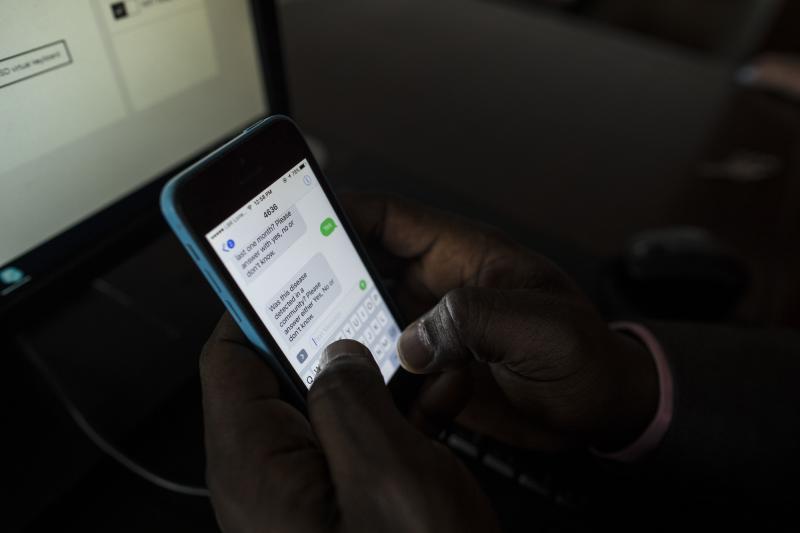 During the Ebola outbreak in West Africa, UNICEF and IntraHealth teamed up to create mHero, a two-way, mobile phone-based communication system that connects ministries of health and frontline health workers. Photo by Sarah Grile for USAID.

The MDGs helped us reach major development milestones this decade. Child deaths fell by more than half to 5.4 million—in 1990, it was 12.6 million. We also saw drastic reductions in maternal mortality, extreme poverty, and access to safe water.

In 2015, the UN also reported that worldwide displacement had hit an all-time high. Holistic development goals like the SDGs are more important than ever, if we’re to meet the diverse needs of the 70.8 million people on the move today.

Also read: What Works and What's Missing in the New Global Goals

In 2016—two years after it released its landmark Workforce 2030 strategy for the global health workforce—the World Health Organization began working on what would become the first-ever guidelines to help national governments improve their programs around community health workers.

Historically, the community health worker segment of the workforce has been, well, complicated. A 2015 WHO report showed they yield a 10-1 return on investment, but they’re often unpaid and unaccounted for in formal health systems. And despite being uniquely positioned to reach families at the last mile—and crucial to the global effort toward universal health coverage—they often slip through the cracks when it comes to updated training, reliable and equitable pay, and policies that govern their work.

The WHO guidelines may mark a turning point. Since they were released in 2018, more community health workers have had opportunities to raise their voices at global events and more countries have begun accounting for them in their formal health systems. Some countries, like Ethiopia, have made impressive progress with their community health programs, while others are just getting started. Globally, we have a long way to go. 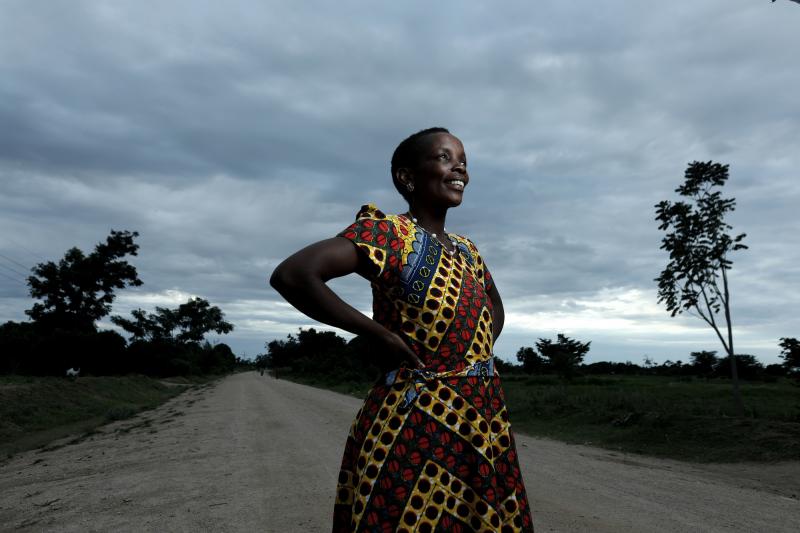 Nanzula Jagaja, a community health worker in Tanzania, goes house-to-house in her village to educate neighbors on HIV and tuberculosis. She's their link to formal health services. Photo by Josh Estey for IntraHealth International.

2017: US declared emergency over opioid crisis

While the United States declared the opioid crisis an emergency in 2017, the problem had been brewing for years. Drug overdose deaths were on the rise—in 2016 alone, they killed more than 60,000 Americans. The problem is so massive that it’s contributing to a decline in US life expectancy.

Now the crisis has spread to other countries around the world. West Africa, for example, is now dealing with its own opioid crisis, particularly in Nigeria.

"By now, Nigerians living with a drug use disorder outnumber, by far, people living with HIV and AIDS in the country," Nigerian officials said at a 2019 UN meeting on opioid trafficking.

Until 2018, there was no global system for collecting and sharing data on wartime attacks targeting health care. But hospital bombings, ambulance ambushes, and assaults on health workers—all violations of the Geneva Conventions—have been rising globally.

The Safeguarding Health in Conflict Coalition and others had advocated for years for the WHO to take the lead on documenting and addressing these attacks. And in 2018, it happened—the WHO launched its Surveillance System for Attacks on Healthcare.

The system now offers a searchable public dashboard and a breakdown of the types of attacks, such as whether they involved looting, sexual assault, or chemical agents.

There’s room for the system to get even better—the WHO doesn’t yet name perpetrators, for instance, and details about the basic facts of each attack are scarce. But it’s a start. The Safeguarding Health in Conflict Coalition is now using the data from WHO and other sources to push for additional actions to prevent and address these attacks. 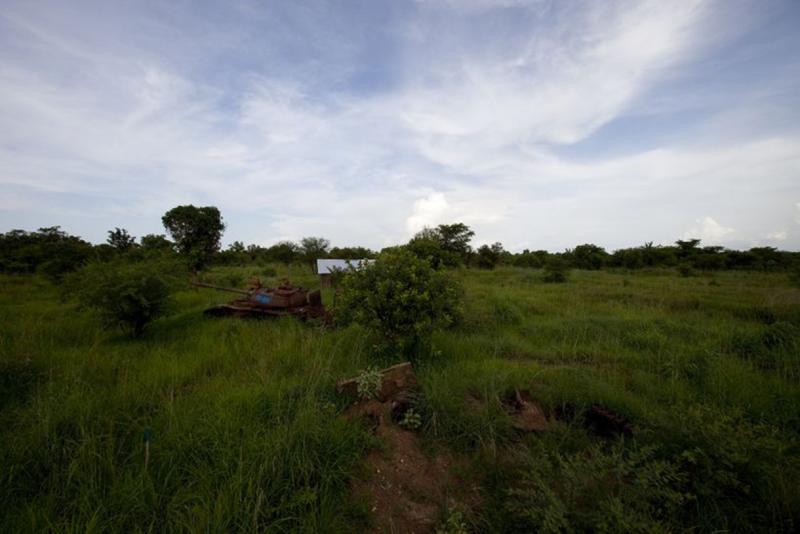 Signs of turmoil along a road in Yei, South Sudan. Photo by Trevor Snapp for IntraHealth International.

2019: The spotlight shifts to nurses and midwives

Nurses by far make up the largest portion of the health workforce around the world. The 2016 Triple Impact report found that empowering nurses could strengthen global health, improve gender equality, and build stronger economies all at the same time. And any hope we have of one day achieving universal health coverage depends on nurses and midwives.

But all too often, they’re are undervalued and underestimated.

This year, WHO announced that 2020 will be the Year of the Nurse and the Midwife. By shifting the spotlight to these health workers, we could be setting the stage for a decade of new progress—both for health care and for women’s empowerment.

Also read: Investing in the Power of Nurse Leadership: What Will It Take?

What were your big moments in global health during the 2010s? Tell us on Twitter at #TheFutureOf @IntraHealth