While cancer hasn’t previously been considered a major health problem in most African countries, it has emerged as a leading cause of death, especially among women of reproductive age. In Kenya, it’s the third-highest cause of morbidity, according to the Kenya Network of Cancer Organizations, just after infectious and cardiovascular diseases, respectively.

And although the government of Kenya has listed cancer screening as a priority in all public health facilities across the country, a shortage of health workers who have the right skills for cancer screening has slowed this program down.

As a woman, the training opened my eyes to the dangers of cervical cancer.

That’s why IntraHealth International’s FUNZOKenya Project is helping train health workers to screen for cervical cancer among women of reproductive age, particularly those who live with HIV. (Among Kenyan women, breast and cervical cancers are the most common.)

Priscilla Ng’ang’a, 33, is one of those health workers. She’s been a practicing nurse for nine years, primarily in maternal and child health clinics. And after she attended the five-day training on cervical cancer screening, she found a new calling as a screening advocate.

“As a woman, the training opened my eyes to the dangers of cervical cancer,” she says. “But the most important lesson I learned was that most women suffer in silence due to ignorance. I told myself that if I can help two or three women to take good care of their lives, I will do it.”

Women who live with HIV are five times more likely to develop cervical cancer than women who are HIV-negative, largely because HIV weakens the immune system and makes it more difficult for the body to fight infections that can lead to cancer—including the sexually transmitted human papillomavirus (HPV), which can cause cervical cancer. While cancer screening is a crucial part of health care for all women, it’s essential for those who live with HIV.

Priscilla is a nursing officer at Mlaleo Health Centre in Mombasa County, Kenya, and was the first from her facility to attend the training session.

“After the training, I came back and told the officer in charge that we should start cervical cancer screening,” she says. Since they began, demand has risen every month.“

Due to the high demand, we have set aside Thursday every week for cancer screening,” Priscilla says. “We screen between fifty and one hundred cases monthly.”

After the training, I came back and told the officer in charge that we should start cervical cancer screening.

The main challenge in providing screening at Mlaleo Health Centre, she says, is a lack of cryotherapy equipment to treat women found to have precancerous cells, which means clients often must be referred to the ever-congested Coast General Hospital.

“My message to women with HIV is that they should come for cancer screening at least once a year, especially when they are planning to have children,” she says.  “I want them to be sure of their health.”

Fatuma Likuyi, a community health volunteer who lives with HIV, credits Pricilla with saving her life. One day in July 2014, Fatuma was conducting her usual community outreach, encouraging women to undergo cancer screening when, she says, “I decided to lead by example.” And she screened positive for cervical cancer.“

I never thought I could be positive since I was not feeling any pain,” Fatuma says. “I thank Priscilla for her interest in my wellbeing. She referred me to a facility where I underwent therapy until the cancer was gone.”

The training Priscilla attended was facilitated by Pwani University, the National Ministry of Health with county ministries of health, and APHIIAplus partners. IntraHealth International’s FUNZOKenya Project is funded by the US Agency for International Development. 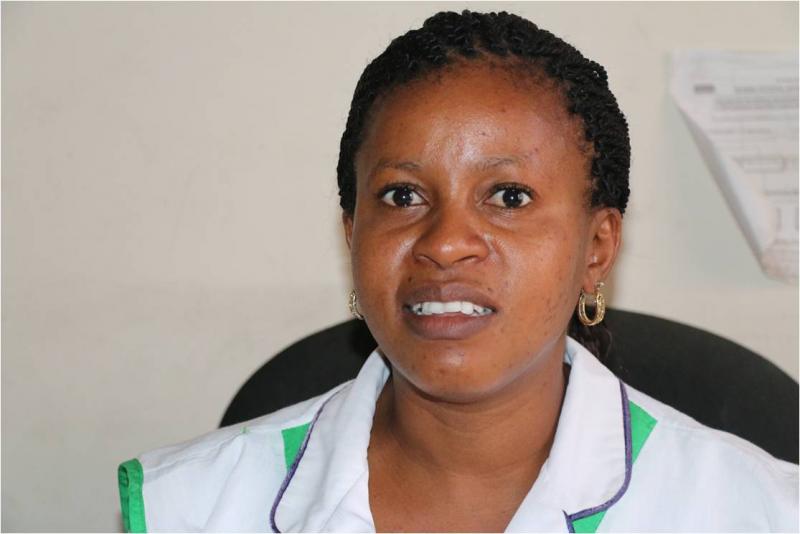 Priscilla Ngâangâa has been a practicing nurse for nine years, primarily in maternal and child health clinics. Photo by Peter Abwao for IntraHealth International.