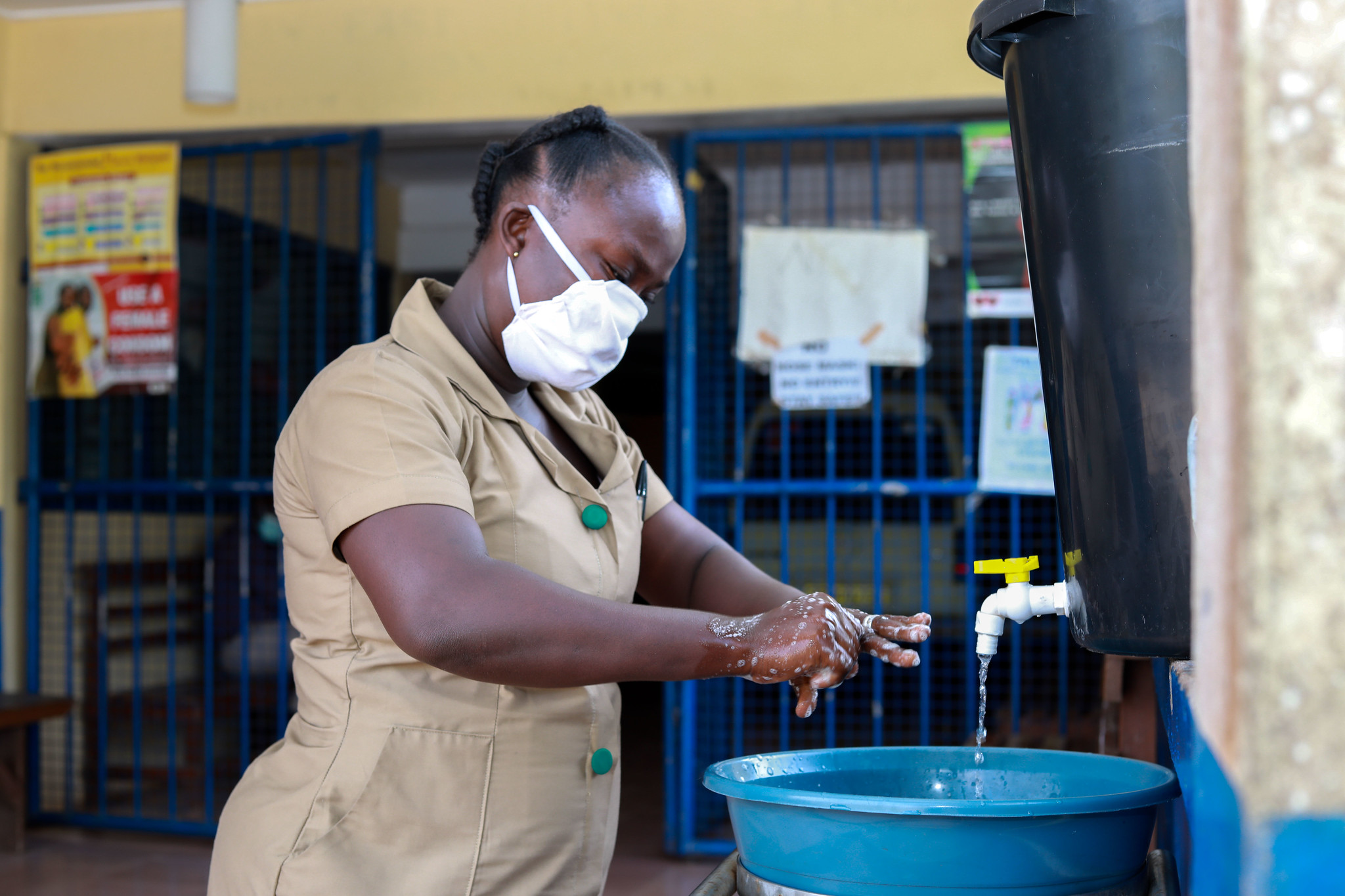 A month-by-month guide to the moments that captivated us most throughout the year.

We all know that the onset of the coronavirus pandemic—first in China and then worldwide—overwhelmed news coverage this year. And with good reason. It’s the first large-scale global pandemic in 100 years. At the time this article was published, it has killed more than 1.6 million people worldwide. And over 73 million people have been diagnosed with the infectious disease.

But a lot of other things happened in global health in 2020—and many of us may not have heard about them. Here are some of the moments we didn’t and won’t forget.

January: WHO launches the first-ever Year of the Nurse and the Midwife.

For the first time ever, the global health community shifted its gaze to a group of people we at IntraHealth International have been passionate about for 40 years now: nurses and midwives.

The World Health organization (WHO) declared 2020 to be their year as nurses and midwives lead us into the future of global health.

And nurses and midwives around the world were able to tell their own stories. From working in refugee camps to rural towns, to the front lines of COVID19 and beyond, these frontline health workers caught the world’s attention—even as the threat of COVID loomed.

Read the report: Investing in the Power of Nurse Leadership: What Will It Take?

A report from the WHO-UNICEF-Lancet commission highlighted the dangers ahead for children as they grow up in a world where climate change, migrating populations, conflict, inequality, and predatory commercial practices threaten their health and their futures.

Only a few countries have made progress on their commitment to the 17 Sustainable Development Goals agreed upon in 2015 and children will and have suffered because of it, putting their lives and the future of society at risk.

Read the report: A Future for the World’s Children?

In early March, the WHO realized how quickly COVID-19 was spreading around the world and officially declared it a pandemic. By then, 114 countries had reported cases of the virus and the United States had just over 1,000 confirmed diagnoses.

The WHO, International Council of Nurses, and Nursing Now published a report on the State of the world’s nursing 2020: investing in education, jobs and leadership, identifying challenges and opportunities in the global nursing profession to drive and sustain progress to 2030.

The report was published amid a health worker shortage that is at an all-time high, with 18 million more health workers needed to achieve universal health coverage by 2030 in low and lower-middle income countries. And health worker training—like this one in rural Mali—and advocacy institutions and alliances—like the Frontline Health Workers Coalition—have never been more important as frontline health workers battle COVID-19 while still providing essential services.

Read: We Asked Five Midwives What They See on the Front Lines of COVID-19

May: George Floyd is murdered.

The murder of George Floyd on May 25 in Minneapolis, Minnesota, sparked outrage, anguish, and a newfound urgency among Americans and American organizations to face the generations of systemic oppression and trauma Black Americans have endured. Global health organizations began looking hard at themselves.

“The effects of racism on public health have never been clearer,” said IntraHealth CEO Polly Dunford.

The power of the Black Lives Matter Movement grew in the US and around the world. At the same time, the pandemic’s disproportionate effects on people of color and women transformed two national movements into global ones, putting race and gender in the international spotlight.

Read: Here’s What We’re Doing to Make IntraHealth the Antiracist Organization We Strive to Be

The whole world celebrated when, in the middle of one pandemic, another infectious disease outbreak was declared over . The Democratic Republic of the Congo announced it had released its last Ebola patient from the hospital on June 25, after nearly two years battling the disease, over 16,000 frontline health workers providing services, and over 300,000 vaccinations.

“But viruses do not take breaks,” said WHO Director-General Tedros Adhanom Ghebreyesus.

Cases soon began to reappear. But lessons learned from the past ten Ebola outbreaks in the country made for a rapid response, and by November 2020, the Democratic Republic of Congo was once again Ebola-free.

Read: Preparing for Ebola, Then Coronavirus

July: Trump Administration announces US will withdraw from the World Health Organization.

While coordinating a massive global response to a pandemic, the WHO was notified by the Trump Administration that the United States would be withdrawing from the global institution, after initially halting funding in April.

Many global health leaders called this move reckless, as a withdrawal would cut the US out of global vaccine conversations, including current COVAX efforts, and other infectious disease responses. Additionally, it would hinder WHO’s relationships between the US Centers for Disease Control and Prevention and the National Institutes of Health, which have a combined 24 collaborating centers with the WHO, researching topics such as polio eradication, cancer prevention, and global health security.

After four years without a case, Africa became certified as wild polio-free, according to the Africa Regional Certification Commission. It was the result of vaccination campaigns, pressure from the international community, and determined health workers going door-to-door in regions all over Africa, some of them losing their lives to do it.

But while wild polio cases were being eradicated, vaccine-derived polio cases (remnants of polio strains from the oral vaccine) were still spreading. So the Global Polio Eradication Initiative announced the rollout of a new vaccine that would stop the spread of outbreaks caused by the vaccine itself.

In an announcement that shocked the international community, the HIV Prevention Trials Network study announced they had stopped their trial early because results were so effective. The trial, which enrolled over 3,000 women at risk for acquiring HIV infection across seven countries in sub-Saharan Africa, found that a single shot given every two months could be more effective at preventing HIV in women than a daily pill.

"This is a major, major advance,"’ said Dr. Anthony Fauci, the director of the National Institute of Allergy and Infectious Diseases. "I don't think we can overemphasize the importance of this study.”

Earlier in 2020, the United Nations announced that 690 million people around the world did not have enough to eat—and the number continues to rise due to COVID-19.

In a move that threw a spotlight on this growing problem, the Norwegian Nobel Committee awarded the World Food Programme with a Nobel Peace Prize “for its efforts to combat hunger, for its contribution to bettering conditions for peace in conflict-affected areas and for acting as a driving force in efforts to prevent the use of hunger as a weapon of war and conflict.”

This announcement highlighted the importance of food security and nutrition in communities around the world, especially since regions with high food insecurity are also facing significant health challenges from preventable diseases and climate change. And as malnutrition and hunger rates rise, so do disease susceptibility and mortality rates.

November: US election ushers in new leadership and a renewed focus on global health.

After his election win, President-Elect Biden suggested he would improve relations with multilateral organizations and partners, rejoin the World Health Organization, and stop cutting foreign aid funding by 30% every year.

His approach to COVID-19 also greatly differs from his predecessor. Just two days after the election results were declared, Biden announced his COVID-19 taskforce and promised to cooperate with countries around the world to coordinate coronavirus responses, a move that would also allow the United States to join the international COVAX Facility, which is working on the development, production, and equitable access to COVID-19 tests, treatments, and vaccines.

On December 14, Sarah Lindsey, a critical care nurse at Long Island Jewish Medical Center in New York, received the first coronavirus vaccine administered in the US.

“The shot was administered quickly,” reported Brian Mann of NPR. “She's been one of the folks on the front lines over the last 10 months caring for COVID-19 patients, putting herself at risk... These people—so vulnerable, put themselves at risk day after day.”

On December 2, the United Kingdom became the first country to authorize the vaccine rollout, and the United States’ Centers for Disease Control announced that health care workers and nursing home residents would be the first groups to receive the vaccine in the US.

The people administering those vaccines—and millions more to come—will be health workers.

A version of this article originally appeared on Global Health Now. Read it here.

Photo at top by lukasmilan.