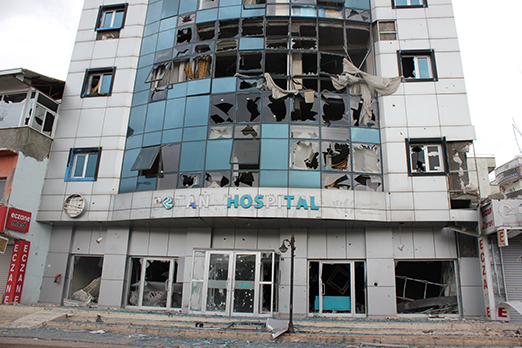 This hospital was damaged by clashes during a 79-day curfew from late 2015 to early 2016 in the city of Cizre in southeastern Turkey. Photo: Physicians for Human Rights

Even one attack on a health worker is one too many.

In 2012, two Pakistani health workers were out vaccinating children against polio when they were both shot by extremists. One of them died.

The other, shot in the leg, had 11 metal rods inserted into his leg and was hospitalized for three months.

In November, I met this remarkable man named Latif (his surname is withheld to protect his security). He is now fully recovered and back to work on the polio vaccination campaign. He told me he never considered giving up.

Pakistan reported only two cases of wild poliovirus in 2017 as of May 17 and Latif is determined to see the polio campaign through to the end.

The attack on Latif is only one example of a tragic phenomenon that is not getting better—violence against heath workers and health facilities. In 2016, the extent and intensity of such violence “remained alarmingly high,” according to a new report released by the Safeguarding Health in Conflict Coalition.

The report also found that accountability for committing these attacks remains inadequate or non-existent.

The violence isn’t always perpetrated by terrorists. Sometimes it is committed by the police or the country’s military—institutions that should be ensuring tranquility.

Most of us have heard of hospitals and clinics getting blown up or polio vaccinators getting shot but the report indicates that attacks on health care take many forms. It names eight different forms of violence:

The report documents attacks on health care in 23 countries in 2016. Most of the countries are in Africa and the Middle East but there are a few exceptions (Armenia, India, Myanmar, and Ukraine). The report was released on May 3, the first anniversary of the UN Security Council’s adoption of Resolution 2286 that set out a roadmap to the protection of health workers in conflict.

The Safeguarding Health in Conflict Coalition says the UN Security Council has failed to follow through on its own recommendations for preventing attacks and providing accountability for those who commit them. These recommendations include regular reporting to the UN on actions taken to prevent attacks, to investigate attacks, and to hold perpetrators accountable.

The U.N. Press Office did not respond to my request for a comment.

Attacks have increased despite the commitments.

“Our findings cry out for a level of commitment and follow-through by the international community and individual governments that has been absent since the passage of Security Council Resolution 2286 a year ago,” said Leonard S. Rubenstein, chair of the coalition and director of the Program on Human Rights, Health and Conflict at Johns Hopkins University Bloomberg School of Public Health in a press release issued on the anniversary.

The International Committee of the Red Cross, which has had a campaign called Health Care in Danger since 2011, says the attacks have increased despite the commitments. The slogan of the campaign is “Everyone wounded or sick has the right to health care.”

In Pakistan, doctors supervising the polio vaccine campaigns and police protecting community health workers were shot and often killed in a number of attacks. Many of these attacks took place in areas where wild polio virus is endemic. In August, a suicide attack at Quetta Civil Hospital in Quetta left 74 civilians dead and up to 112 wounded.

Though it targeted a group of lawyers and journalists who were mourning a colleague, this bombing was one of the deadliest attacks on a medical facility in the history of the region, according to the report.

In Mali, Human Rights Watch reported that on at least six occasions, ambulances and other vehicles used to transport patients and deliver health care were attacked or robbed. In four of these incidents, sick passengers, drivers and health workers were forced out of the vehicles and robbed and the vehicles stolen. In another incident, an improvised explosive device struck an ambulance that was headed to the scene of another IED attack that killed two peacekeepers.

Syria was the worse country in terms of intensity and impact of the attacks. Physicians for Human Rights reported 108 attacks on health facilities in 2016, most by the country’s own military and Russian forces, and the death of at least 91 health workers.

These are just a few examples of the many tragic incidents in 23 countries detailed in the report.

It is clear that these attacks can have profound effects on the availability of health care. They result in:

Accountability for such reports is largely absent, according to the report. A review by Human Rights Watch of 25 major incidents of attacks on health care between 2013 and 2016 found that either no investigations at all were pursued, or the investigations were inadequate.

As bad as the situation is, the numbers noted in the report may only be the tip of the iceberg because there are surely many attacks that go unreported. And the danger goes beyond the health workers who bear the initial brunt of the attacks.

“Although attacks on health workers are obviously dangerous for the workers themselves, they are also a danger to the communities they serve,” said Laura Hoemeke, director of communications and advocacy at IntraHealth International, one of the key members of the coalition. “If they do survive the attacks, many flee their communities and countries, leaving behind people with even less access to health care. This limited access has a particularly negative impact on maternal, newborn and child health.”

It is bad enough that anyone, anywhere has to do without health care. But to deny health care to those living in a state of war or unrest is unconscionable. As The Lancet commented, “One attack on a health worker is one too many.”