What I Learned from Working on the Ebola Response

I am an extrovert. I like meeting people, learning about their passions and sharing stories. I am not surprised where I fall on the Myers Briggs Scale — ENFJ; or that among my top strengths identified in StrengthsFinder 2.0 are empathy, positivity, communication, and winning others over.

These personality traits and my intense curiosity for the world drew me to a career in global health. I love traveling to places near and far to find solutions to health challenges.

The 2014–2015 Ebola outbreak in West Africa took me by surprise because I had a personal connection with Liberia. At the beginning of the outbreak, I traveled to Monrovia to conduct a training on health information systems. At this time, mid-May 2014, only a handful of Ebola cases had been reported in Lofa County, which is located on the other side of the country from the capital city Monrovia.

To be honest, any risk of Ebola didn’t cross my mind as I was packing my bags and preparing for the trip.

The training included participants from all of Liberia’s 15 counties. Tea and lunch breaks provided an opportunity to meet and greet each other and talk about life beyond our professional settings. I recall everyone congenially joking they would not shake the hands of anyone from Lofa County. I may have laughed, too. We had no concern that Ebola would spread beyond its current location.

Three months later, there were bodies in the streets of Monrovia. Schools were shut down, borders were closed, and flights in and out of Liberia were scarce. The world watched international news channels in horror as Ebola rapidly spread through Liberia and its neighbors Sierra Leone and Guinea.

The death tolls rose quickly, including many reported deaths of health workers.

Watching this news from my home in Chapel Hill, North Carolina, I was horrified and scared. What was life like for my friends whom I just met months earlier? How were all these people I just met coping with the tragedies I was seeing on television?Throughout the summer, the death tolls rose quickly, including many reported deaths of health workers — deaths that could have likely been prevented if the health workers had known how to protect themselves. This particularly struck me since my role in global health is centered on strengthening the health workforce.

For more than a decade I have committed my career to helping ministries of health address health worker shortages, supporting the efforts of schools to strengthen training programs for future health workers, and finding ways to increase support for those health workers on the job. So many of these activities focused on HIV, malaria, or maternal and child health — the “big” health issues we know exist in Sub-Saharan Africa.

No one ever talked about Ebola, and now it was killing so many people so quickly. The stories of health workers who were basically living in health facilities to treat patients and who ended up losing their lives to Ebola were particularly hard to hear. Knowing how to properly remove personal protective equipment (PPE) could have saved many lives.

On a hot, sunny day in late August, I joined my informatics director on a call with a UNICEF staff person based in Kampala, Uganda. We were meeting to talk about the interoperability of two systems — iHRIS, a health worker information system established by IntraHeatlh, and RapidPro, an easy-to-use SMS platform.

If the ministry could send rapid messages to health workers’ own phones, they could share life-saving information.

Interoperability is a fancy word for making the systems speak and understand each other’s language. We wanted to explore how ministries of health could use our two systems together to communicate with health workers. I remember the light shining through the office as we hatched the idea to use our systems together to support ministries of health responding to the Ebola outbreak. It made sense — if the ministry could send rapid messages to health workers’ own phones, they could share life-saving information about the Ebola virus and find out what health workers’ needs were on the ground in real time.

After that phone call, we got to work planning a hack-a-thon in Kampala for the following week so that developers could meet in person and hash out how the back end of the technology behind the two the systems would work. We invited other organizations working in system interoperability to join the hack-a-thon, too, and after a few phone calls, they were booking travel to Uganda to help. I loved seeing how enthusiastically everyone reacted to the idea that these technologies could make a difference in the Ebola outbreak.

We didn’t have a name for what we were doing. We didn’t have much money. But what we did have was a group of extremely committed individuals who were eager to come together to try to make something work — something that we believed would be of great use to ministries of health in West Africa.

We had teams working together and thinking creatively and innovatively about how multiple systems could work through health information system architectures. No contributor was proprietary. Our systems are open source, and we were flexing those muscles to truly make technologies work together.

This wasn’t about money or notoriety — it was about taking down Ebola.

While the developers were writing code and testing the technology, which we ended up naming mHero, I was working with colleagues to gauge whether this platform could be useful to the Ministry of Health and Social Welfare (MOHSW) in Liberia. I reached out to the same individuals I had met months earlier at the training on health information systems. When I heard their response, “I was waiting for you to call,” a wave of relief washed over me. I felt like I had a purpose and a meaningful way to at least try and help in the vast Ebola response.

Over the next few months, IntraHealth worked with the MOHSW and key partners including K4Health, JSI, UNICEF, and others, to implement mHero in Liberia.

Though the platform is built on systems that existed before the outbreak, it was still a new and sometimes difficult process to foster buy-in, train new staff to set up the workflows, and coordinate activities. We had to work together to determine what messages to send to health workers and how to triangulate the data from the health worker responses. We had to address data privacy and security and ensure the system we were designing could be used and scaled beyond Ebola.

As was the case for many others, this activity was “extracurricular” on top of my regular work schedule, so fitting all of the phone calls, emails, and other work in with my normal day-to-day work was taxing.

I knew others, too, were putting in long hours to implement activities to help the affected countries whose health systems had failed them. People were working around the clock to reverse the spread of the disease and halting the outbreak.

Just to give you a flavor of what was happening on the ground in the affected countries, here were some ways organizations were responding:

The response was enormous and enough to make your head spin, especially in those early days. Teams did what we have done for years: work in our own bubbles. People were well-intentioned but busy.

I don’t know exactly when the dynamic shifted. Maybe when people began seeing the same faces at the hotel breakfast buffet. Or when ministries began holding coordination meetings in country. Slowly, we learned about each other’s efforts and found ways to work together — to meaningfully collaborate and take action not only to save time and resources but also because we genuinely cared about our common goal.

That concept we always talk about in development, “leveraging resources,” was happening in small but important ways.

I observed this meaningful collaboration on field visits for mHero and also back in the United States. One collaborative effort that had the most impact was a 45-minute Friday morning phone call that I joined from wherever I was in the world every week hosted by the USAID Global Development Lab. Started in December 2014 as a way to coordinate the various eHealth and mHealth efforts, these calls allowed us to share what was working, what wasn’t, and what kind of support we needed from each other in the outbreak countries. We talked about mobile network operator bandwidth, technology enhancements, and much more.

Competition aside, we were committed to finding solutions.

What stands out to me the most about these calls and the collaboration involved in working to address the Ebola crisis is the transparency with which everyone began working. Competition aside, we were committed to finding solutions to help ministries of health and health workers in the outbreak.

In more than ten years working in global health, I had not seen this kind of dedication to collaboration, and it had a huge impact on me.

The numbers of new cases has dwindled to zero, Ebola Coordination Units are closing, and the media has found other stories to cover. It is Zika and not Ebola making headlines.

But I continue to carry with me important lessons I learned working on the Ebola response: When done with honesty and goodwill, collaboration can impart positive change. There is significant value in transparently sharing. Asking for help can facilitate greater success. It’s not bad to admit that a solution you tried isn’t working; in fact, that is how you learn.

My Myers Briggs and StrengthsFinder results are right on target for me and I’ve learned to really embrace those qualities, especially empathy and communication. Most importantly I have learned that meaningful collaboration exists. I will carry this experience and the wisdom I gained from it through the rest of my career.

This post originally appeared on the Exchange, a publication of the Knolwedge for Health Project. 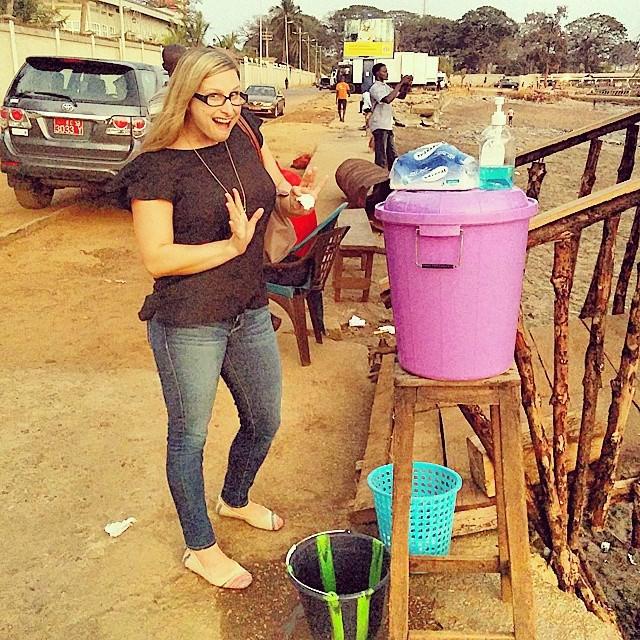 At a handwashing station in Conakry, Guinea. Photo courtesy of Amanda Puckett BenDor