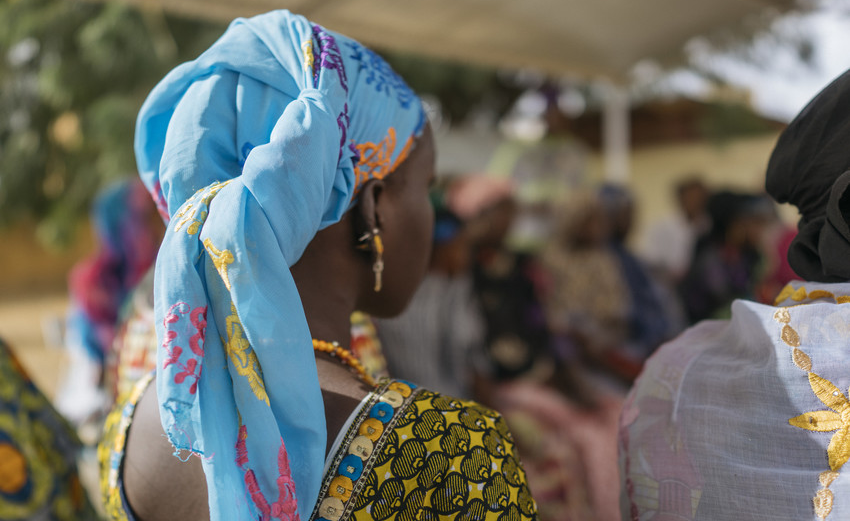 The mental health toll of obstetric fistula and other health-related traumas is great. Photo by Nana Kofi Acquah for IntraHealth International.

Need is growing by the hour.

The stomachache started soon after she gave birth to her last child, and it didn’t stop for years. When she finally made her way to a hospital, the doctors performed a hysterectomy—but it didn’t go well. A day later, she realized she was leaking urine.

“I told them something wasn’t right,” the woman tells us. “But they told me everything was fine and that I needed to go home.”

The woman says all this in a monotone as we sit under a tree outside the hospital.

The surgery had caused an obstetric fistula, which persisted over the next five years and forced her to go through several unsuccessful repair surgeries, until finally the last one—provided through IntraHealth International’s Fistula Mali project in May 2017—worked.

The woman says all this in a monotone as we sit together under a tree outside the hospital in Kayes, Mali, where her final surgery took place. Yes, we can take her picture, she says. But she doesn’t want us to show her face or use her name. Physically, she’s healed, but she doesn’t yet feel whole again. She still remembers the pain and isolation, the way family members covered their noses when she tried to visit them.

“People invite me over now, but I still refuse,” she says. “I’m in the habit of staying home and being alone now.”

A few months later, I was thinking about this woman as I sat in one meeting room after another at the 2018 Health Systems Research Symposium in Liverpool, UK. This is where thousands of experts come together every two years to discuss the latest findings in health systems and policy research and practice. There’s a lot to talk about, of course—HIV care, health services for young people, financing mechanisms, the eternal puzzle of community health worker programs.

Only a handful of times did the subject of mental health crop up in the program.

But in the field of global health and development, our inattention to mental health is a huge problem, and it’s only getting bigger.

The great and rising need

In India, mental health is the second-leading cause of disability. Kaaren Mathias of the Emmanuel Hospital Association told us this during a session on strengthening mental health services. In the Indian state of Uttarakhand, she said, there are seven government-employed psychiatrists for 10 million people. Compare this to Sweden, for example, where there are 2,320 psychiatrists per 10 million people.

India is one of many countries where mentally ill people are sometimes chained up by their necks, ankles, or wrists by family members and caretakers who don’t know how to care for them.

This happens in Timor Leste, too, Teresa Hall of the University of Melbourne told us. There is one psychiatrist for the entire country and families bear the burden of care.

Globally, 79% of suicides occur in low- and middle-income countries.

And in Ghana, where the treatment gap for mental health stands at 98%—meaning that only two out of every hundred people who need professional care can get it—unregulated traditional mental health centers step in to fill the gap. These are prayer camps, fetish priests, herbalists, and mystical and hypnotic practitioners, said Gina Teddy of the Ghana Institute of Management and Public Administration.

Many Ghanaians trust them over the formal health system, but because the centers are unregulated, they’re not held accountable for, say, overcrowding, imposing involuntary treatment, denying clients food or shelter or health care, or even chaining them up.

All of these examples are anecdotal, of course. But they’re all part of some troubling global numbers:

These numbers make it clear that we are not prepared. Even when it comes to meeting today’s mental health needs, our health systems fall far short. And for those who are displaced or war-weary or recovering from health-related traumas such as obstetric fistula or Ebola, the need is growing by the hour.

Plus, 42% of our worldwide population is under 25. Almost half live in South Asia and sub-Saharan Africa. The sheer volume of wide-ranging needs on the horizon will quickly overwhelm our existing mental health systems and professionals.

During her most despairing moments of living with obstetric fistula, she’d considered suicide, even attempted it.

There’s no easy solution. But by integrating mental health services into primary care and general health services at the community level, countries can start reaching more people in need. This is the strategy WHO is encouraging member states to adopt.

In Mali, I spoke with more than one woman who told me that during her most despairing moments of living with obstetric fistula, she’d considered suicide, even attempted it. So many said that before their repair surgeries, they felt abandoned, neglected, hopeless.