Five Big Questions for the Future of Global Family Planning

After the smallpox vaccine and the green revolution, modern contraceptives are one of global development's biggest game-changers.

It's no coincidence that as global use of modern contraceptives rose from 55% in 1990 to 63% in 2010, global maternal mortality fell by a staggering 45%. In 2013 alone, contraceptives prevented 77 million unintended pregnancies, 24 million unsafe abortions and the deaths of 125,000 women.

For less than the cost of a cheeseburger per American per year, we could reduce the world's population growth by 500 million.

Countries are catching on to the demographic dividends that come with robust family planning programs, which can help turn a low-income country into a middle-income country. (Just look at Indonesia, Thailand, and Singapore.)

In fact, for less than the cost of a cheeseburger per American per year, we could reduce the world's population growth by 500 million, saving mothers' and children's lives everywhere and helping poor countries prosper like never before.Over the next 15 years, as countries work toward the new global Sustainable Development Goals, we could make even faster progress. We could see more women empowered to make decisions about their own health and futures. Parents who can achieve the family sizes they want. And economic growth that outpaces population growth, resulting in healthier societies.

So what's the holdup? And who's being left behind?Some regions—particularly West Africa, where maternal death rates are among the world's highest and contraceptive use among the lowest—are missing out on this progress.

The reasons are complex: inequality, poverty, a shortage of health workers, cultural norms around family size, and Ebola, to name a few.

So before we reach the Shangri-La of universal health coverage and family planning services for all, we have some questions to answer.

1. Who still can't get contraception?

Around the world, 225 million women who want access to contraceptives cannot get them. And the poorer you are, the less likely you are to have access. This has a devastating generational ripple effect, which keeps the cycle of poverty going.

On the other hand, women who have access to contraceptives and the health workers who provide them tend to be healthier, get more education and have a better shot at earning wages. And so do their children.

Investment in family planning is an investment in reducing poverty, no matter which country you live in.

2. How can West Africa catch up?

Despite the region's (pre-Ebola) economic momentum, West Africa has lagged behind. In Mali, women have an average of almost seven children, though their ideal number is below six. And a woman in Nigeria has a lifetime maternal death rate of one in 29.

Not coincidentally, fewer than one in 10 West African women use contraceptives (Senegal is a shining exception). In Latin America and Asia, about two-thirds of women use them.

So we have a lot to do. We can start by supporting better policies around family planning, especially for health workers (who want to know they're not in danger of going to prison—or hell—for providing contraceptives to their clients). We can also take advantage of the mobile technology available today to share information and strategic messages about family planning, particularly with youth and the health workforce.

3. What do health systems have to do with it?

Imagine you're pregnant and ecstatic that your family is growing. You visit your doctor regularly, get good prenatal care, and when it's time to give birth, you know the facility will be staffed and ready for any complications.

That's often what pregnancy and childbirth look like when you have the benefit of a strong health system. There are a lot of moving parts—medical training, infrastructure, workforce planning, pharmaceutical supply chains—that come together to make a healthy birth a probability.

In a broken health system, everything is different.

Maybe you didn't intend to become pregnant in the first place. Maybe there is no doctor, or any health worker who can help you prepare for the birth. Maybe there are no medicines. Maybe there are complications, and you lose your child or even your own life.

It's time to drop the euphemisms that family planning dinosaurs hold dear.

When a country invests in its health system, it's more likely to have the data, infrastructure, planning, workforce, and contraceptive supply chains it needs to meet its population's demands, which will always include maternal and newborn care.

And it's more able to ward off other threats too, including epidemics such as HIV and Ebola.

4. Who will disrupt the status quo?

Youth, women, tech-savvy entrepreneurs, health workers, civil society, the private sector—these will be the big drivers of family planning change over the next 15 years.

And the rest of us will need to keep up.

It's time to welcome new voices to the table and drop the euphemisms and vague terms that family planning dinosaurs hold dear. "Family planning" itself is one, adopted to sidestep the taboo surrounding contraceptives. But truly, there is no controversy in contraceptives.

It's about young people, parents, future parents, and nonparents who want to have a say in their reproductive fates. As more women and young people throughout West Africa gain access to education and technology, more are demanding family planning services. And more will take steps to have fewer but better-educated, better-fed, healthier children.

In the US, it took 11 years from the time we found the most effective way to treat heart attacks before even half of American cardiologists were treating them correctly. We had the evidence right in front of us, and it still took over a decade.

But we can't afford to wait for slow progress in family planning.

To achieve real results, we need to reach out for new ideas and focus on what works. We need better national leadership and investment. We need to put future planning on the international development agenda. We need to tap into the great potential of status quo disruptors, and let them lead the way.

If we do, we may find that Shangri-La isn't so far off after all. 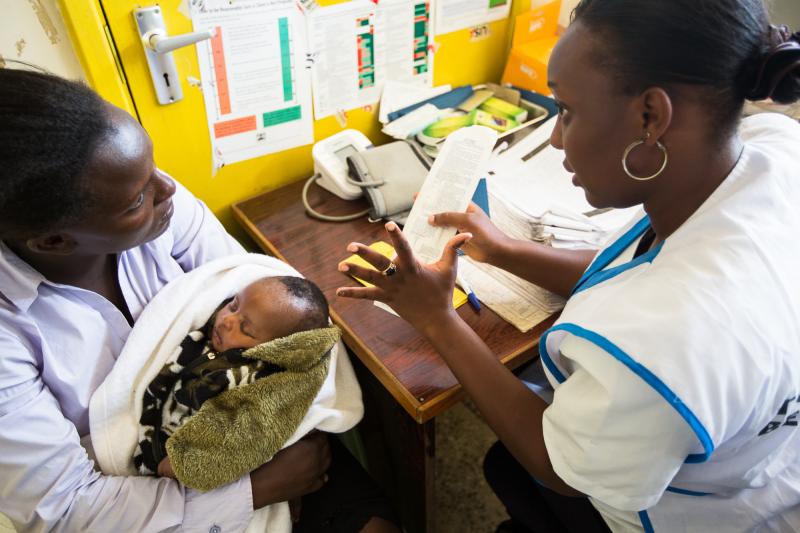 A nurse discusses family planning options with a client at the Mathare North Health Center in Nairobi where IntraHealth works. Photo by Trevor Snapp for IntraHealth International.