In Ethiopia, the Beat Goes on, in Music and Health

Last month in a chilly outdoor amphitheater at the African Union headquarters here, Stephen Levitin, aka Apple Juice Kid, asked an audience of mostly young Africans and North and South Americans to suggest the best type of beat.

"Slow and sexy Afro beat?" Levitin asked. "Or fast and danceable?"The consensus was fast and danceable. Then a percussive sound was chosen, and several of the young people—each in his or her mother tongue—recorded brief health messages of personal relevance to them.

And when they combined it all, the result was an original song. The group jumped to its feet and danced away the chill. Not a PowerPoint slide was to be seen anywhere.

And with that, Levitin and Pierce Freelon concluded another Beat Making Lab. Beat making—or composing music out of traditional rhythms and modern electronic techniques—involves using software to transform driving beats into original compositions. Freelon and Levitin, who both teach at the University of North Carolina at Chapel Hill, created the Beat Making Lab to reach communities around the world. They travel with an electronic music studio that fits into a backpack and train burgeoning beat makers to collaborate and use the equipment to make music.

But I wasn't at a music festival. I was at the third International Conference on Family Planning, at a session hosted by IntraHealth International. In a conference filled with speeches, PowerPoint presentations and inscrutable posters, beat making stood out for its liveliness, creativity and sheer fun. It offers a new approach for engaging young people to make informed decisions about their sexual health.

In June, IntraHealth partnered with the Beat Making Lab team to bring the experience to life for 20 young Ethiopians in Addis Ababa. Over the course of two weeks, they discussed family planning and other health issues and learned to create powerful musical messages for their peers in Ethiopia, where the unmet need for contraception among married women aged 15-19 is almost one third.

At the conference, several of the new Ethiopian beat makers showed how it works. One shared a spoken-word performance about her mother, who died giving birth to her because there was no health post nearby.

Jillian Gedeon, a college student from Canada, performed her rap, "Family Planning Saves Lives." It starts with:"I wanna tell you something that you may already know. But it's still a huge issue going on around the globe. It has to do with your mothers, daughters, sisters, and your wives. It's the importance of family planning and how it saves lives."

"There are two-two-two million women in the world who have an unmet need for the one thing that could save their lives, space their births, and give them the freedom that they need to keep going to school or have a business on the street.

"After the session, I sat down with Freelon, Levitin and Laura Hoemeke, IntraHealth's director of communications and advocacy.

What was different about the beat-making experience in Ethiopia as compared to the labs you've taught in the Democratic Republic of Congo, Panama, Senegal, and Fiji?

"Musically, in Ethiopia, the spoken word is really big," Freelon said. "We didn't come here thinking we'd do a poem beat. We came here and found out that was the scene in Addis Ababa and so we tapped into it. Same thing with the masinko, a traditional Ethiopian stringed instrument—a sampling of masinko found its way into our beats. Each community has a different type of scene.""Every city we've been to is unique," he says. "The students have radically different skills sets, interests and vibes. And the vibe in Ethiopia has been amazing."

Do you try to adapt to the local culture, or do you ask the students to adapt to your technology?

"I think of it as collaboration," Levitin said. "We're really interested in taking the traditional musical elements of a country and fusing them with modern genres like moombahton and trap. We're trying to be a fusion and a collaboration, more than just teaching and leaving."

So what does beat making have to do with health and family planning?

"The long-term vision for IntraHealth," Hoemeke said, "is that we help adapt the beat making curriculum into a 'future planning' training for youth. When I talk to young people, they aren't immediately interested in discussing contraception. But they are interested in music, culture, and their futures. And this is where talking to youth about using contraceptives and keeping themselves healthy starts to resonate. They all want healthy, productive and constructive futures."

Hoemeke thinks that with youth, family planning is a misnomer. Marriage and children often aren't even on their radar yet. She envisions a program that integrates reproductive health, sex education, contraception and general life skills into the beat-making curriculum. IntraHealth is now preparing to raise funds for this concept.

At the end of the June workshop, Music May Day and Save Your Generation—youth centers involved in the workshop—both received beat-making equipment. Youth who have been trained are welcome to use the equipment at the centers. And the centers themselves are organizing training opportunities for other youth, with those already trained serving as facilitators.

After the session, I talked to some of the Ethiopian beat makers. All of them said beat making had changed their lives. They intend to work in music, individually and as a group.

"We had no idea about beat making before," one young woman told me. "But now we are happy. We are perfect."Read more about the Beat Making Lab in Ethiopia here. 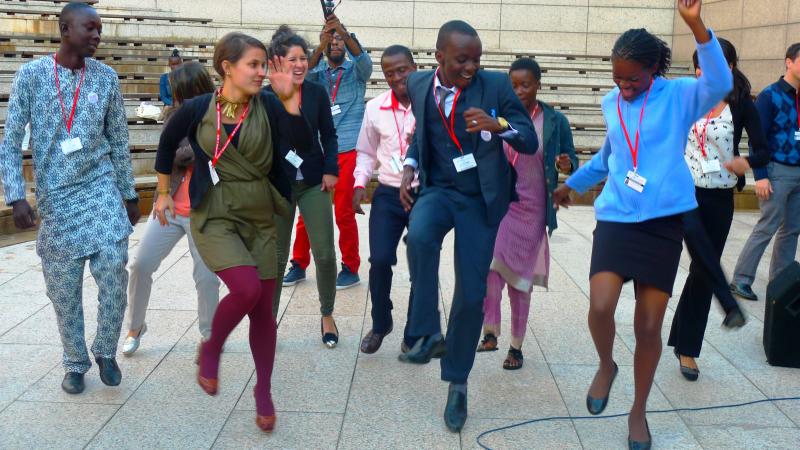 Global youth dance at the beat making session at the International Conference on Family Planning in Addis Ababa, Ethiopia.

Just published! A new article by our INSPiRE colleagues at @PATH on how to generate demand for an umbilical cord ca… https://t.co/X3SlLoAqiA