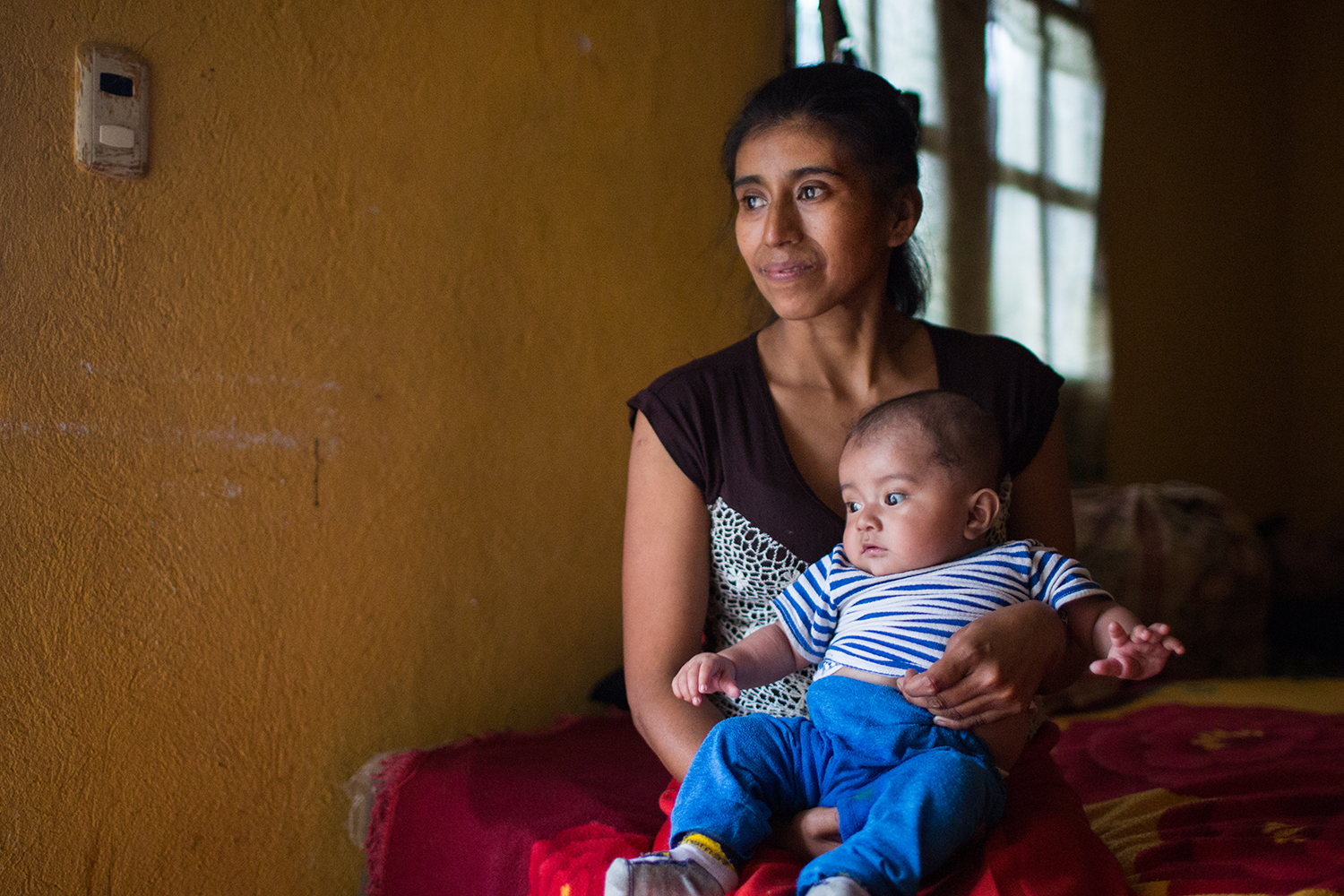 There are and always will be global health challenges to face. But there’s boundless hope, too. A mother and child wait for health services at Hospital Nacional Juan José Ortega in Guatemala. Photo by Anna Watts for IntraHealth International.

It’s not all bad news.

When we set out to compile our annual list of global health issues to watch this year, it seemed like all bad news. And true, that’s often what we deal with in global health—the problems that need tackling, the suffering we can help alleviate.

But then stories and columns like this one cheer us up. They remind us that no matter how complicated and frustrating our work may get, fighting back against poverty and inequality works.

There are and always will be global health challenges to face. But there’s boundless hope, too. And a field full of determined health workers and other humanitarians ready to do what’s right.

Now here are ten of the global health issues that will be most on our minds at IntraHealth International in 2018:

10. Sparks of innovation from unexpected places.

Speaking of news that makes us happy...

Have you heard of this pioneering new surgical procedure that’s saving the lives of babies born with hydrocephalus? It’s far more effective than the treatment doctors use in the US (a device called a shunt), which only works long-term about two-thirds of the time. And this new procedure was developed in Uganda. Now American doctors are traveling to Mbale to learn from the Ugandan physicians who invented it.

Creative advances like this are often born of necessity, in unglamorous, unexpected circumstances. (Take the Odón Device—it was invented in a kitchen by an Argentinian car mechanic and now it’s saving babies all over the world).

This year, we’re on the lookout for more unexpected sparks like this from around the world. In fact, we’re assembling a fiery ensemble of creative humanitarians and inventors for the mainstage at SwitchPoint 2018. (Hope we’ll see you there.)

Two decades have passed since a notorious paper published in The Lancet claimed a link between childhood vaccines and autism. It took years for scientists to discover the study results were fraudulent, and over a decade for The Lancet to retract the article. By then, the damage was done.

This one piece of fake news helped inspire public doubt in one of the most powerful weapons we have against human disease, and it persists to this day.

In the past few years alone, myths and misinformation have resulted in outbreaks of measles and mumps in the US and in the stubborn persistence of polio in Pakistan, Afghanistan, and Nigeria. In West Africa, they contributed to the deaths of over 11,300 people due to Ebola. False facts have the power to maim children, kill health workers, and stoke public health disasters.

Misinformation will likely affect global health in many ways in 2018, ranging from Internet-powered self-misdiagnoses to misguided policies around family planning and women’s health. We should all be watching very closely.

8. The HIV pandemic at a crossroads.

People under 30 today don’t remember a world without HIV. Many also don’t remember a time when the disease was not manageable with medication, or when AIDS was a spreading, terrifying mystery ailment that no one knew how to stop.

We’ve come so far since then. AIDS-related deaths have fallen by 48% since the peak in 2005, according to UNAIDS. We’ve even gotten pretty comfortable with the idea that we’re heading toward an HIV-free generation.

But we can’t take our momentum for granted.

The fact remains that in 2016, there were 36.7 million people living with HIV, including 1.8 million who were newly infected that year. Even in the US, the virus is still ravaging segments of the population.

Health workers worldwide are still learning how to best reach the key groups who are most affected by HIV. Widespread and insidious bias against them—including sex workers, men who have sex with men, and others—makes this tough. But if we ever want to see that HIV-free generation, we can’t let up our efforts.

7. The diseases we know—and the ones we don’t.

As global temperatures slowly rise, one of the greatest villains in the history of global health is enjoying a heyday. You probably know its work—malaria, West Nile virus, Zika virus, chikungunya, dengue fever...

The mosquito, along with other disease-carrying and crop-destroying pests, is thriving in a warming world. The result is a rise in diseases both familiar and unknown.

From new strains of influenza to age-old bubonic plague, emerging and re-emerging diseases are just one of the issues frontline health workers are usually the first to see. We count on them to sound the alarm, and cut off outbreaks before they become pandemics.

We’re also counting on them to help stem the tide of noncommunicable diseases, such as heart disease, stroke, and cancer, that now kill over 40 million people worldwide every year. More than 80% of these deaths occur in low- or middle-income countries.

As our diets and lifestyles change and so many of us live longer, the risks are rising.

In 2018, more cities will likely be making changes similar to the ones we’re seeing in New York, Ulaanbaatar, and Dakar, where mayors and other city officials are working to build communities that help people stay active and healthy.

There is no #MeToo campaign for women health workers around the world—but there should be.

Despite the fact that women make up the vast majority of the world’s health workforce, they occupy relatively few top spots. And they face rampant sexual harassment, discrimination, and even assault throughout their careers.

This year women around the world will face many of the same challenges they’ve always faced—fighting for the right to an education, gaining equality at work and at home, and getting access to family planning, safe childbirth, and other types of health care. Because of the roles women play in their families and communities, their health and well-being affect more than just themselves—in fact, they could sway the fortunes of our global economy.

So will 2018 be different for women around the world? In some countries, the mood is shifting. Some prominent men who’ve preyed on women for years with impunity are now being held accountable, publicly and severely.

We hope this isn’t just a blip in women’s history, but a step toward something big.

5. The evolution of the health workforce.

Millions of young people will pour into the global job market this year. All want jobs that pay decent wages, but many want something more—a sense of purpose, a job where they can help others. A career in health care can offer both.

The skills health workers need are changing, too. Many health workers around the world are now facing challenges they may never have imagined, much less trained for.

Hurricanes, earthquakes, and wars make even the most routine care difficult. During disasters, trauma victims fill hospitals to capacity, the power goes out, and health workers have to think and work fast.

The health workforce of the future will have to be ready for anything.

Officially, the death toll from Hurricane Maria in Puerto Rico last September was 64.

But that doesn’t include people who died because they needed dialysis after the power went out. Or who had heart attacks or strokes or heat exhaustion for which they couldn’t get care because of the chaos and destruction, and which they might not have experienced at all if Maria had never hit.

“Most people in Puerto Rico just don’t believe [the official death count]—they believe it’s much, much higher,” says NPR’s Marlon Bishop. “The office that records demographic data in Puerto Rico, they’ve reported that in the first 40 days after the storm, about 1,000 more people died than in the same period the year before.”

It will take years for the people and health system in Puerto Rico to recover.

In 2018, we’ll be working to help health systems around the world build the resilience they need to keep providing services in a new, stormier world.

3. Our mental health and well-being.

When a 7.0 magnitude earthquake struck Haiti in 2010, over 200,000 people died. In its aftermath, almost a quarter of the surviving population experienced post-traumatic stress disorder. Even more experienced a major depressive disorder.

Last year, US stress levels rose on a national scale between January and August. According to the American Psychological Association report Stress in America, more than half of Americans feel that this is the lowest point in our nation’s history.

Political unrest and uncertainty, the trauma of natural disasters or gun violence, the stressors of disease and chronic poverty—all of these weigh on us and affect our mental and physical health. In fact, poor mental health is often the root cause of other health conditions.

Oh, and let’s not forget the role of technology. We’re more connected than ever, and yet we’re lonelier than we’ve ever been. In the US, rates of teen depression and suicide began skyrocketing at almost exactly the same time that smartphone ownership in our population surpassed 50%. In the UK, a new minister for loneliness is working to combat the isolation of modern life.

It’s striking that nowhere in the Stress in America report or in the World Health Organization’s Mental Health Atlas will you find the words technology, smartphone, or social media—yet.

2. The effects of violence on health care and us all.

In Syria this month, there were ten attacks on hospitals in the span of ten days. At least one was a maternity hospital.

Deliberate, calculated assaults on health facilities are now a routine weapon of war. They kill both patients and health workers, and they are devastating to vulnerable health systems. Not to mention they violate the Geneva Conventions.

A 2017 report by the Safeguarding Health in Conflict Coalition found that the extent and intensity of violence against health workers globally remained alarmingly high in 2016. There were attacks in at least 23 countries in conflict. It also found that there is little to no accountability for those who commit these crimes.

The coalition is working on its 2018 report now, which will detail attacks in more countries than it’s ever had to cover before. Stay tuned.

Today, one in every seven people on the planet is on the move. That’s 1 billion migrating individuals—more than ever before.

Refugees and other migrants face distinct challenges when it comes to accessing health care, including language and cultural differences, unfamiliarity with local health services, and, often, the vulnerability that comes with being displaced and powerless in a foreign land. They also have diverse needs, from migrant farmworkers who’ve been exposed to toxic pesticides to refugees who’ve been traumatized while fleeing warzones.

War, genocide, and famine drive people from their homes, and as people move, diseases move, too. The global health implications of today’s refugee crisis will loom large in 2018 and far beyond.

What are the big global health issues you’re watching this year? Tell us all about it on Twitter and Facebook.