From Zero Doctors to Three: A Transformation at Bukwo General Hospital

Imagine you and 74,000 other people all had access to just one doctor. That used to be Uganda's Bukwo District. 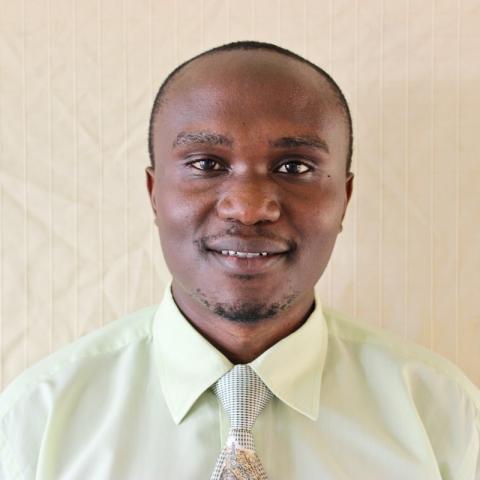 Imagine a woman enduring a two-hour motorcycle ride on a bumpy road as she suffers with obstructed labor. And imagine that when she arrives at the hospital, which serves over 4,000 clients, it does not have a single doctor on staff.

In fact, imagine that she and the 74,000 other people living in her area have access to just one doctor among them.

This is not fiction. Until recently, it was a true reflection of Bukwo District in eastern Uganda.

Bukwo District, owing to its mountainous terrain, is listed among the hard-to-each districts of Uganda. Until August 2015, the region’s doctor-to-patient ratio (1:74,101) was far worse than the already worrisome national ratio of 1:24,725.

Consequently health services were at a record low. There were maternal mortalities arising out of complicated pregnancies. Fewer than 19% of women sought the recommended fourth antenatal care visit. Malaria, pneumonia, coughs, intestinal worms, and trauma were listed as common causes of morbidity.

The region’s one doctor was assigned to administrative duties as district health officer, which took her away from the district most of the time. Clients with complicated conditions were referred to either Kapchorwa—two hours away on a road marked by potholes, protruding rock, steep hills, and valleys—or across the border into Kenya. Many would die in transit. A referral often felt like a death sentence, yet for many clients the only alternative was traditional medicine.

Meanwhile, morale among the staff at Bukwo General Hospital was also hitting a record low. When I visited the hospital, a midwife named Juliet told me that life was very frustrating. She hated her job and contemplated moving to another district or abandoning the career altogether when she watched clients who needed a doctor’s touch die.The district needed more doctors. They had tried to recruit more in the past but failed to attract them, and now the hospital had neither wages for new doctors or funds to support the recruitment process.It was at this moment that IntraHealth International, through its Strengthening Human Resources for Health (SHRH) project, was working with the Ministry of Health to conduct a staffing situation analysis.

They revealed glaring gaps in the health workforce—including that at Bukwo General Hospital—and worked with the ministry to advocate for increased wages for Uganda’s health workers (low wages are one reason health workers leave rural regions such as Bukwo). IntraHealth helped place a central advertisement for doctors and monitored the recruitment process while working with the local government and the Ministry of Health.

The result: three new doctors for Bukwo. The doctor-to-patient ratio has improved and referrals for complicated pregnancies have gone down, as have their associated costs and risks. People have regained trust in the medical services there and more often seek care at the hospital. Traditional birth attendants are no longer conducting most deliveries, but are being supported by the development firm Elgon Hydron-SITI to escort the mothers to health facilities, where the women can give birth safely.

Serving my people is an honor. It’s the only thing I can do to give back to the community.

One of the new doctors is Satya Collins, now medical superintendent of Bukwo General Hospital. He was recruited with IntraHealth’s help in August 2015 as a medical officer. With the new leadership and expert oversight that Satya and his colleagues are providing, staff at the hospital are becoming more confident in their work. They now have leaders to look up to, and work is less stressful. Juliet says she now enjoys practicing midwifery in Bukwo district.One client, Mr. Yeko Isaac, could not help but cut a million-dollar smile, despite his pain, when he spoke of his treatment for a traumatic injury. He had visited the hospital before, he said, during the grimy days. But now he is much more confident in the treatment he receives. “Serving my people is an honor,” Dr. Satya told me. “It’s the only thing I can do to give back to the community.”

My interview with Dr. Satya was cut short as he rushed away to scrub and carry out an emergency surgery on a mother with obstructed labor.

As he disappeared into the operating room, I could not help but wonder what would have happened to that mother and her baby had a doctor not been available.

IntraHealth and Uganda’s Ministry of Health have worked together to deploy 7,211 newly recruited health workers to 1,030 health centers across all 111 districts of Uganda. Now we are working to recruit 9,000 more health workers, which will bring the percentage of filled positions in government health facilities up from 66% in 2013 to 83% by 2018.

IntraHealth’s work in Uganda is funded by the US Agency for International Development. 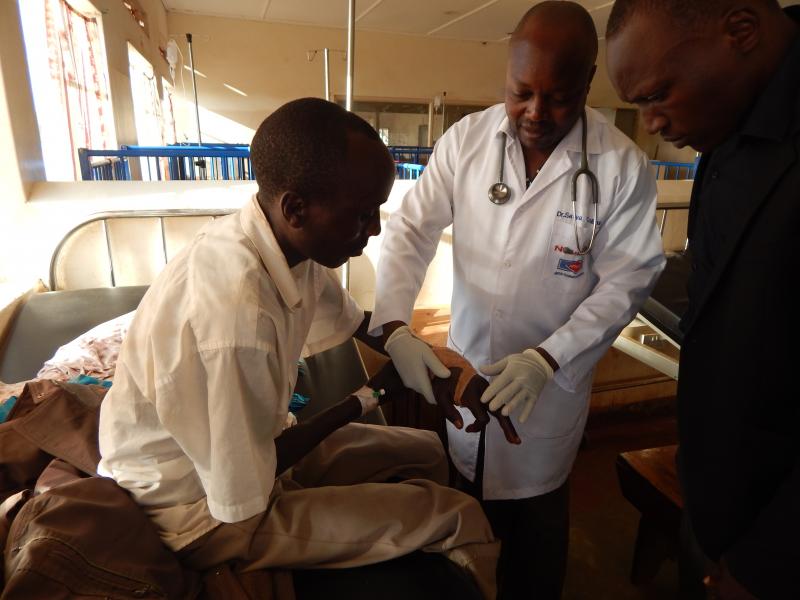 Dr. Satya attends to a client with an injured hand. Photo by Peter Sagabo. 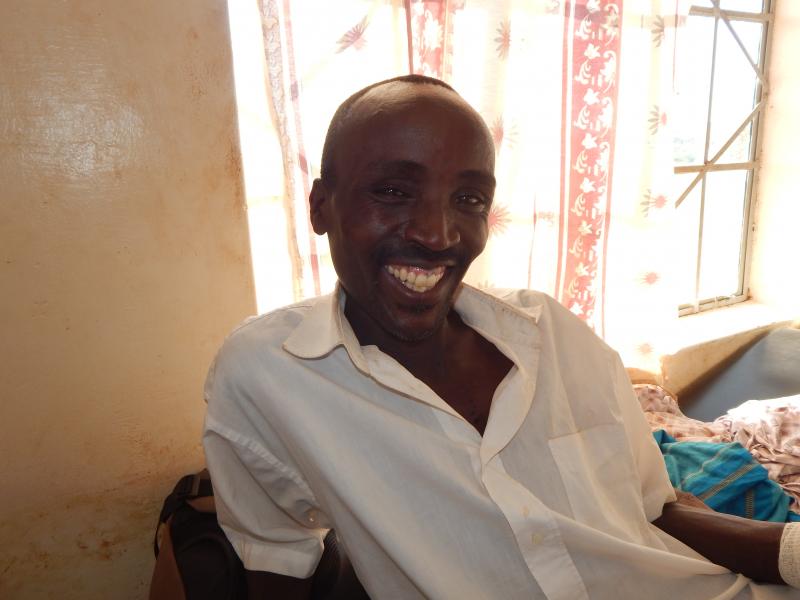 A client named Yeko Isaac could not help but smile when he spoke of his treatment for a traumatic injury at Bukwo General Hospital. Photo by Peter Sagabo. 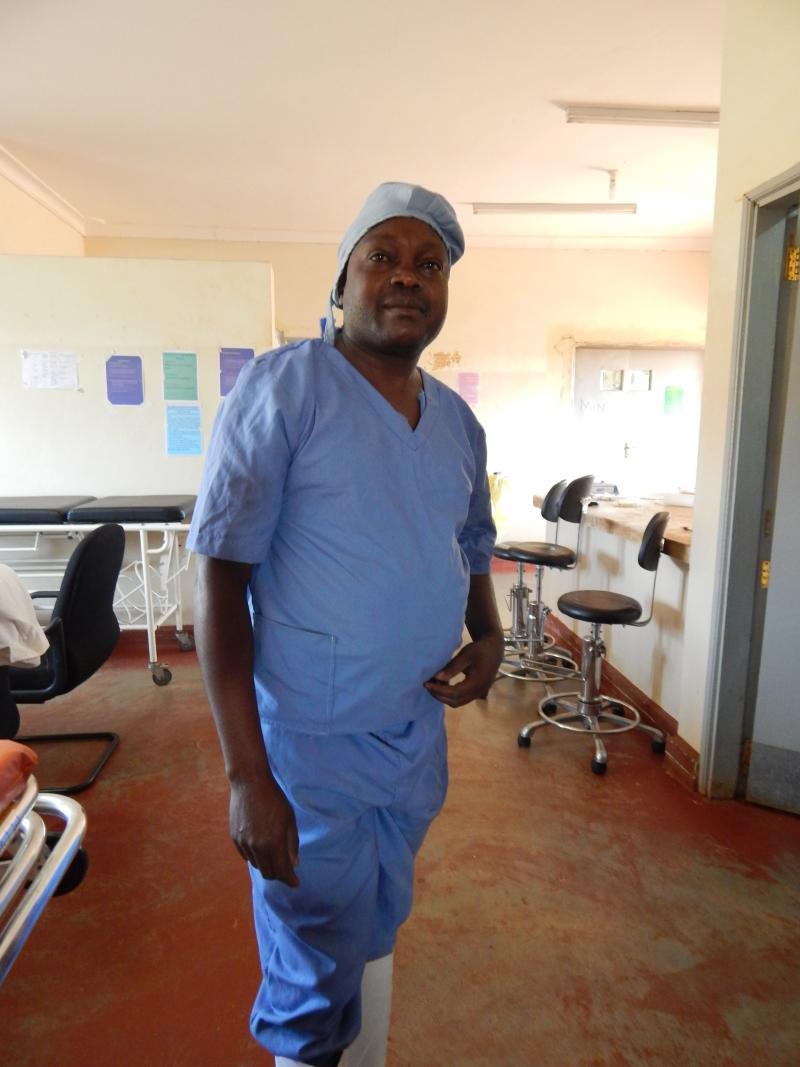 Dr. Satya in scrubs, ready to save the lives of a mother and child. Photo by Peter Sagabo. 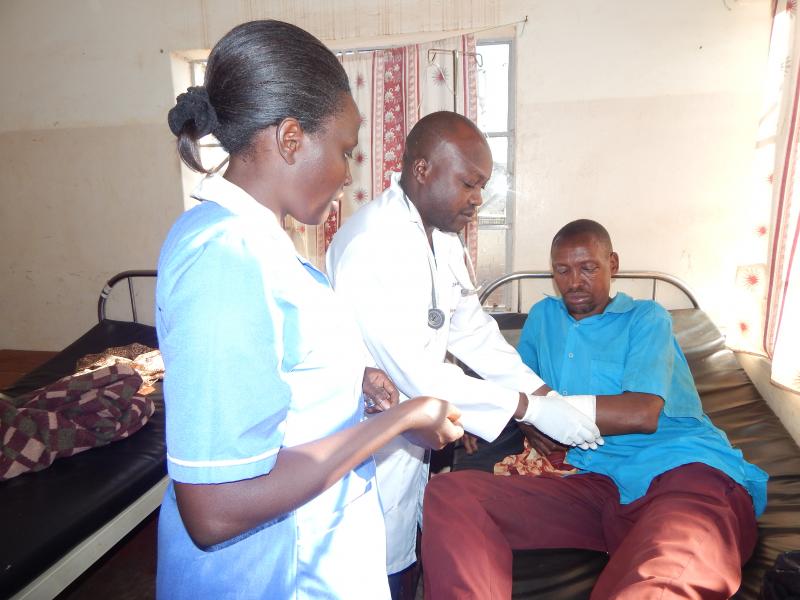 A nurse stands with confidence by the side of a doctor as they review a trauma case. Photo by Peter Sagabo.