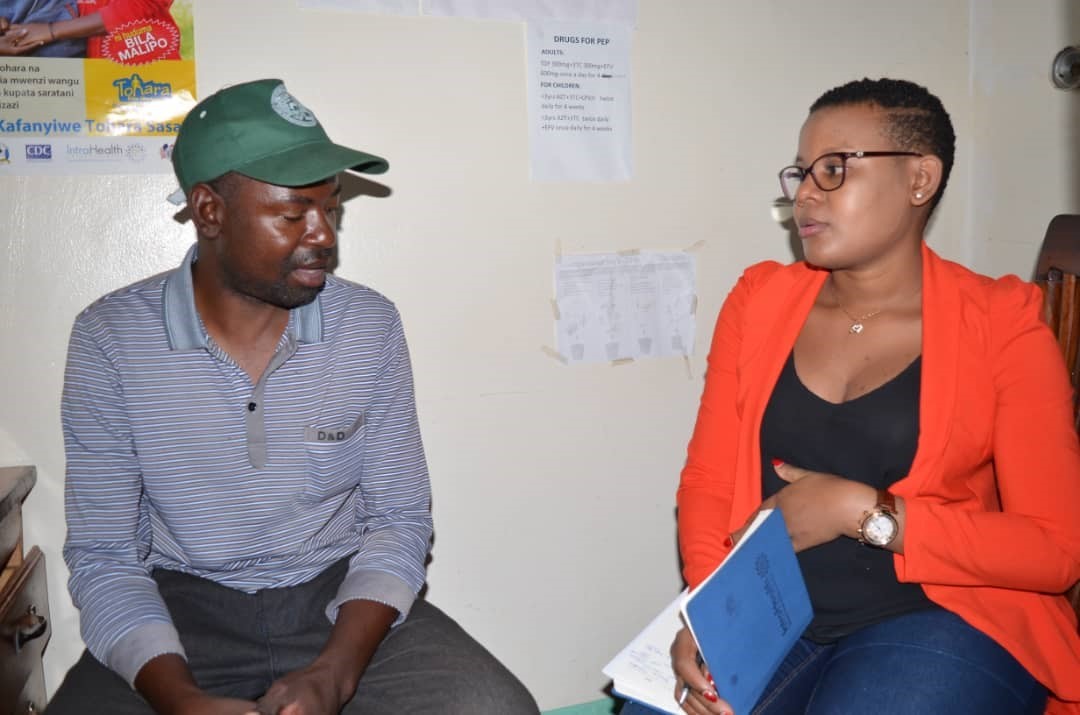 Sugarcane harvesters are spreading the word about the protective benefits of voluntary medical male circumcision.

One morning in May 2019, I met Hamisi Kuya (36), a father of two who received voluntary medical male circumcision (VMMC) services through IntraHealth International.

Hamisi lives near Kagera, in the northwestern corner of Tanzania, where he has been working at the Kagera Sugar Plantation for some years.

In his area, like in many communities in the region, many people believe that the VMMC procedure is very painful and takes a long time to heal. For some of them who are sexually active, the prospect of abstaining from sex for six weeks while healing is discouraging.

"After the benefits were explained to me, I became less worried about the pain and I decided to go to the clinic for the service.”

Hamisi, however, learned that VMMC could help protect him from HIV, reducing his risk of acquiring the virus through heterosexual intercourse by about 60%.

So, unlike some of his peers, Hamisi decided to take a daring step.

“When I first heard of VMMC during a meeting with service providers from Kagera Sugar Hospital, I was so scared to go for it because I believed that it was a very painful process,” Hamisi says. “I told myself that circumcision was not for me, nor for my family and generation. However, Dr. Yustina—a medical male circumcision provider—approached me and explained the benefits of VMMC in detail. I became less worried about the pain and I decided to go to the clinic for the service.”

Since December 2018, IntraHealth has been conducting workplace interventions in the Kagera region focusing on adult men (over 20 years of age) as part of its Tohara Plus project.

We collaborate with facility management to organize VMMC outreach campaigns—an approach that reaches more adult men who are not able to visit health facilities because of their work schedules.

IntraHealth organizes meetings with employees to announce service availability, installs mobile clinics/tents at workplaces such as the Kagera Sugar Plantation, orients them on benefits of VMMC, and provides services at the same place.

Hamisi and his peers are now ambassadors to their communities.

Due to the distance (about 30 km) from where Hamisi and his coworkers live, IntraHealth collaborates with hospital management to provide post-surgery transportation for clients. This keeps them from using motorcycles or walking long distances, which may cause injury.

“My wife supported me a lot during the healing period, as I explained to her that not only VMMC protects her from cervical cancer, but also protects us from HIV, sexually transmitted diseases, and improves my personal hygiene,” he says. “She was also ready to abstain from sex until I was completely okay.”

Workplace interventions in the Kagera region marked a turning point for many men in Hamisi’s community. After a successful recovery, Hamisi has taken it upon himself to talk about his experience and has encouraged his friends and coworkers to pursue VMMC services.

“Our company gives us a three-day excuse of duty note after surgery and after that we are given light work around the factory instead of harvesting sugarcane,” he said. “As for me, it took only one week to be okay and continue with my normal activities. This encouraged more adult men to go for VMMC, as most of us were afraid due to the nature of our jobs.”

Hamisi and his peers who have received VMMC are now ambassadors to their communities, helping young and adult men learn more about the protective benefits of VMMC and referring them to the service.

“We wish we could provide services to large numbers of adult men at once, but they have to come in batches as they also have to work at sugarcane plantations,” says Dr. James Gesimba, a regional technical advisor for IntraHealth’s VMMC project in Kagera. “But industry management always assists in releasing their employees for this important service.”

The Kagera Sugar Plantation spans 17,000 acres and has a community population of more than 11,000. According to Dr. Ivan Athaide—the Kagera Sugar Hospital medical officer in charge—hospital management, IntraHealth, and the Tanzanian government have been cooperating to increase employee awareness of HIV in their community and create a sustainability plan for VMMC services, including providing equipment and support to service providers to safeguard the standard of services.

“Our hospital not only receives staff but also people from outside the industrial area, because we provide all services free of charge,” says Dr. Athaide. “We also spread awareness to women who visit here because they help to influence their partners to opt for VMMC.”

The IntraHealth International Tohara Plus project is a five-year VMMC project funded by the U.S. President's Emergency Plan for AIDS Relief (PEPFAR) through Centers for Disease Control (CDC) Tanzania.