Winifred, a Health Worker On Call

She was known simply as Omusirishi—“the one who treats”—in my village.

She was known simply as Omusirishi—“the one who treats”—in my village.

This was Winifred, the village nurse whose status was akin to that of a chief. She knew every corner of the village and was revered by everyone there and in neighboring villages. You would rarely find her in her home because most of her time was spent moving from house to house, attending to people with ailments ranging from malaria to cholera to burns to snake bites.

My mother was not about to risk losing her youngest daughter.

One day when I was about ten, my younger sister, Lydia, fell very ill in the middle of the night. Kenya’s Kakamega region, where I grew up, receives very heavy downpours during the long rainy season. On this particular night, it had rained heavily, and as 90% of Kenyans were without electricity in those days, it was very dark and scary.

My mother was not about to risk losing her youngest daughter and, this being before the era of mobile phones, there was only one way to get Winifred to come.

In my sleep, I heard my mother shout my name and that of my elder sister, Sarah. She ordered me to run and fetch Omusirishi from her home about two kilometers away while Sarah boiled water. (In those days it was common for local health workers to disinfect needles using boiling water, as most local health workers had just a couple of needles to use on several patients.)

I thought of losing my beloved little sister, only six months old at the time. It gave me the strength to overcome my fear of the darkness and the ferocious dogs Winifred kept.

Indeed, I arrived at Winifred's home to a loud and incessant barking that nearly sent me scampering. But in fact, the barking of her dogs at night alerted Winifred that someone needed help.

She promptly came out of her house armed with her tools and simply asked, “Who is it?”

I explained the details as we made our way to my house. When we arrived, the water was already boiling on the fire. Winifred went straight to work.

She gave an injection and some oral medicine, which I later came to conclude was some form of paracetamol. She assured my mother that all would be well and promised to check on Lydia the following day.

When she returned, my sister was fine.

My mum did not have any money to pay Winifred for her services, so she gave her a kilogram of maize, which at current value is about half a dollar.

Today my sister Lydia is a grown woman with children of her own. If Winifred had not responded to her call of duty, my sister might not be the woman she is today. Winifred , now in her seventies, embodies the true spirit of Kenya's health workers, who are always on call and ready to serve.

It is for this reason that on this Valentine’s Day, I want to show my love for all health workers everywhere!

Has a health worker changed your life? Join the conversation and spread the love! #IHeartHealthWorkers 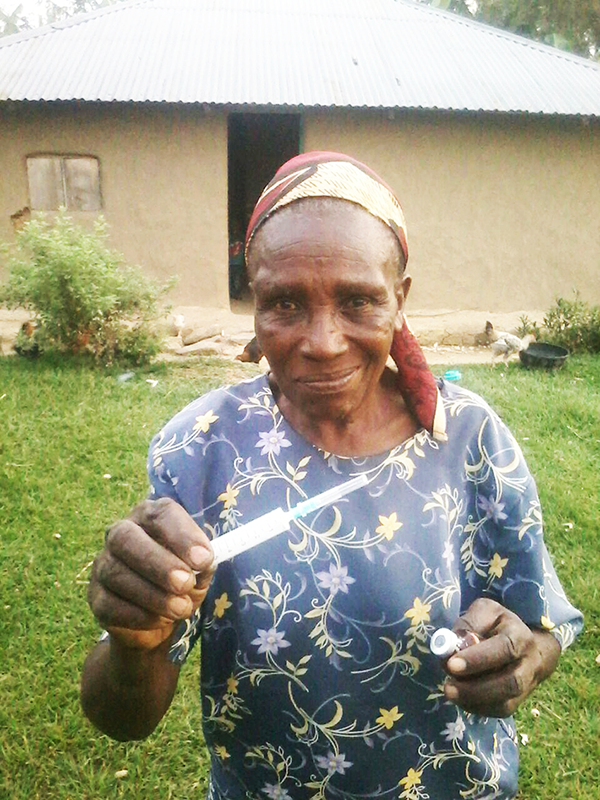 Winifred's status was akin to that of a chief. She knew every corner of our village and cared for people with malaria, cholera, burns, snake bites, and more. Photo courtesy of Peter Abwao.

From Community Health to the Front Lines of COVID-19

Join @GlblCtzn's campaign to end #COVID19 and kickstart a global recovery — a year-long mission to build a healthie… https://t.co/gwqyNQIDZT