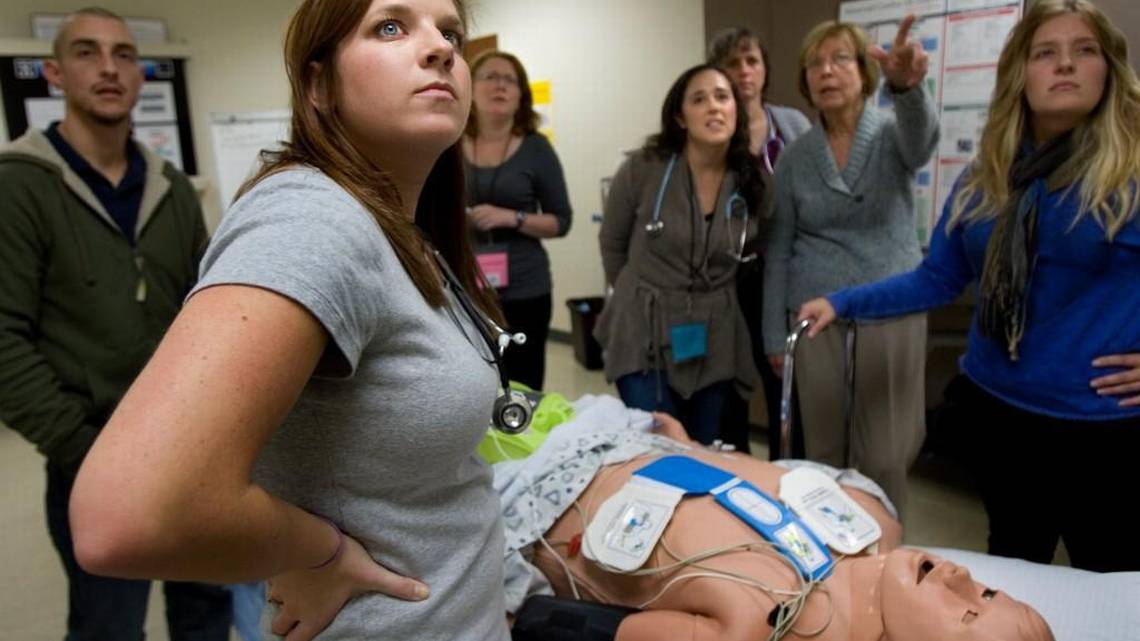 University of North Carolina nursing school students watch the monitor as they get hands-on experience with a human patient simulator during a class at the School of Nursing in Carrington Hall on the UNC-Chapel Hill campus. Photo by Corey Lowenstein, courtesy of the News&Observer.

In just six years, there could be over a million vacancies for registered nurses. But we can still avoid it.

By 2025, North Carolina is projected to have the second-largest shortage of nurses in the nation—a deficit of nearly 13,000—according to a recent Georgetown University report. Already, our rural populations lack adequate access to medical care because of physician shortages, and restrictive policies that limit the advanced practice of registered nurses in the state make the problem worse.

Of the 80 rural counties in North Carolina, 70 are currently designated “medical deserts” for their lack of primary care care that nurses could help provide if licensed to do so.

There is a rich research base showing the positive impact of nursing on public health—as well as the public’s perception that nurses have the highest standards of honesty and ethics among American professions. Yet barriers to nurses practicing in both generalist and advanced roles remain in many places, in North Carolina and beyond.

We need a flexible workforce, able to work to the top of its various licenses.

Some of these barriers are simply resistance to adapting to the changing landscape of health care, which, everywhere, is becoming more sophisticated—and more expensive. If health systems are to survive, we need to look at costs and effectiveness, not cling rigidly to old roles and professional barriers.

In North Carolina, a Duke University study has shown that less restrictive regulation of Advanced Practice Registered Nurses would create at least 3,800 new jobs, decrease the effects of physician shortages, and produce annual health system cost savings in the hundreds of millions of dollars.

On Feb. 27, Chapel Hill was the official US launch site for Nursing Now, a global campaign to improve the status and profile of nursing. Other launch sites were London, Geneva, Kampala, and Singapore.

The man behind the campaign, Lord Nigel Crisp, is well known in the UK as a one-time head of the National Health Service, but not until now as a champion of nurses. He is a convert. He says that nursing’s time has come. Nurses must be recognized for their potential to care for the millions of us who live with a chronic disease, need skilled care as we age, or want compassionate support while we undergo sophisticated medical treatments.

IntraHealth International and the University of North Carolina School of Nursing have joined forces to bring this launch to Chapel Hill because we strongly believe that supporting and valuing nurses is as important for North Carolina and the United States as it is for the rest of the world.

The Bureau of Labor Statistics estimates that by 2024 there will be over a million vacancies for registered nurses—twice as high as previous shortages. One challenge to training newly qualified nurses is the serious shortage of faculty and clinical placements in nursing schools. Each year around 50,000 prospective (and qualified) nurse students are turned away. Today’s nursing programs need growing financial support just to survive.

Nursing Now is promoting the essential role that nurses play in today’s health care system and advocating not only for adequate funding for education and jobs, but also for the recognition that nurses are skilled, competent professionals, with many complex roles.

In 2010 the Institute of Medicine (IOM) released its landmark report, The Future of Nursing: Leading Change, Advancing Health. The report recommended that nurses should be working to their fullest potential, supported by legal scopes of practice, and it provided an excellent blueprint on how to transform the profession. The report’s sponsors, the Robert Wood Johnson Foundation and the American Association of Retired Persons, established the ongoing Campaign for Action, an initiative to mobilize coalitions in all 50 states, including North Carolina, so nurses can more effectively confront health challenges.

By 2024, there will be over a million vacancies for registered nurses.

The Nursing Now campaign joins the Campaign for Action in advocating for nurses to be able to use their knowledge and skills to the fullest, be leaders and decision makers, advise on policy that concerns them, and bring advanced practice to the places it is most needed. You can pledge your support to the campaign here: www.nursingnow.org/join-the-campaign.

We need a flexible workforce that is competent and able to work to the top of its various licenses.

Nurses are ready for this. In fact, nurses have been ready for years. And our time is now.