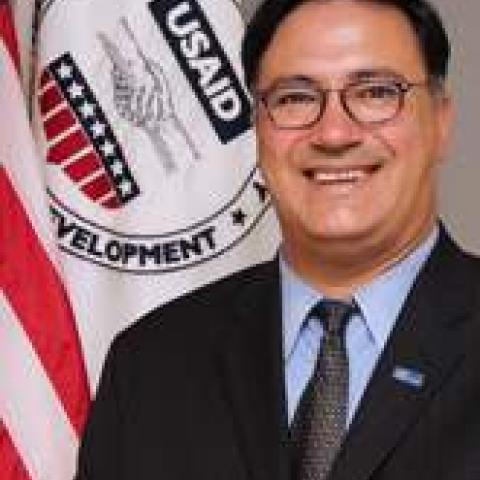 This post was originally published on USAID's IMPACT blog.

What if you could take a fraction of a penny and use it to help build a health system? Believe it. It takes only a fraction of a single penny per American taxpayer dollar to train a global health workforce—a workforce that will reach millions through treatment, prevention and counseling services.

Last year, Uganda’s Ministry of Health, operating with only one doctor and 13 nurses to serve every 10,000 people, was told by the Ministry of Public Service that not only could it not create any new positions, but also any unfilled positions—some 42 percent of them—would be lost.

Yet Thursday, Ugandan Vice President Edward Ssekandi, on behalf of President Yoweri Museveni, celebrated and honored the work of Teddy and other health workers at the “Celebrating Health Workers in Uganda” event. Other awardees honored for their inspiring work included Prof. Francis Omaswa, Dr. Yasur Mubarak and Dennis Tabula.

In addition to highlighting the contributions of individual health workers who have worked tirelessly to save the lives of their country’s most vulnerable and strengthen the overall health system, the event marked a new $19.8 million investment by the Ugandan government to fill critical health workforce positions throughout the country—a true show of in-country leadership and ownership. Just how the Ugandan Parliament approved such a significant amount of money from its limited budget exemplifies why the United States invests in global health.

Furthering the bipartisan legacy of American leadership in global health has helped slash child mortality around the world by 70 percent over the last 50 years, end smallpox, and put polio on the brink of eradication, President Obama and members of Congress from both parties have laid out a bold, yet achievable, vision to put an end to preventable child and maternal deaths, and create an AIDS-free generation.

The United States Agency for International Development (USAID) and its non-profit partners, like IntraHealth International, recognize that a major barrier to realizing this vision is a severe lack of trained and supported health workers, especially those on the frontlines of care. The World Health Organization estimates that 1 billion people have little or no access to essential health services, and that at least 1 million more frontline health workers are needed to deliver these services in developing countries. Global supply of antiretroviral drugs or vaccines cannot suffice without the health workers to deliver them to those in need – they are the backbone of any health system.

Such a crisis cannot be solved by the United States alone. We must work closely with our developing country partners to help them develop sustainable solutions that work in their own local context. This is why we are truly heartened by the commitment of the Government of Uganda to solving its health workforce crisis.

IntraHealth’s Uganda Capacity Program, supported by USAID, works with the Ugandan Ministry of Health on health worker staff audits for three years. The program keeps tabs on how many health workers are employed throughout the country, where they are, how many positions are vacant, and other key data that many developing country governments lack.

So when the Uganda’s planning ministry proposed the hiring freeze for the health sector, Uganda’s Ministry of Health and supporters of health workers across the country literally had the data at their fingertips to illustrate just how disastrous the freeze would be to the country, which has one of the highest maternal mortality rates globally, and the tenth highest HIV/AIDS prevalence rate in the world, according to UNAIDS.

Ugandans pushed their agenda forward using the power of evidence, which led to a budget passed in September 2012 that set aside almost $20 million to increase financial incentives for doctors who serve rural areas and created more than 6,000 jobs for new health workers who will improve the health and wellbeing of hundreds of thousands of Ugandans.

The Ministry of Health and the Uganda Capacity Program are now working on a sustainable, data-driven allocation plan for these in-country investments in health workers. Meanwhile, USAID and IntraHealth are working together through mechanisms such as the Frontline Health Workers Coalition to amplify our collective belief that trained and supported health workers are crucial to giving millions access to health care, and in turn, creating a healthier, safer, and more prosperous world.