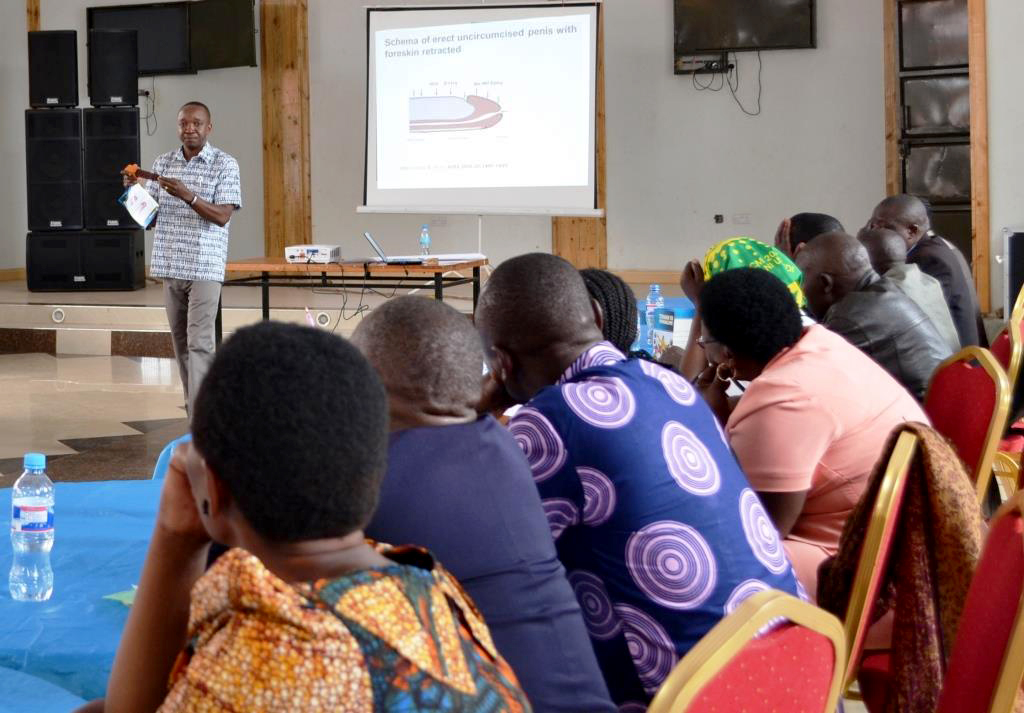 Since 2011, IntraHealth International has reached more than 960,000 boys and men in Tanzania with VMMC.

“A circumcised male is expected to be very brave and not display any sign of fear,” says Moses Matiko. “During traditional circumcision, he is expected to stay still and not show he is experiencing pain. There are selected community members who watch to see that he observes the rules.”

Moses grew up in Tarime District in Mara, a region in northeast Tanzania, and is part of the Kurya society. For Kurya clans, traditional circumcision like Moses describes—usually with no painkillers and performed in large groups—is an important cultural practice that marks the transition from being a boy to becoming a man.

Traditional circumcision, common in some parts of Tanzania, can also be dangerous for several reasons—including complications such as bleeding and risk of HIV infection if cutting instruments are used on more than one boy or man.

Moses’s parents, however opted for medical circumcision, which involves sterile instruments, local anesthesia, and pain killers. It was a rare decision at the time—and had its costs.

“I was termed as a weak and useless person by my peers just because my parents took me for medical circumcision,” Moses says. “Our family was penalized; we had to give livestock as a fine to the elders of the clan for them to grant me a rite of passage known as mkalamu, a Kurya meaning ‘a brave man.’ Uncircumcised men in some clans may not even be allowed to attend funerals or even if a man dies and he is not circumcised, he will be circumcised before he is buried.”

Moses is the chairman of the District Council in Mara’s Tarime District. My colleagues and I met with Moses and other local traditional leaders last month to discuss initiating voluntary medical male circumcision (VMMC for short) in the region.

IntraHealth International is collaborating with the Ministry of Health Community Development Gender Elderly and Children (MoHCDEGC), Mara Region Health Management team, and Tarime District Council Management Team as part of our ToharaPlus project to provide high-quality and safe VMMC services to males ten years of age and older, prioritizing males 15 – 29 years old for the greatest impact on reducing the spread of HIV.

VMMC reduces the risk of men acquiring HIV through heterosexual intercourse by about 60%.

About 1.4 million Tanzanians are living with HIV, or 4.7% of adults. Given the effectiveness of male circumcision against heterosexual acquisition of HIV, the government is scaling up VMMC as a critical HIV prevention strategy in the country.

IntraHealth has been implementing VMMC programs in nearby Mwanza, Geita, Shinyanga, and Simiyu regions of Lake Zone. Since 2011, IntraHealth has reached more than 960,000 boys and men with VMMC services in Tanzania.

To introduce VMMC in Mara, our team engaged local government councilors, traditional leaders, and heads of clans in formal discussion sessions to determine the strategies for offering VMMC services in Mara’s Tarime and Musoma Districts, with the aim of sharing ownership with the local community and increasing the acceptability and use of services. These initial meetings are paramount to the success of any VMMC program.

At the meetings in Tarime where we met Moses, we learned the Kurya society traditionally practices mass circumcision biannually in even years. We also learned mass circumcision involves using a single knife to cut more than one person without sterilizing it, which, contrary to VMMC, can spread HIV if even one person is infected.

We communicated the importance of ensuring safety by using gloves and sterilized blades during male circumcision and explained how VMMC reduces the chances of contracting HIV and other sexually transmitted infections. Clan leaders raised the need to advocate for change in their respective communities to adopt VMMC as a strategy to fight new HIV infections. They welcomed IntraHealth and suggested offering VMMC at nearby health facilities.

The clan leaders also insisted that our VMMC outreach campaigns align with the traditional circumcision season, which will next occur in June and December 2018. They were reluctant to allow ongoing VMMC outreach services, because they are likely to attract adolescent boys and might interrupt their school attendance during the healing period. In June and December, however, students will be on mid and annual leave and there will be no interference.

“December is specifically chosen because it’s both a holiday and harvesting season with enough food for the circumcision celebrations,” says James Wanjari, he secretary of the Joint Committee of the 12 Clans in Tarime.

James even pledged to provide supplies such as gloves and surgical blades to ensure safe circumcision. “We will provide you with all necessary support in setting up medical circumcision sites in our localities. Please provide us with enough educational materials to share with our people starting from now so that they can slowly start to understand the importance of safe medical male circumcision,” he says.

IntraHealth will continue to engage clan leaders and local government leaders throughout the implementation process to work with their communities to adopt VMMC. Our goal is to reach more than 31,000 men in Musoma and Tarime Districts this year and help Tanzania get even closer to its goal of an AIDS-free generation.

As for whether clan leaders will allow VMMC to count as a rite of passage toward manhood? It depends. The majority of clan leaders expressed their willingness to allow VMMC in their clans.  A few traditional leaders were reluctant and still plan to collect fines.

The work above is part of IntraHealth International’s ToharaPlus project funded by the US President’s Emergency Plan for AIDS Relief Fund through the US Centers for Diseases Control and Prevention.