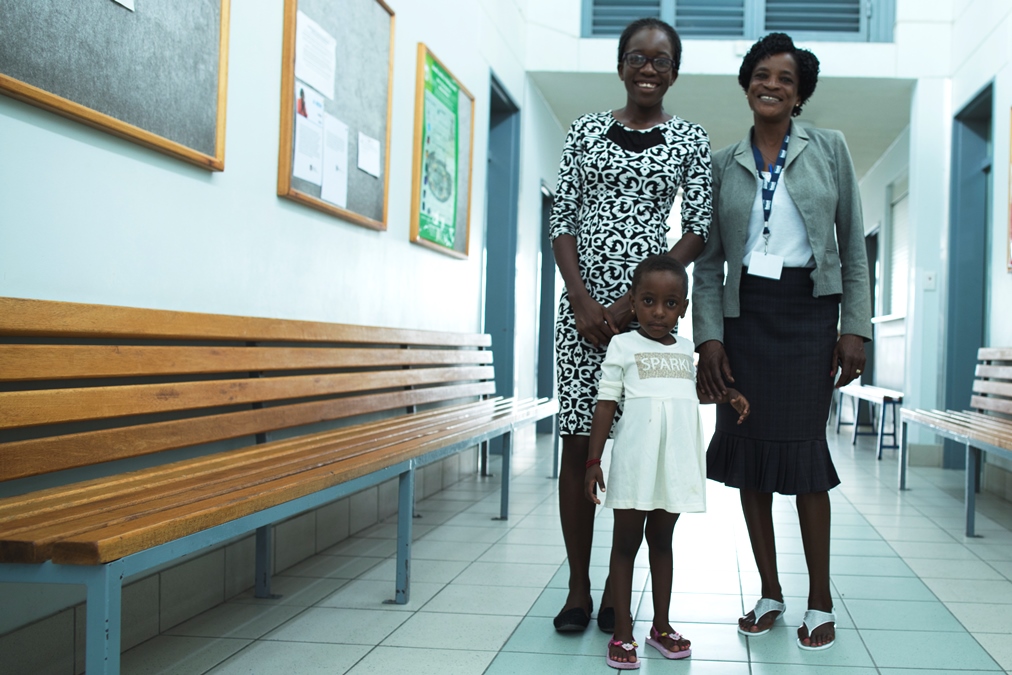 Loide Iikuyu, right, with her daughters Loide (left) and Selma. When the younger Loide was 10 years old, her mother explained to her how and why she came to be HIV-positive. “I told her it was because of mother-to-child transmission,” the elder Loide says, “and that it was not her fault.” Photo by Morgana Wingard for IntraHealth International.

A community health worker’s two daughters both share their mother’s air of calm, but only one shares her HIV status.

“I talk with them so peacefully,” she says. “You must talk, slowly by slowly, to find out what are the reasons they are defaulting on their medications.”

Part of Loide’s job is to seek out clients who, according to Onandjokwe Hospital’s records, have stopped coming in to collect their HIV meds. And she has to convince them—in her naturally quiet, gentle voice—to start back up, both to stay healthy and to avoid transmitting the virus to others. And she has to do it without chastising them, or making them feel worse than they often already do.

She didn’t know that her husband had contracted HIV, or that he had transmitted the virus to her.

Sometimes Loide finds the reason someone has stopped coming in is because they can’t find transportation from their homes to the faraway hospital. Others have died. And some have stopped because taking their antiretroviral drugs on an empty stomach makes them feel sick—this reason has come up a lot this year, she says, as a terrible drought has devastated crops in the north, where HIV rates are particularly high, reaching 22.6% in Onandjokwe district. 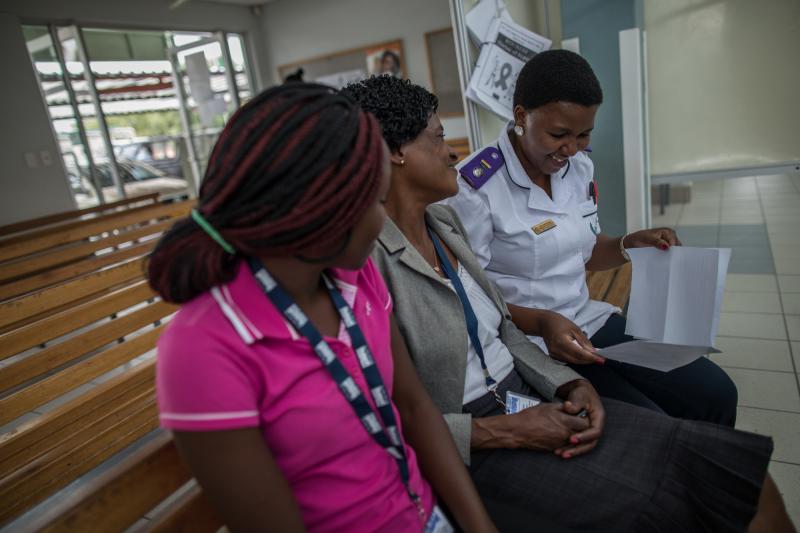 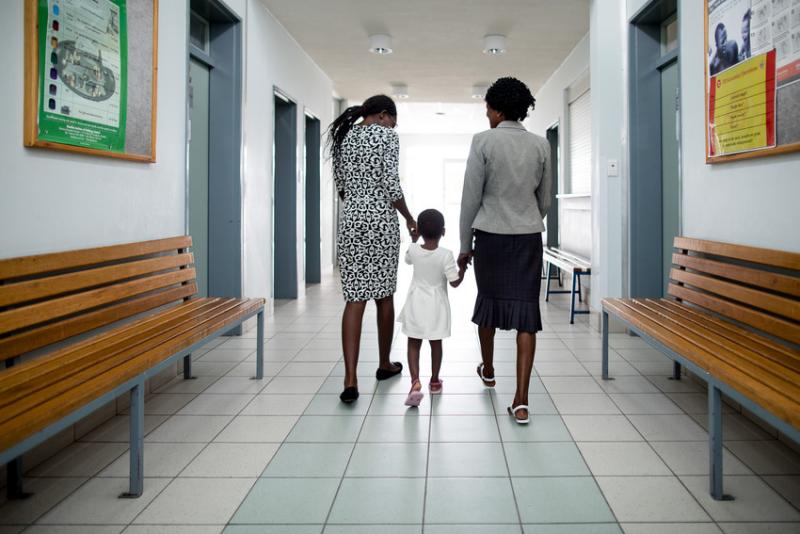 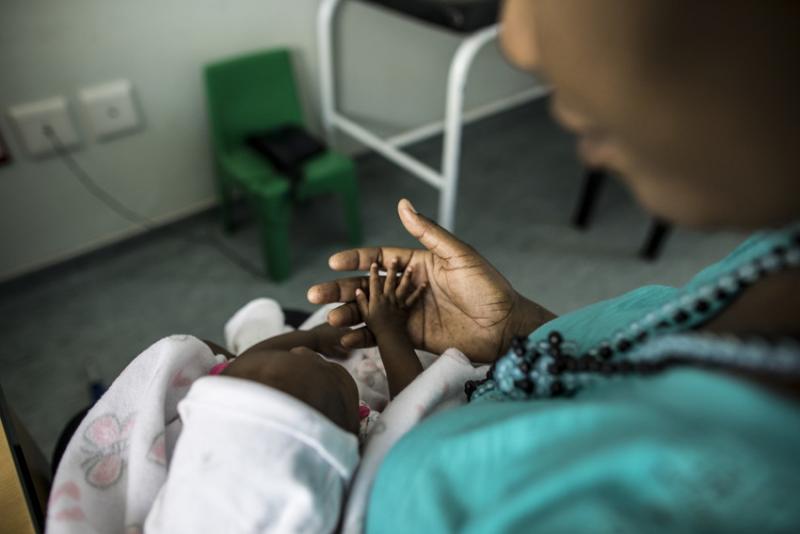 Loide sits with her two daughters at Onandjokwe Hospital as she tells us about her work. One of the girls is 18, and also named Loide. The other—little Selma—is 4. Both share their mother’s air of calm and her quiet voice. But only Loide shares her mother’s HIV-positive status.

The elder Loide became a regular at Onandjokwe Hospital long before her paid job as a community health worker began two months ago. Before that, she was a volunteer, and before that, a patient.

Back in 1998, when Loide gave birth to her namesake, she didn’t know that her husband had contracted HIV, or that he had transmitted the virus to her, or that she had unknowingly transmitted it to her newborn daughter. It was years before the World Health Organization offered guidelines for what’s now known as PMTCT, the steps that can prevent mother-to-child HIV transmission.

“I didn’t have the information to prevent it,” Loide says today.

Her husband died shortly after baby Loide was born. “He never went for testing because he didn’t want to know his HIV status,” the elder Loide says. “He was scared to know.”

The year Selma was born was a tough one at Onandjokwe.

But once she learned that both she and her daughter were HIV-positive, Loide began seeking care and taking HIV medication regularly. And when Selma was born in 2012, she was born HIV-negative, thanks to PMTCT services at Shanamutango, the HIV clinic at Onandjokwe Hospital.

Today, all three are healthy and smiling.

The year Selma was born was a tough one at Onandjokwe. A staff shortage had left Shanamutango clinic with just one doctor and five nurses to care for over 10,000 clients per month. That’s when IntraHealth International, supported by USAID through PEPFAR, set to work helping the team at Shanamutango redistribute tasks through task sharing, revamp their internal processes, and set up satellite facilities in the surrounding areas to prevent new infections and make HIV care more widely available to the local communities.

The results are shorter wait times, happier health workers, and better-quality care for clients like Loide.

Today Loide counsels clients with the same kindness and insight Meme Nandina—the health worker who first cared for her at Shanamutango many years ago—showed her, and encourages her clients to come for PMTCT services when they need them. New improvements and additional staff at the hospital make this easier than ever for clients, and allow Onandjokwe to offer the kind of outreach Loide conducts.

When the younger Loide was 10 years old, her mother explained to her how and why she came to be HIV-positive. “I told her it was because of mother-to-child transmission,” the elder Loide says, “and that it was not her fault.”

“She told me to focus on my books and be like other kids who are not positive,” the younger Loide says. “She encouraged me, and said ‘Don’t be afraid.’ To other children who live with HIV, I just want to say you must not be afraid of being HIV-positive, or of being bullied at school. You must have courage.”

Loide watches the delicate work her mother does every day, and sees the people she helps. Someday, young Loide says, she’d like to become a nurse so she can help people, too. She nods and says quietly, “I would very much like that.”

IntraHealth is working with the government of Namibia to increase the number of health workers providing HIV services and provide the support and training they need to reach the country’s goal of an AIDS-free generation. IntraHealth’s USAID HIV Clinical Services Technical Assistance Project in Namibia is funded by the US Agency for International Development through the President’s Emergency Plan for AIDS Response (PEPFAR). Read more about IntraHealth’s work in Namibia.

Valery Mwashekele and Cherizaan Willemse contributed reporting to this story.