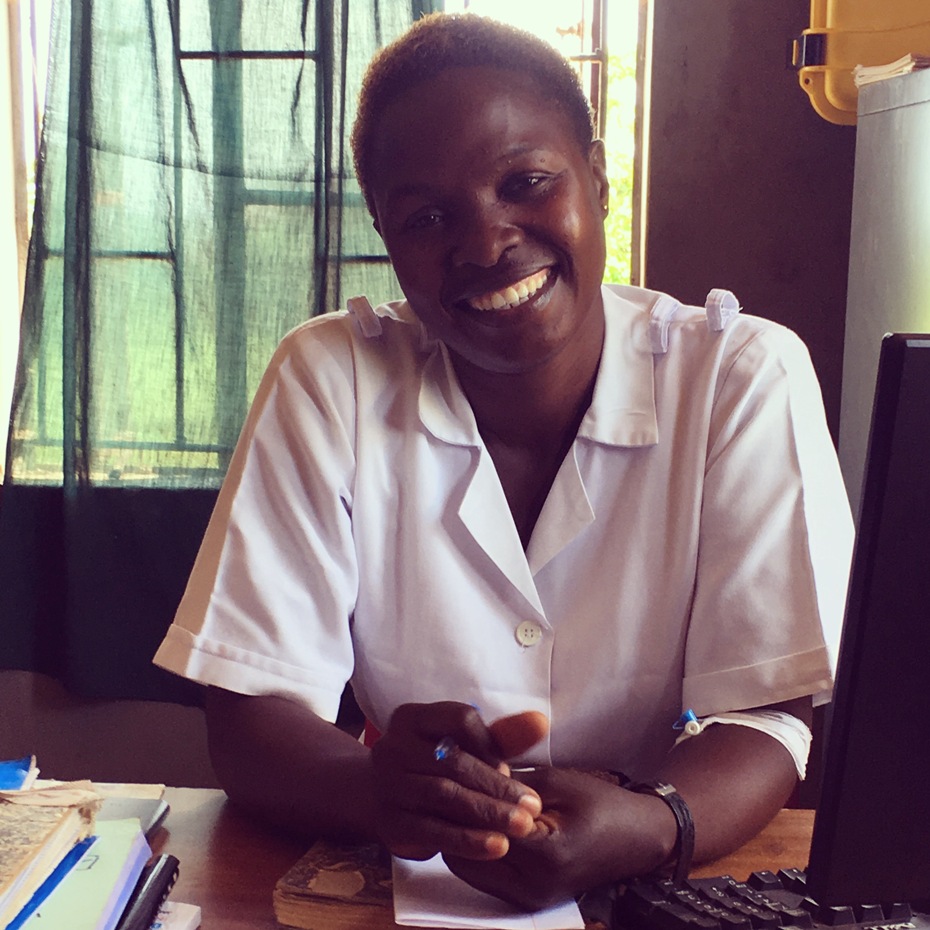 Nangobi Victoria is a nursing officer and the assistant in-charge at Busowobi Health Centre III in Iganga District, Uganda. Photo by Lena Muldavin for IntraHealth International.

Victoria treats a lot of malaria cases. Today, she's both nurse and patient.

As a young girl in primary school, Nangobi Victoria admired the smart uniforms the nurses in her community wore. She could see herself in one.

As she completed her secondary education, Victoria began to consider nursing as a career. She liked the idea of delivering health services, of helping people in her community get well. So she enrolled in nursing school. She started as an enrolled nurse and later upgraded her training to become a nursing officer.

Now she’s the assistant in-charge at Busowobi Health Centre III, which serves a subcounty of about 20,000 people in Iganga District, Uganda. She says about 70 clients come to the health center on an average day, 80 if it’s busy. Victoria lives a bumpy boda boda (or motorcycle taxi) ride away, about five kilometers down the road in Iganga town. When she comes to work in the morning, the first thing she does is greet all her clients, and then she begins health education and treatment.

Uganda’s Ministry of Health reports that malaria is the leading cause of death in the country, accounting for over 27% of deaths. And the prevalence of malaria in children in Victoria’s region is 53%—far above the national average of 30%.

Malaria is the leading cause of death in Uganda, accounting for over 27% of deaths.

One of the risk factors for malaria is poverty. More than half of children (52%) in the lowest wealth quintile in the country have malaria—compared to just 5% of those in the highest quintile—according to Uganda’s 2016 Demographic and Health Survey. Sleeping without an insecticide-treated mosquito net, geographic location, lack of access to health care, and lack of awareness of malaria symptoms also put Ugandans at risk.

Uganda has the sixth-highest malaria-related mortality rate among African countries. Infants, young children, pregnant women, and HIV-positive people are among the groups most likely to contract and suffer most acutely from malaria. With prompt diagnosis, most cases can be treated effectively with artemisinin-based combination therapies (ACTs). Health workers like Victoria are essential to preventing and treating the disease.

But today, Victoria is her own malaria patient.

As she talks with us today, she answers our questions patiently. She’s soft spoken, but her eyes are animated. Her calm and friendly demeanor suggests someone who is not easily ruffled, someone you’d want by your side in case of an emergency or illness. It’s not until a member of our group notices and asks about the IV port in her arm that I learn she came to work despite not feeling well. She tested positive for malaria and is on treatment.

In addition to malaria, Victoria says that malnutrition, diarrhea, respiratory infections, and HIV are common conditions they treat at Busowobi. There are also lots of maternity clients that day at the health center, which is equipped to handle uncomplicated deliveries.

Busowobi has 13 health workers (one clinical officer, one nursing officer, four nurses, two midwives, two laboratory assistants, two medical records assistants, and a cleaner). According to the country’s staffing norms, a fully staffed health center at this level should have 19. She tells us that on any given day there are about 9 people on duty, but today the team is even smaller. One nurse is home with a sick child and the clinical officer—the in-charge—is away for the morning at a training workshop.

Absences can take a toll on the health workers left to manage a busy waiting room crowded with women and young children. Some absences, like those today, can’t be avoided, though until recently, unexcused absenteeism had also been a problem with a couple of staff members. But since the district started monitoring and managing absenteeism with tracking tools and a system of rewards and sanctions—part of a package of health workforce interventions offered by IntraHealth International’s USAID Strengthening Human Resources for Health activity—the  health center has reduced unexcused absenteeism from 22% in July 2016 to 2% in February 2017.

Seven years ago, the facility had only eight staff members. With a growing staff have come additional services and increased demand. For instance, the facility used to report about three to five deliveries a month; now it averages 15.

It’s a lot of work for the small team. All of their schedules are full to the brim.

When we ask if she’s happy that the numbers of clients have gone up, though, Victoria nods and smiles warmly.

Through its USAID Human Resources for Health Strengthening activity, IntraHealth International has been working with district health officials in Iganga District for the past two years to implement a package of health workforce interventions, including performance management guidelines and tools and a system for tracking and managing absenteeism.