Looking at Voluntary Medical Male Circumcision in the Field 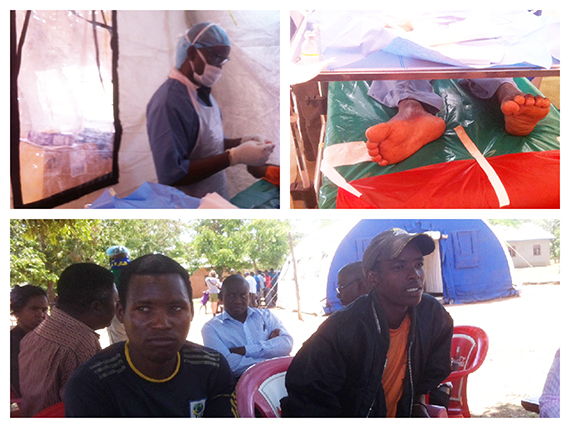 A slight young man who looked far younger than his mere 24 years, Kakere, who is married and lives in Mhango village in Tanzania's Shinyanga region, opted to undergo the procedure after seeing a large VMMC mobile field clinic near his village.

The clinic, housed in a large, deployable tent and powered by a massive generator, with a waiting area and operating tables inside, was erected and run by IntraHealth International-trained health workers. The mobile clinic reaches 25,000 local men and young boys over the age of 10 from three villages who want to undergo VMMC but do not have access to nearby health facilities.

"I was passing nearby and heard there was a tent and asked what was being done," Kakere said through translation. "I was anxious to get the service."Voluntary medical male circumcision is a common, 15- to 20-minute procedure that reduces HIV acquisition by 60 percent during heterosexual sex. VMMC is considered to be one of the easiest and most effective methods to reduce HIV transmission.

When I asked him how he felt about the procedure, Constantine gave a thumbs-up and simply said, "Poa," which means "cool" in Swahili.

It's been found, surprisingly, that women in sub-Saharan Africa tend to be excellent targets of VMMC messaging, as they encourage their partners to get circumcised and they understand that while not foolproof, a circumcised partner poses a lesser HIV threat than one who isn't.

Village announcement campaigns also educate and bring in potential VMMC clients. Constantine Michael, 10, heard the announcement in his village and asked his older sister, Rosalea Michael, 19, to take him to IntraHealth's mobile clinic.

"I heard from the announcement in the village," Constantine said in a low, shy voice. "I asked my sister to bring me."Rosalea agreed to take Constantine to get the procedure, but only after explaining VMMC to him. When I met them, Constantine was waiting in line with other young boys to get tested for HIV and be counseled afterward before undergoing the procedure.

When I asked him how he felt about getting the procedure done, Constantine gave a thumbs-up and simply said, "Poa," which means "cool" in Swahili.

IntraHealth, a global NGO that works in 90 countries and trains health workers to serve public health, works in Shinyanga, Simiyu, and Mara regions in northeast Tanzania to help the Ministry of Health reach the voluntary male circumcision targets set in 2009.

The expectation is to successfully perform 200,098 voluntary male circumcision procedures by 2017 in these regions

Armed with CDC funding, IntraHealth works to effectively reduce the 7.4-percent HIV-prevalence rate in the three regions in which they work on VMMC. The HIV rate in these areas is higher than the nationwide average, making the scale-up and outreach of VMMC critical.

The Tanzanian government takes part in the human-resource side of regional VMMC projects and also pays health workers, explained Dr. Gissenge Liga, the head of the Clinical STI Unit and a national VMMC focal person. Yet there are still challenges that health workers who work on VMMC face.Dr. Ntuli Kapologwe, a regional medical officer in Shinyanga, says the main challenges are supply-chain management, governance, continuing education, and low pay for health workers. "On the regional level people are competent," Kapologwe said. "We are doing our best."

Paying nothing for his circumcision because voluntary medical male circumcision is an HIV-prevention procedure, Amos Kakere underwent the relatively quick procedure inside the air-conditioned field clinic. Aside from the initial pain of the anesthesia shot, Kakere lay still on the operating table during the relatively painless procedure. He was given painkillers, instructed to return after three days for follow-up, and told to abstain from sex for six weeks in order for the circumcision to fully heal.

Voluntary medical male circumcision has made definite inroads in Tanzania through years of initial pilot projects, awareness and education campaigns, and a scale-up of VMMC services provided in health facilities and in mobile units. The approach seems to be working.

Before undergoing the procedure Kakere said, "I will encourage my friends. They shouldn't be scared."

Disclosure: I traveled to Tanzania as a guest of PSI to see their lifesaving work on the ground with health workers, as well as to see IntraHealth's VMMC mobile clinic in Shinyanga region. 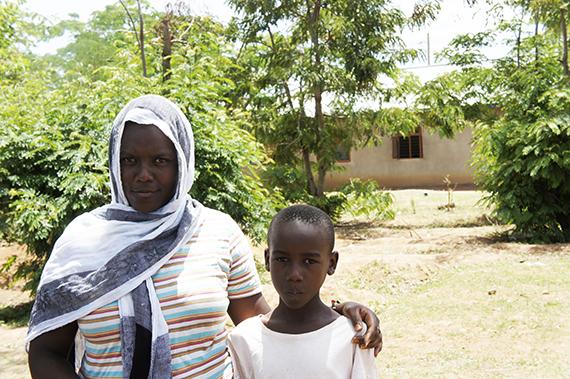 Constantine Michael, 10, heard the announcement in his village and asked his older sister, Rosalea Michael, 19, to take him to Intrahealth's mobile clinic. Photo courtesy of Jennifer James.