From Hackers to Health Care: 5 Favorite Moments from Day 1 of SwitchPoint 2014 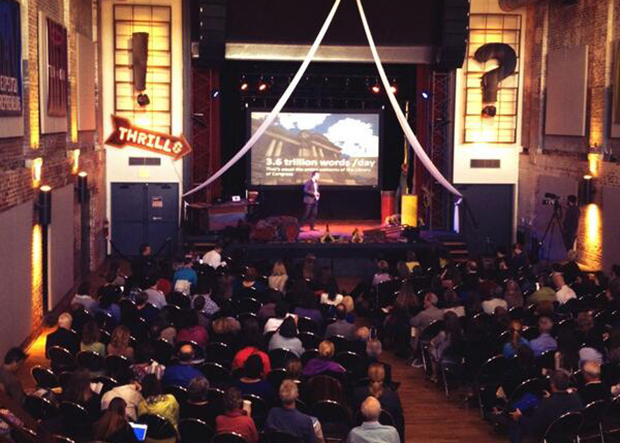 We covered a lot of ground for global good at SwitchPoint today. We talked about city simulation games and virtual dissection tables. About hackers and NSA cell phone monitoring. About health care in Syria and the Central African Republic. About music, puppets, poetry, and more. Today at SwitchPoint we heard just some of the ways technology is changing our global societies, our ways of thinking, and our health and well-being.

In case you couldn’t join us, here are 5 highlights from today:

Smarter than You Think

Half an hour before Clive Thompson was to go on stage at SXSW, he realized he didn’t know how to pronounce the author's name that was to come up during his presentation: Goethe. So he reached out to his network of over 20,000 followers on Twitter. He had his answer (along with a good ribbing) within minutes.

As a global community, we write and post some 3.6 trillion words to the internet every day, Thompson said—that’s roughly equal to the contents of the entire Library of Congress. So how does this massive amount of public expression change the way we think? Technology—and the worldwide audience it offers to us all—is pushing us to be smarter and more creative in the ways we share and express our ideas, Thompson said. It’s also offering us a way to expand our knowledge through the combined expertise of internet users everywhere. (By the way, he said, it’s pronounced GER-ter.)

A native of Newtown, Connecticut, and a longtime resident of Boston, John Crowley knows a thing or two about resilient communities. But what determines a community’s ability to recover from a disaster? And how can we help at-risk communities to prepare for the potential devastation of earthquakes, volcanic eruptions, or terrorist attacks?The answer, Crowley said, is better data. Accurate, data-rich mapping, for example, can lay the foundation for a collective memory of how things are in a community, how they may be vulnerable, and how they could be rebuilt if disaster strikes. Crowley works with the World Bank Group's Global Facility for Disaster Reduction and Recovery. “If we’re going to work with at-risk communities,” he says, “we need to work with them to curate data, rather than doing it for them.”

Some say that social media—and the crowd-sourced, real-time, on-the-ground reportage it makes possible—eliminates the need for traveling professional journalists or for country offices that can report on local crises and conflicts. Based on his experiences in reporting the Arab Spring, Andy Carvin said, that’s simply not true.

“The reporting power of people online can come together with that of those on the ground to tell the real story,” he said. “They don’t conflict with each other—they complement each other.”

“Syria is the worst human rights crisis of this century, of this generation,” Dr. Zaher Sahloul said. “This is probably the worst disaster you’ll witness in your lifetime.” During times of conflict and upheaval, medical care is almost always compromised. Doctors are kidnapped, health workers incarcerated by one side for providing care to the other. Death and disease slowly take hold. In Syria, for example, there have been 38 new cases of polio since the crisis began, despite the fact that polio was eradicated in that country in 1999. And after civil war broke out in Central African Republic last year, only about 20% of health workers are now reporting to work. That’s why Safeguarding Health in Conflict, a coalition of 25 organizations, is committed to addressing the problem, including at the roots. “Let’s look beyond crisis,” Laura Hoemeke said. “Let’s look at what leads to crisis.”

“What is technology?” Josh Nesbit asked. It’s one simple question with a lot of different answers. Many things that may be called technological advances when they first appear eventually become a fundamental part of life—inescapable rather than innovative. Take chairs, for instance, he said. They’re ubiquitous now, but they were groundbreaking in their day.

The same could be said for mobile phone technology. “We’re freaking out about cell phone coverage right now because it’s new,” Nesbit said. “But soon it will become ubiquitous.” And when it does, companies such as Medic Mobile will be ready for it.