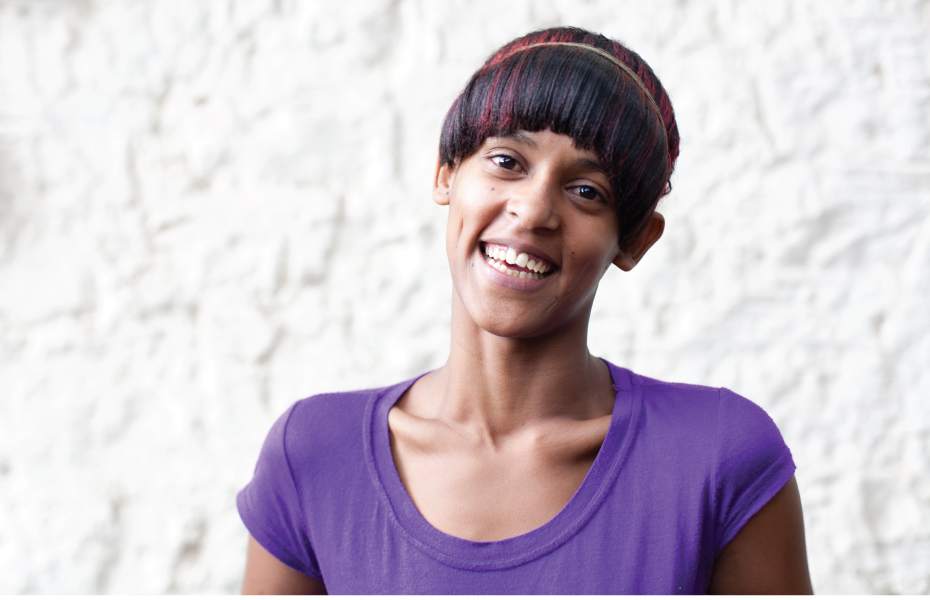 When I first met 21-year-old Gelila in Addis Ababa, Ethiopia, this past June, she seemed shy. But she stuck by my side, and asked me a lot of questions about my life in the US and work in public health. She also told me about her life.

“When I get older, I want to make a difference,” she said. “I have plans. But first—I would really like to be a beat maker.”

Gelila is a university student—and an aspiring musician. She also is the star of a new video series. Gelila was one of twenty young Ethiopians who participated in a two-week Beat Making Lab workshop last June.

A Beat Making Lab is an electronic music studio that fits in a backpack. Its founders, Pierce Freelon and Stephen Levitin (aka Apple Juice Kid), work with local community centers to teach young people around the world how to blend music—both traditional and hip-hop.

Next week during the International Conference on Family Planning in Addis Ababa, Gelila will be the star of a special session on beat-making and family planning. We hope to help young people make informed decisions about their sexual health. And about their futures.

Some of the 1,500 conference participants will have an opportunity to make beats. I can’t wait to see Gelila and her friends. I know that she is surprised to be the “star” of a new Beat Making Lab video series, and she might feel shy about performing on stage. But once she starts singing, she will have as much fun as we will listening to her.

IntraHealth joined forces with the Beat Making Lab team in the spring of 2012, after Freelon and Levitin performed together at our annual SwitchPoint gathering. At SwitchPoint, they talked to Casey Caplowe, co-founder of GOOD, about their upcoming trip to Goma, in the Democratic Republic of the Congo. Caplowe then introduced them to PBS Digital Studios, which partnered with the team to put into motion what Freelon and Levitin call their “SwitchPoint year.”

As the Wall Street Journal’s Speakeasy blog noted, when Freelon and Levitin started a course on beat-making at the University of North Carolina in Chapel Hill in 2012, they had envisioned community outreach. They had not, however, even dreamed of setting up community programs in Africa, Central America, and the South Pacific. Now with backpacks full of recording equipment, they have taught beat-making to youth not only in the Democratic Republic of the Congo, but also in Panama, Fiji, Senegal—and Ethiopia.

We decided to team up with Freelon and Levitin, realizing that the beat-making experience can be transformational in empowering young people. This past summer, IntraHealth sponsored the Beat Making Lab in Addis Ababa. During the two-week training, a group of twenty 18-to-25-year-olds learned how to compose original beats based on a fusion of traditional rhythms and modern techniques. The students then learned to use software to transform the beats into their own unique compositions—personalized soundtracks of their unique concerns, hopes, stories, and plans.

Stories from the Beat Making Lab experience in Ethiopia were captured in a six-part video series, which is being rolled out in weekly broadcasts on Public Radio International’s The World.

And the Beat Goes On…

So what does composing beats have to do with “family planning?” Or “future planning?” As I wrote back in September on World Contraception Day, maybe we’ve got it all wrong when we talk to young, unmarried, people about “family planning.”

The young Ethiopians I met back in June during the Beat Making Lab workshop were more excited about music and art than “contraception.” Several of them, in addition to Gelila, were university students and held jobs. All of them were thinking about their future selves, and how they could best contribute to the future of their communities and countries.

Maybe you can’t connect with young people by “talking shop” about implants and delaying pregnancy. Maybe we need to refocus our communications on what matters to them. For the participants in the Beat Making Lab, it was “future planning.” And it was fun.

“The artistic lens allows people to speak in a voice that they might not bring to a panel discussion or in response to a survey,” says Freelon. “Art is about improvisation, critical thinking, and most importantly—expression. We have found that nurturing these things leads to fruitful discussion and engagement around solutions.”

Merging the topics of music and sexual health gives participants an opportunity to think about “family planning” in an inspirational—not clinical—way. The process also creates the type of collaborative, creative environment where they can express ideas about sensitive topics through art. It gets young people talking about and reflecting on health issues without the lecture or tutorial.

The world needs solutions, and the young generation has ideas. We have the largest population of youth in history: more than three billion people under the age of 25 and more than 1 billion between the ages of 15 and 24. More than 80% percent of 15- to 25-year-olds live in developing countries. And, as I wrote in September, every year more than 14 million births occur among adolescent girls in these countries. Many of these births are not planned, and can have a major impact in diverting young people from their plans and dreams.

The decisions that young people make every day, including decisions about sex and reproductive health, have an impact on their own lives and the world.

I have the honor of being a facilitator for the youth delegates who have been selected from around the global to participate in the conference. One of the sessions I will be moderating is about goal setting and is designed to give youth participants an opportunity to develop a personal action plan for the conference—and beyond.

Many conferences come and go, without much follow-up on the part of those who participated. By spending some time to develop their own personal action plans, the youth delegates will focus on getting as much as they can from the conference sessions—and commit to taking the experience of the conference back home.

I bet their goals will relate to “future planning” as much as—or even more than—“family” planning.

“Future planning,” the special beat making session, will be held in the amphitheater of the African Union at 4 pm on Thursday, November 14. Freelon and Levitin also will perform during the opening plenary session of the ICFP on Tuesday, November 12.

Watch all six episodes of the Beat Making Lab in Ethiopia. 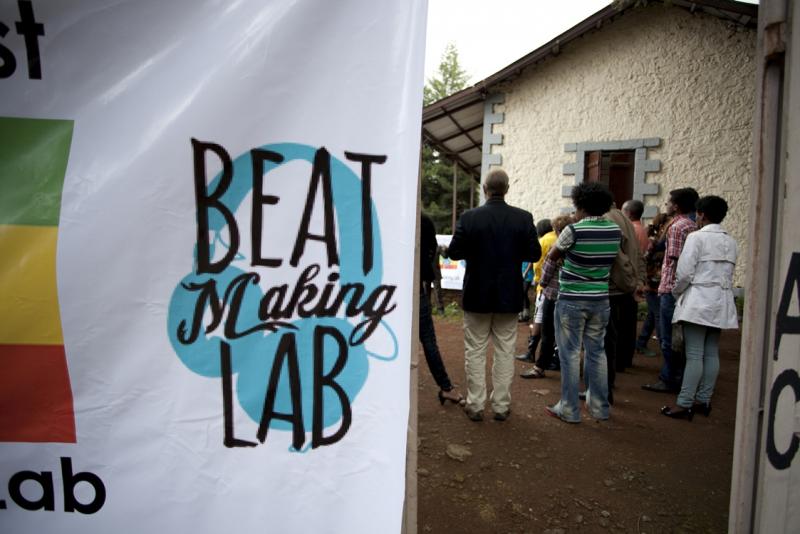 A Beat Making Lab is an electronic music studio that fits in a backpack. Its founders, Pierce Freelon and Stephen Levitin (aka Apple Juice Kid), work with local community centers to teach young people around the world how to blend musicâboth traditional and hip-hop. 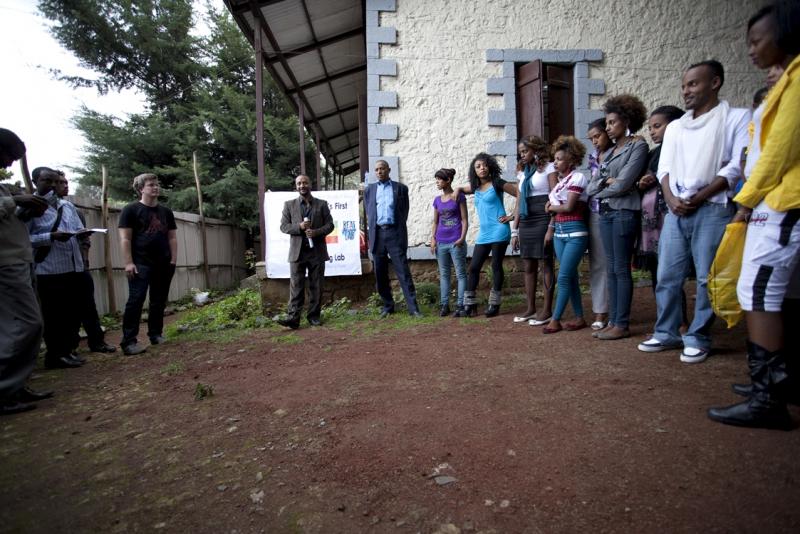 Beat Making Lab participants and IntraHealth staff gather outside of the Addis Ababa studio before getting started. 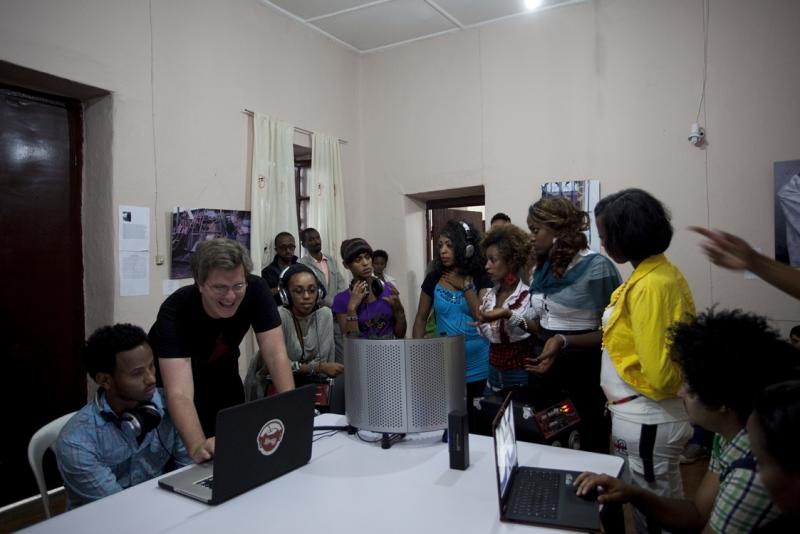 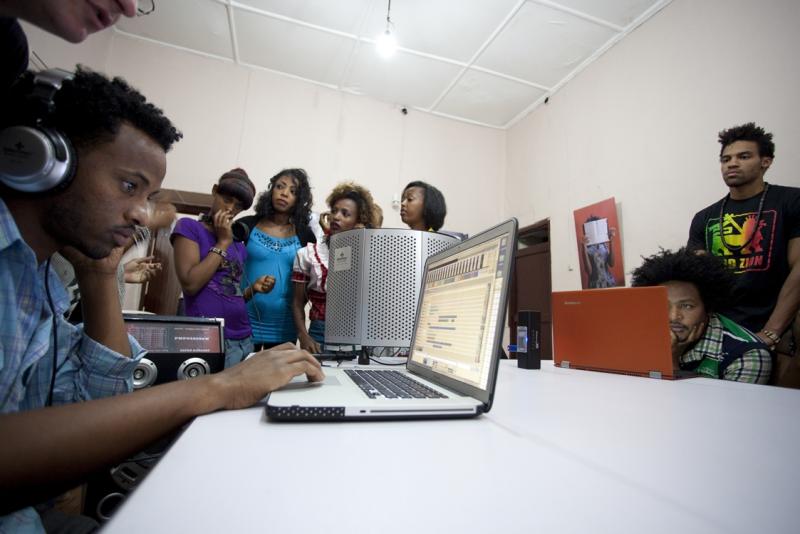 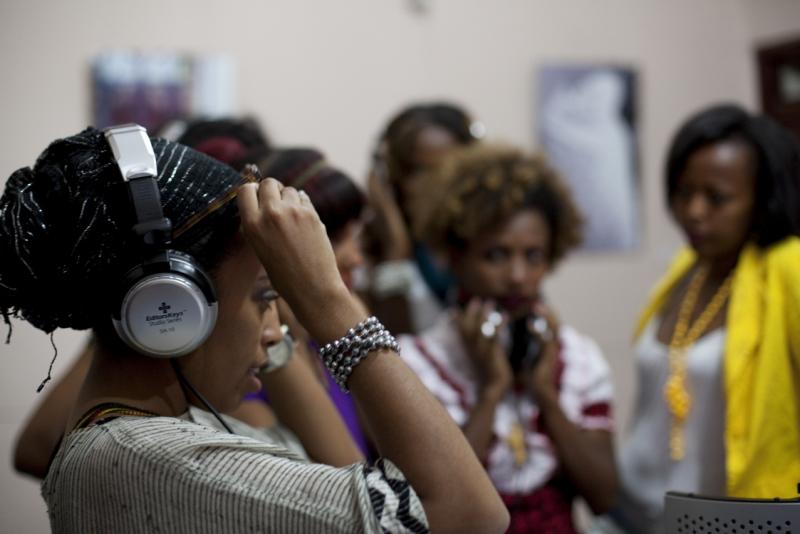 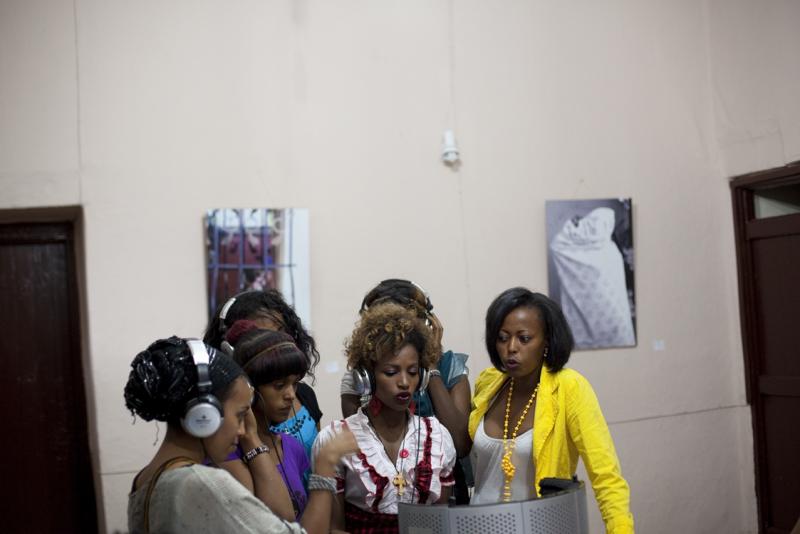 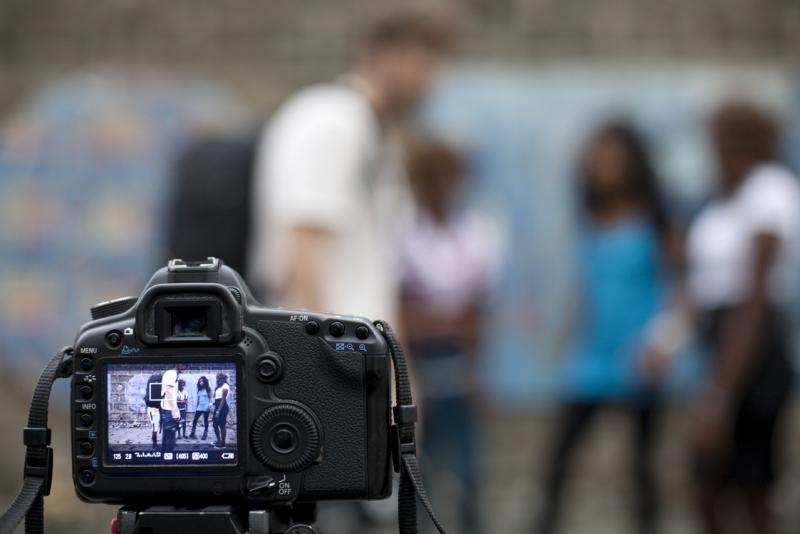 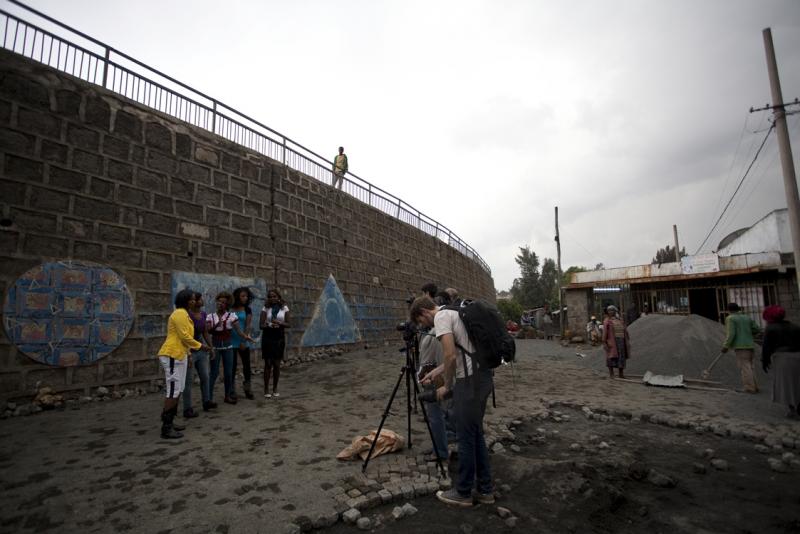 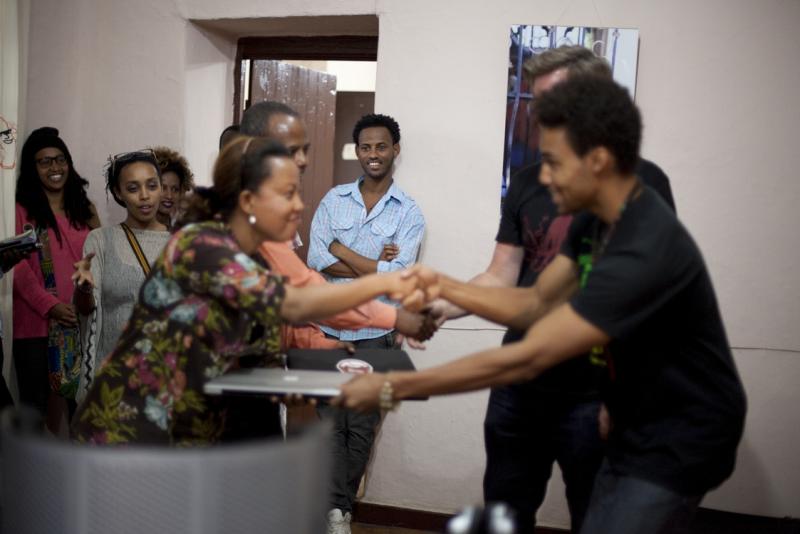 Pierce Freelon and Apple Juice Kid hand donated laptops and other beat making equipment to local partners at Save Our Generation and Music Mayday. 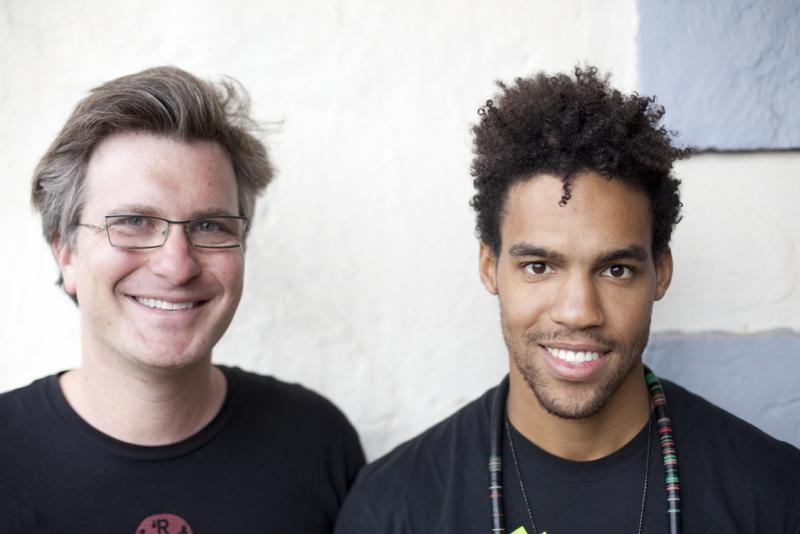