A Filmmaker and a Physician Walk into a Vasectomy 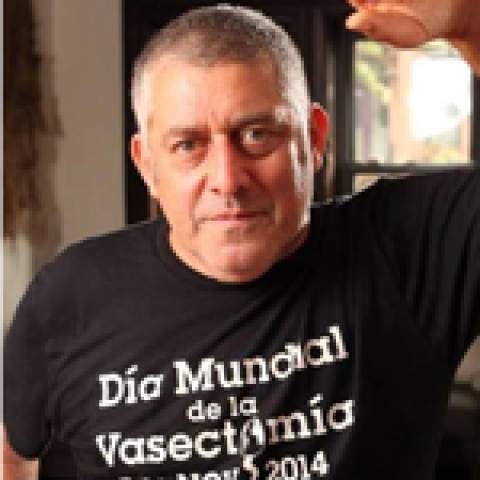 While making a personal film about my own complex journey through fatherhood, I met Dr. Doug Stein. His monthly trips throughout Florida to provide vasectomies, and his vasectomy missions to low-income countries inspired me to help launch a movement—and to become his 25,000th client.

I had made many films about angry and alienated men who, lacking positive ways to express their innate power and potential, inflicted brutality on society’s most vulnerable. In contrast, observing them on the day they made the conscious choice to exit the gene pool revealed a vulnerability and thoughtfulness I had rarely witnessed.

I realized there was something big I could do to get more men involved in family planning.

Filmmaking and fatherhood became my switch point. It's when I realized there was something big I could do to get more men involved in family planning.

To transform one man’s choice into a global movement, Doug and I created World Vasectomy Day—which is both an actual day and an advocacy organization—in 2011, and set out to inspire 100 doctors in 25 countries to do 1,000 vasectomies.

Doug insisted it happen on a Friday. Men like weekends to recover.

It wasn’t easy. Yes, there are places, such as New Zealand, where 20% of men choose vasectomies. But there are also countries where it’s less than 1%.

We saw compelling reasons to start this movement:

The Kiswahili language uses the same word for both vasectomy and castration.

One of the greatest challenges to this movement is the vasectomy’s image.

The Kiswahili language uses the same word for both vasectomy and castration, and this is what many men actually believe. And not just men. Many women would agree with my friend who suggested a vasectomy can change a man’s status from alpha male to alpha-lite. Fear and good information might get a man to wear a condom, but we needed more compelling stories and messages to spread the word about the benefits of vasectomy.

My first proposed World Vasectomy Day slogan, “Balls on the line for Mother Earth,” didn’t quite hit the mark. It emphasized the ecological importance of family planning. But population is a complex issue that requires an extremely nuanced conversation—also Doug pointed out that a vasectomy has nothing to do with your testicles. Not to mention it was embarrassing wearing the t-shirt in public. So we landed on “An act of love.”

Rhetoric aside, with all the problems we face, both as individuals and as a planet, it’s time for men to stand up and shoulder our share of the responsibility for family planning. Make no mistake: our children and our children’s future depend on it.

Get your tickets for SwitchPoint, April 21–22, today.

And frankly, what other movement do you know that celebrates doing right by your family, your partner, and your community, while actually improving the quality of your sex life? There’s nothing more pleasurable than worry-free sex. (But remember you do have to get your sperm retested after a few months and vasectomy does not protect you from STDs.)

While we don’t judge who should or shouldn’t get a vasectomy at World Vasectomy Day, we insist it must be voluntary. There are men in their twenties who don’t want children and men in their seventies who do. One young Iraq war veteran asked us, “Why, if I’m old enough to kill or die for my country, can’t I choose not to have children?” Doug suggested he consider freezing some sperm.

This is a decision each client must make with his doctor. Ultimately, vasectomies are permanent and should be considered only by men whose families are complete.

While a vasectomy is a far cry from castration, we acknowledge there are rare side effects. There is a very small chance that a vasectomy can cause long-lasting pain, and we certainly have great sympathy for these men. Some studies have suggested a possible link between prostate cancer and vasectomy, though many other studies suggest otherwise. Are there other unknown risks? Perhaps. But taking risks and making sacrifices is precisely what women historically have done during the one-third of their lives when they are of reproductive age.

Isn’t it time we took on some of it?

It’s time for men to stand up and shoulder our share of the responsibility for family planning.

For all the effort to inspire men, it wasn’t until we empowered the real champions—the urologists and vasectomists—that our movement took off. Providing vasectomies is not easy nor always accepted, but these health workers form the backbone of our event, and World Vasectomy Day exists to support their efforts.

Now in our third year, there are close to 750 skilled doctors from 40 countries participating in what is the largest male-oriented family planning event in history. We reveal the best of who we are when we are working together against all odds. And on World Vasectomy Day (which last year fell on November 13), each man, while making the right choice for himself and his family, also stands together to help create a more hopeful future. Meet Jonathan Stack and hear more about the efforts behind World Vasectomy Day at SwitchPoint, April 21 & 22 in Saxapahaw, North Carolina. SwitchPoint—an annual conference produced by IntraHealth International—is where humanitarian innovation, global health, and technology collide.