By Laura Hoemeke
Former Director of Health Policy & Systems
During last year’s International Conference on Family Planning, IntraHealth promoted health worker empowerment with the slogan “Family Planning: It Takes a Health Worker.” We had the phrase printed on posters and buttons, proudly displayed at our booth and on our lapels. We posited that all of the contraceptive technologies in the world will not make a difference if there are not skilled health workers to deliver them. Visitors to our booth, seeing our theme, sometimes laughed and said, “Well, technically it doesn’t take a health worker to put on a condom or promote abstinence.”

During the conference, I responded—and continue to assert—that it does take a health worker, or more accurately millions of health workers, to meet the need that hundreds of millions of couples worldwide have for family planning. It takes a health worker not only to administer most modern methods of contraception but also to provide counseling and services in a holistic way, and to offer reproductive and other health services throughout the life cycle of both women and men.

A new report issued by the Guttmacher Institute and UNFPA this week, Adding It Up: Costs and Benefits of Contraceptive Services—Estimates for 2012, supports that notion. Guttmacher and UNFPA released the report in preparation for next month’s Family Planning Summit to be held on July 11 in London with the support of the Government of the United Kingdom and the Bill & Melinda Gates Foundation. The summit aims to mobilize new partners and more resources to address family planning needs, especially in the developing world. Labor—or salaries of health workers—currently accounts for an estimated $0.7 billion of the $4 billion spent on family planning in developing countries in 2012, but we need to invest more, globally, to ensure that health workers are there to expand access and offer services. At IntraHealth, we truly hope that the summit also will focus on the need for health workers—not only in numbers but also in training, deployment, and ongoing support.

There has undoubtedly been increased international attention to family planning over the past several years, as illustrated during the International Conference on Family Planning in Kampala, Uganda, in 2009 and during the second international conference in Dakar, Senegal, in 2011. (I had the opportunity to attend and blog about both the Kampala and the Dakar conferences.) Despite this attention, however, the report documents that the annual increase in modern contraceptive users between 2008 and 2012 was significantly lower than between 2003 and 2008—10 million versus 20 million per year.

The Guttmacher Institute and UNFPA report outlines the grim ramifications of the unmet need for family planning. In 2012, an estimated 291,000 women in developing countries will die from pregnancy-related causes; more than one-third of these women will not have wanted to become pregnant. And approximately one-third of newborn deaths and one-fourth of later infant deaths are associated with unintended pregnancies.

According to the report, 645 million women of reproductive age (15–49 years) in the developing world are now using modern contraceptive methods, up from 603 million in 2008. However, population growth accounts for about half of the increase. The overall proportion of married women using a modern method—92% of all modern method users—plateaued between 2008 and 2012, at just over 50%. However, there were significant regional variations, with substantial increases in Eastern Africa (from 20% to 27%) and Southeast Asia (from 50% to 56%), and stagnation—or even declines—in countries in Western Africa and Central Africa, where fewer than 10% of married women use modern contraceptives.

To meet the global unmet need for family planning, the report calls for the “training of health workers and others involved in provision of these services” as well as improved access to high-quality services.  This includes not only training health workers to administer contraceptives but also to offer counseling and follow-up support and to recognize clients’ rights. Offering client-friendly services means that health workers have to be skilled to respect confidentiality and provide family planning services—to adolescents and unmarried individuals, too—with a nonjudgmental attitude. Tracking health workers is important, too. The report also calls for systematic data collection of indicators, including numbers of health workers and the training they receive.

Saving Lives Saves Money—and It Does Take a Health Worker

Meeting the unmet need would not only save lives: it would save money, too. Given the current global economic environment, cost-effective solutions are essential. The current level of contraceptive care in the developing world costs about $4 billion annually but saves $5.6 billion in maternal and newborn health service costs. Fully meeting all need for modern contraceptive methods would cost $8.1 billion per year but would save a total of $11.3 billion. For every dollar spent, $1.40 would be saved. Is there another cause or investment opportunity out there that provides more bang for the buck? 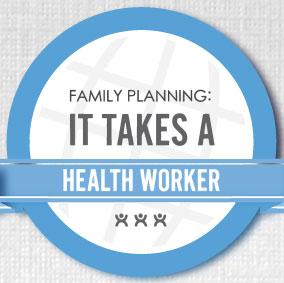