As Ebola Resurges in Guinea, So Do Government Efforts to Quash It Last month, one year after the Ebola outbreak began in West Africa, I traveled to Guinea.

Apart from the routine screening for travelers with high temperatures, there was nothing in the arrival area of the Conakry airport to indicate an Ebola epidemic rages on there. Outside the airport, arriving passengers and their welcome parties shook hands, hugged heartily, and exchanged the traditional multiple kisses on the cheeks.

Haven’t they heard that these are risky behaviors in the midst of such a dangerous, contagious epidemic? I thought. Are the published statistics on Ebola in Guinea wrong, or do people no longer care?

Getting to Work on iHRIS and mHero

I was in Guinea to help the Ministry of Health roll out mHero, a new communication platform that connects health workers to health officials, to each other, and to critical information through the basic mobile phones that most health workers already have.

I worked with Dr. Abdoulaye Diallo, a public health physician posted to the Human Resources Division (HRD) of the ministry, but who spends most of his time with the Surveillance Division of the Ebola Coordinating Unit. I met Dr. Diallo on my last trip to Guinea in February, when the Ministry of Health agreed to implement mHero and iHRIS, IntraHealth’s free, open source software that helps health sectors replace scattershot, paper-based filing systems with electronic personnel records and databases that are easier to share, manage, and update.

Before iHRIS, the ministry was using an old Microsoft Access database to capture data on their health workers. iHRIS allows them much more flexibility to create reports and use the data in more ways, including identifying the right health workers and their cell phone numbers to send messages via mHero. IntraHealth helped the ministry move the data from the Access database into iHRIS.

Internet connectivity and availability of computers with wireless capabilities is a challenge in Conakry, but members of the HRD are excited and determined to make iHRIS a reality there.

Now that iHRIS has been installed at the Ministry of Health and members of the HRD trained to use it, IntraHealth is working with UNICEF to implement mHero.

Together we reviewed and configured requirements for the integration of iHRIS with RapidPro, UNICEF’s open-source SMS platform that can help governments deliver rapid and vital real-time information. These two systems make up the mHero platform.

The Guinean government will use mHero to send targeted messages to health workers throughout the country.

Health workers are at the forefront of the fight against Ebola and in the course of their duties become victims due to poor sanitation and lack of adequate protection. Better education and training can significantly reduce their risks and the depletion of the already inadequate number of health workers in the country due to Ebola infection.

The Guinean government plans to use mHero to send targeted messages to health workers throughout the country, updating them on Ebola safety guidelines and offering a trusted source of information about the virus—a valuable resource amid so much uncertainty and misinformation.

Health workers have the power to end the Ebola epidemic and prevent it from resurging in the future, but only if they have the right training, information, and support from the health sector’s leaders.

mHero can help make that a reality in Guinea not only as the country fights Ebola today, but in the future as it address other health matters such as maternal and child health, HIV, and family planning.

Ebola: Not Yet on Its Way Out

During one of the triweekly sessions of the Ebola Coordinating Unit, I learned that although the epidemic has waned in Guinea, it is not yet on its way out.

New cases are still being reported, burials are taking place that ignore proper procedures, and people who have been in contact with Ebola patients are refusing to be quarantined.

The word “reticence” echoed several times throughout the meeting—something I heard during my last trip to Conakry. The reticence was attributed in part to a lack of effective communication with the population.

Many do not trust the government because of a perceived lack of transparency and truth in government dealings and messages on the Ebola crisis. Also, some highly placed persons in the government seemed to be playing politics with the issue.

But if health workers are well informed, they can help change this by spreading accurate, timely information throughout their communities.

A new law will soon enforce quarantine. Some beds, which treatment centers had optimistically closed in the wake of declining new cases, must now be reopened, especially in Conakry.

This is why the government of Guinea is scaling up its response efforts. The government is launching a massive reinvigoration of the anti-Ebola campaign, and mHero is just one part of that.

I do wonder what the arrivals hall at the airport will look like on my next visit to Conakry.

Follow IntraHealth's special coverage of Ebola in West Africa—and find out how mHero and other mobile tech can aid the recovery. Internet connectivity and availability of computers with wireless capabilities is a challenge in Conakry, but members of the HRD are excited and determined to make iHRIS a reality there. Photo courtesy of Kayode Odusote. 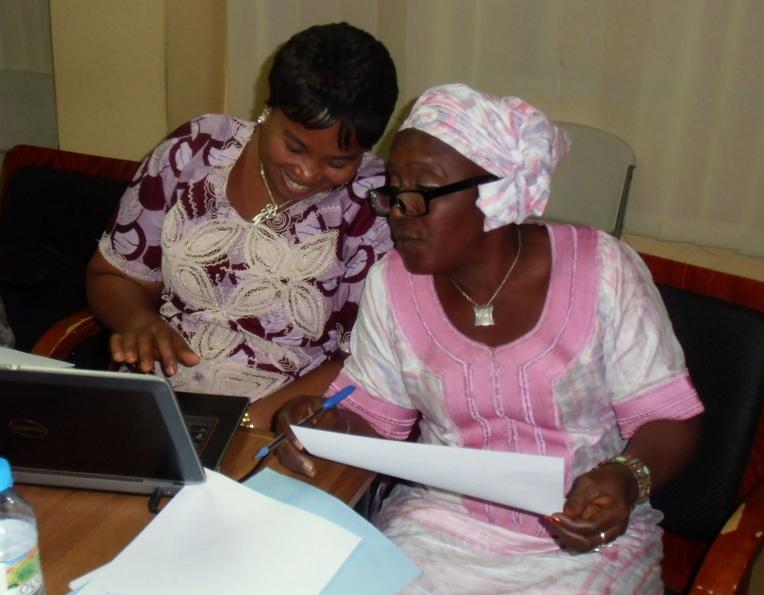 Before iHRIS, Guinea's Ministry of Health was using an old Microsoft Access database to capture data on their health workers. iHRIS allows them much more flexibility to create reports and use the data in more ways, including identifying the right health workers and their cell phone numbers to send messages via mHero. IntraHealth helped the ministry move the data from the Access database into iHRIS. Photo courtesy of Kayode Odusote.

COVID-19: Looking for Helpers in the Medical Hardware Community

These 10 Trends will Define Digital Health in the Next Decade