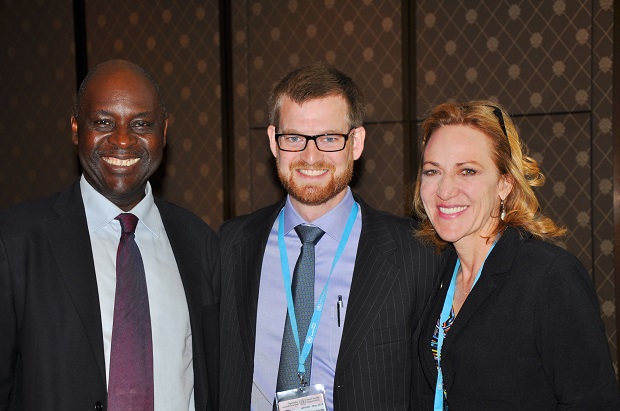 Brantly, the first American doctor known to have contracted the virus, was attending the World Health Assembly (WHA)—the annual gathering of the World Health Organization—for the first time. He talked about his work in the ELWA (Eternal Love Winning Africa) hospital in Monrovia, Liberia, where he had moved in October 2013. He was at ELWA when its first Ebola patients arrived in June 2014. Brantly spoke of the need to quickly get up to speed, and explained that during the first week when they were treating suspected cases, he and the hospital teams were using Ebola protocol documents that they had copied from a 1998 manual produced by the US Centers for Disease Control and Prevention.

Ebola certainly changed everything for the families, friends, and communities of the 11,135 people known to have died from Ebola Virus Disease to date. This number includes 507 health workers who died as a result of caring for the nearly 27,000 people confirmed or suspected to have been infected with the virus.

Last year, Dr. Margaret Chan, director general of the WHO, highlighted the growing pandemic of obesity and other noncommunicable diseases, especially in low-income countries during her opening address to the 67th WHA. The 2014 WHA discussions focused on the last push to meet ambitious targets set by the Millennium Development Goals, and on the future of Sustainable Development Goals.

But Ebola changed everything.

I had the sense at the time that the global discourse had shifted from “us vs. them,” from how to handle dire, acute health issues unique to low-income countries to a “we’re all in this together” perspective.

But Ebola changed everything.

Sitting in the United Nations Palace last week, I was struck by how different the discussions seemed to be. There were more than 3000 delegates to last week’s 68th WHA.  We heard versions of “Ebola changed everything” over and over again. We first heard it during the opening plenary speech from Angela Merkel, Chancellor of the Federal Republic of Germany, who called for a new global strategy and plan to address health “catastrophes,” and said that the Ebola outbreak highlighted the need for both strong health systems and for collaboration and coordination in global health emergencies. Addressing the delegates, Merkel said "The WHO is the only international organization that has universal political legitimacy on global health issues.”

Dr. Chan, who has been put on the defensive regarding what some consider a delayed and somewhat uncoordinated response to the Ebola outbreak on the part of the WHO, outlined plans for a new cross-cutting WHO program for emergencies, Chan spoke of a new global health emergency workforce and of a contingency fund of $100 million for emergencies. “I have heard what the world expects from WHO. And we will deliver,” Chan said.

Resilient health systems at the forefront

From day one to the end of the assembly, conversations centered around the need for strong health systems, operations able to withstand a range of emergencies, from infectious disease epidemics like the Ebola outbreak, to natural disasters such as the earthquakes in Nepal, to ongoing and new conflicts around the world. Emergencies, conflict, and violence strain even the strongest of health systems, and break the weakest ones.

Strong health systems—and the health workers within them—are essential to all health goals, whether tackling Ebola, maternal and child mortality—or obesity and diabetes.

Dr. Chan spoke of the need for “resilient health systems,” and of reinforcing the International Health Regulations, which regulate outbreak preparedness and response in her opening address. She also reiterated the importance of strong health systems in the post-2015 Sustainable Development Goals, noting that financing is needed to achieve new global goals such as universal health coverage, as in some countries maternal and child health mortality rates are still high—and infectious diseases remain while noncommunicable diseases grow.

Strong health systems—and the health workers within them—are essential to all health goals, whether tackling Ebola, maternal and child mortality—or obesity and diabetes.Last year, the 2014 WHA discussed the need for a global health workforce strategy, resulting in a new resolution requiring the WHO to present a strategy by 2016. The global deficit of health workers, then estimated at 7.2 million, was projected to grow to 12.9 million by 2035. The global and country-level numbers compelled the assembly to take action. But last year, the numbers seemed important primarily because they were daunting. This year, the numbers had faces attached to them, and several planned and spontaneous vigils were held for the health workers who had sacrificed their well-being—and sometimes their lives— while providing lifesaving care for others.

At IntraHealth, we see the global health workforce deficit not only as big numbers, and not only as one component of the WHO’s health system “building blocks” but as the human beings, the people, who make health systems function. We recognize that no service is possible, no supply chains or information systems are functional, and no governance of truly “resilient” health systems is possible without people, both those on the front lines of care, and those behind the scenes making the wheels turn.

It does feel as though Ebola has changed everything. I hope that, ultimately, those who sacrificed their lives did not do so in vain, and that we in the global health community will apply the lessons we should have learned by investing more in strong health systems—and especially in the people who make them possible.