Cesarean deliveries have become increasingly safe in Rwanda thanks to the efforts of the government and its partners to train and prepare health providers to perform these surgeries.

By MOMENTUM
USAID suite of awards

Cesarean deliveries have become increasingly safe in Rwanda thanks to the efforts of the government and its partners to train and prepare health providers to perform these surgeries. However, pregnant women with previous cesareans are at higher risk of pregnancy complications, including uterine rupture, if not closely monitored in health facilities.

Preliminary results of the Confidential Enquiry into Maternal Deaths (CEMD) in 2019 ranked cesareans as the highest maternal mortality risk factor in Rwanda. Confidential inquiries into maternal deaths are one type of maternal death surveillance and response. They are intended to go beyond counting numbers of deaths for statistical purposes, to provide insight into possible factors that may be addressed to reduce future deaths. The inquiry revealed existing gaps in follow-up of women with obstetrical complications during pregnancy in antenatal care, leading to an increased risk of maternal death in mothers with previous cesarean procedures. 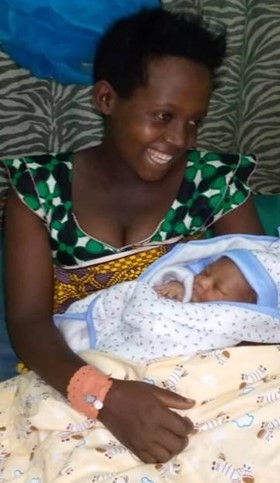 Mukankotanyi Yvette is a 27-year-old mother of three from Ngoma District in Rwanda’s Eastern Province who experienced these gaps in care. When she was due to deliver her youngest child, she was unaware that she needed to be closely monitored at a health facility due to cesarean scars linked to her previous deliveries. This was despite regularly attending antenatal care appointments at her local health center.

MOMENTUM Safe Surgery in Family Planning and Obstetrics Rwanda is working in all 20 USAID Ingobyi-supported districts, including 26 hospitals and 325 health centers to actively provide follow-up care to pregnant women with previous cesarean surgeries. Some 1,307 pregnant women have been identified and referred to hospitals to prevent the risks of developing complications.

Uwiringiyimana Marie Assumpta is a district-based mentor with the Ingobyi Activity, a USAID project that partners with MOMENTUM in Rwanda, assigned to Rukoma Sake Health Center. She conducts regular mentorship for the Antenatal Care Unit (ANC) and maternity staff. During her visits to the ANC unit, she monitors the active follow-up of women with a history of cesareans and hypertension during pregnancy. She also selects and contacts a few mothers in the ANC follow-up register to discover how they are doing. She reached out to Mukankotanyi Yvette to learn if she had contacted the hospital for a delivery plan as recommended. In response, Yvette said she was at home and was starting to feel abdominal pains. Immediately Marie Assumpta called the head of the health center and the community health worker (CHW) to arrange to bring her to the health center.

On March 22, 2022, Yvette delivered a healthy 7.2-pound (3.3 kg) baby boy through cesarean section. “I am really happy that we were able to save Yvette from potential danger. This is all thanks to the active follow-up of mothers, which we didn’t do previously,” says Marie Assumpta.