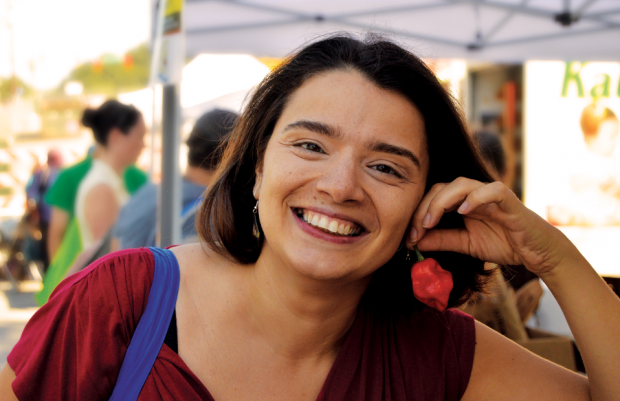 Our friend and colleague Raluca Iosif was a recognized global health expert. She worked long hours, and lived with good cheer and a deep commitment to her friends, family, and colleagues. Fluent in five languages, Raluca traveled the world to help develop programs that bring health care to those in need.

Raluca grew up in Bucharest, Romania, where she became a lawyer, then immigrated to North Carolina.

On Oct. 6, 2015, just a few days after celebrating her 40th birthday, Raluca was murdered in front of her home in Durham by a man she had dated for a couple of months and with whom she had just broken up. On the evening of her murder, the killer also shot and seriously wounded Raluca’s brother before committing suicide.

As reported in her obituary, “With an exuberant spirit, and her Airedale rescue, Mr. Bingley, at her side, Raluca was always ready with a helping hand, a funny story, and a definite opinion on almost everything.”

One year later— sadly, but fittingly, during Domestic Violence Awareness Month—we are reflecting on what we have learned since Raluca’s death.

First, we have learned that more than half of the homicides that occurred among women in North Carolina in 2012 (the last year for which such data are available) were linked to intimate partner violence. That is, women in North Carolina are more likely to die in one year at the hands of a current or former spouse or intimate partner than by any other person in their lives, as a neighbor of Raluca’s, Carolynn Dude, wrote in a piece on Nicolas Kristof’s New York Times blog.

We also have learned—or at least begun to better understand—the ways in which women of all ages, social classes, and backgrounds can become victims of fatal intimate partner violence. (This is movingly portrayed in a film called Love Her to Death, which documents the cases of 86 women who died in the United Kingdom at the hands of their male partners or ex-partners in 2013.)

We have learned that some experts refer to fatal intimate partner violence as intimate partner femicide, in contrast with “homicide” or “domestic violence,” to specifically denote the killing of women by current or former legal partners, common law-partners, or boyfriends, including non-cohabiting intimate partners. Intimate partner femicide is one part of a societal pattern of violence against women. The term brings us closer to understanding the disproportionate fatal violence experienced by women every day at the hands of someone who “loved” them. But new terminology and perspectives are only first steps.

If the numbers of women abused and murdered by their intimate partners represented cases of Ebola or Zika virus, would we not see higher levels of concern and action? But we’re not. Why? In large part, there is disinterest and some acceptance, in general, of violence against women as a means of control in abusive relationships. Another key challenge—as we wrote last year in a News & Observer point of view—may be the lack of data and awareness—and, ultimately, activism—in respect to this scourge.

In our piece, “A friend’s shooting death not just bad end to private relationship,” we called for better data, accurate information, dedicated resources, public education, and dialogue to prevent intimate partner violence and to improve the safety of women who want to leave controlling partners and potentially dangerous relationships. The U.S. Centers for Disease Control and Prevention (CDC), in a 2015 publication titled Intimate Partner Violence Surveillance, also recognized the need for better data and definitions and more research, stating: “Higher quality and more timely incidence and prevalence estimates have the potential to be of use to a wide audience, including policymakers, researchers, public health practitioners, victim advocates, service providers, and media professionals.”

After Raluca’s death, IntraHealth International created a memorial fund in response to an outcry from colleagues and community members who wanted to take action to commemorate her life. This October, one year after her murder, IntraHealth is partnering with UNC-Chapel Hill to launch the Raluca Iosif Intimate Partner Violence Research Award. The research award will be made available to UNC students studying the prevention of fatal and nonfatal intimate partner violence.

The public launch of the Raluca Iosif Intimate Partner Violence Research Award will take place during a special event from 4-6 p.m. on Oct. 11, in the Reeves Auditorium at the North Carolina Botanical Garden in Chapel Hill. Local experts on the topic of intimate partner violence will speak. Members of the public who wish to attend may contact Nola Paterni by Oct. 10.

This article orginally appeared in the News & Observer.
execteam
directors