A Day in the Life of a Family Planning Health Worker

It took over an hour in notoriously congested Dar es Salaam traffic and gingerly moving through winding, narrow, dirt roads to visit Blandina Mpacha. Mama Blandina, as her community affectionately calls her, is a PSI health worker who teaches women, men, and whole families about the importance of family planning. This isn’t something new to her. Mama Blandina has been a family planning health worker for over twenty years and has seen the slow-going, but eventual change in attitudes toward spacing births. In a country where women give birth to 5.29 babies on average, Mama Blandina is saving lives and giving women a chance to raise their families instead of living in a perpetual cycle of pregnancy.

Greeting us on her front porch where adult shoes and sandals laid strewn about, Mama Blandina first wanted to show us her chickens. It wasn’t just a few adult hens milling about and pecking around; no, it was a coop full of at least seventy growing chickens being raised for sale. For as much as Mama Blandina is a family planning health worker, she is also an entrepreneur and has been for much of her adult life. This is yet another sign of Mama Blandina’s resourcefulness, standing, and importance in a relatively poor community on the immediate outskirts of Dar es Salaam.

“Women would keep quiet when we knocked on the doors. Now, they even come to my house for family planning.”

Blandina Mpacha first learned about being a family planning health worker on the only radio station in Tanzania at the time. Back then, she recalled between sips of coffee, only women who worked in offices used family planning methods. Now, for the most part, the stigma has fallen away.

“Those days it was a bit difficult,” Mpacha said through translation. “Women would keep quiet when we knocked on the doors. Now, they even come to my house for family planning.”

Mpacha is on the frontlines of family planning education and services as an interpersonal communications agent (IPC) for PSI’s Familia program, a social franchise network of clinics across Tanzania. Working three days per week and reaching upwards of 200 women per month, Mama Blandina dedicated her life to helping women with family planning early on after meeting a 19-year-old woman who already had three children. Educating and referring girls as young as 16 for family planning services can be tough work Mpacha admitted and can be a “bit difficult”. Her allowance is 77,000 Tanzanian shillings per month; not enough to live on. If there is one thing that can be improved, it’s her pay, she said. “It can be increased.” Furthermore, when Blandina Mpacha visits her clients’ homes she must take a customary gift. All of those gifts, she said, must come out of her pocket which can be burdensome.

Despite the hard work, Blandina relishes being a longtime, popular fixture in her community. “I give it my best even if it’s at night,” she said.

At least two times per week, depending on her schedule, Blandina Mpacha teaches a class about family planning to reproductive and child health clients at Salasala clinic, a member of the PSI’s Familia network of social franchise clinics, which sits a mere five-minute walk from her home. Through a mix of call and response, demonstrations, handouts, and client participation, Blandina hones in on educating mothers and fathers, who show up much less often, about properly spacing births.

On the days Blandina is scheduled to offer classes, the clinic is always packed a PSI Tanzania staffer told me. Today was no different. Every seat was filled with mothers, and one dad, with their babies—all willing participants who learned about the proper and most effective ways to space their pregnancy and also to prevent HIV/AIDS.

Asia was 16 years old when she became pregnant. She never reached secondary school and the likelihood of her going back to finish her education seems remote. Global statistics say that when a girl doesn’t finish her education she has a greater chance of living in poverty and having more babies. Even though Asia only has one child, three-year-old Abdullah, she scrapes by from her earnings selling fried cassava on the roadside. She lives with her mother.

Mama Blandina has known Asia since she was six years old. “She’s like a grandmother to me,” she said also through translation. “We are neighbors. I respect her as a grandmother.”

It’s no wonder, then, that Asia readily admitted hiding her pregnancy from Mama Blandina and tried to avoid her. She also had to avoid showing her pregnancy because the father was an adult and her pregnancy could have been a criminal matter. The father is now absent from Asia and her son’s life. The only person from the father’s family who shows regard for her son is his sister who will bring clothes to Abdullah from time to time.

“The father is around,” Asia said. “We will meet in the streets, but nothing other than that.”

After giving birth at an area hospital, Mama Blandina visited Asia with a customary gift and educated her about family planning. Asia opted for an IUD, but Mama Blandina, who sat nearby, still cautioned her about using condoms because IUDs do not prevent the transmission of HIV. Now 19, Asia only has one son and doesn’t want any more children right now, she said. Undoubtedly her decision is because of Mama Blandina.

Read more from Jennifer James about her trip to Tanzania with PSI, IntraHealth International, and Mandy Moore. 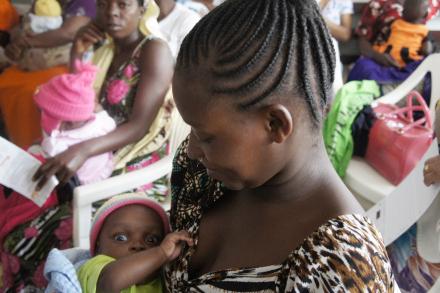 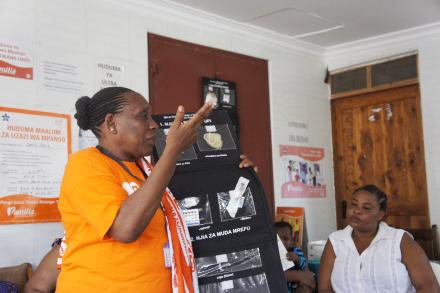 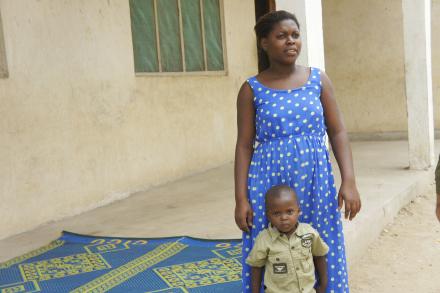 Asia has known Mama Blandina since she was six years old. âSheâs like a grandmother to me,â she says. Now Asia is also an outspoken advocate for family planning. Photo by Jennifer James.