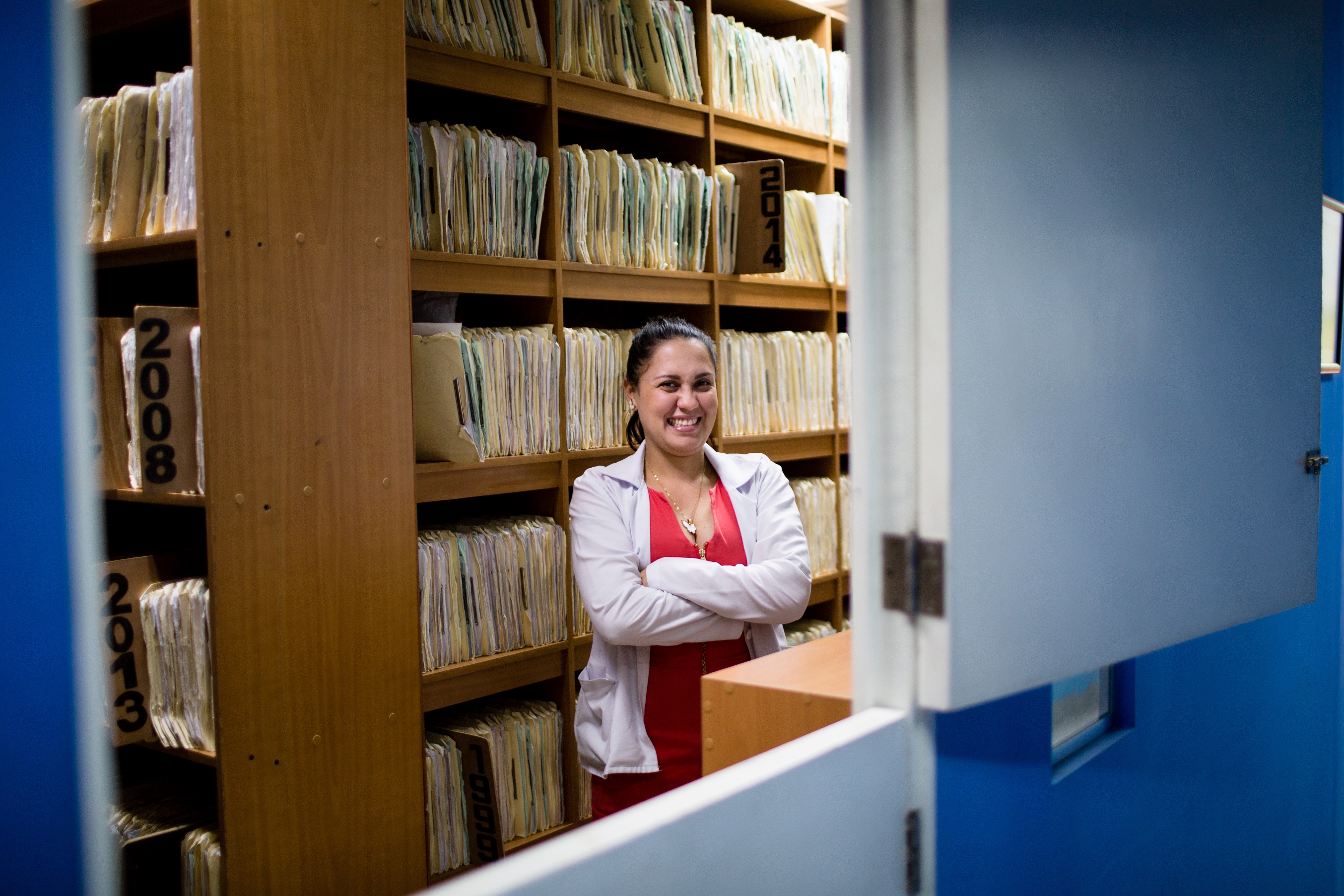 Carlos considered dropping out of everything. Then he met Aracely, an adherence promoter.

Carlos* remembers the exact date he found out he was HIV-positive. He was 20 years old.

“January 20, 2015. I was walking with some friends and, over in the square, we saw a tent where they were giving HIV tests,” he says. “As a group of nursing assistants, we said, ‘Let’s do this! Why not?’”

Carlos sat alone as he waited for his results. He was #45 in the queue that day.

“When they told me I needed additional tests because my results were reactive to virus, I felt my world falling apart,” says Carlos. “I put on my best smile when I met back up with my friends, but the only thing I wanted to do was go home and break down.”

Approximately 46,000 people are living with HIV in Guatemala. The adult HIV prevalence rate is low at 0.5%, but since 2010, new HIV infections have increased by 167% and AIDS-related deaths have increased by 23%. Stigma and discrimination, limited access to health care, and migration make the Central America region vulnerable to a growing HIV epidemic.

Just 36% of people living with HIV in Guatemala are enrolled in antiretroviral treatment (ART) and only about 65% of people on ART are adherent—taking their medication every day, exactly as prescribed—as measured by their viral load. ART adherence is required to suppress viral load and reduce risk of HIV transmission, avoid virus mutation and drug resistance, and prevent AIDS-related infections. Sustained ART adherence has profound effects on overall health and prevention of transmission.

IntraHealth International is working with health facilities and communities in Guatemala and other countries in Central America to improve the lives of people living with HIV and achieve the UNAIDS 90-90-90 goals (90% of HIV-positive people knowing their status, 90% of people diagnosed with HIV on ART, and 90% of clients on ART achieving viral load suppression by 2020).

“I came with a very low weight.”

In March 2017, more than two years after being diagnosed with HIV, Carlos went to a Comprehensive Care Unit in Guatemala City. “I came with a very low weight,” he says.

Carlos started on a new HIV medication. And although he suffered some side effects, he kept up with his treatment.

He was still working as an assistant nurse and living in the city with his parents and 12 brothers. After starting ART, Carlos told family that he was HIV-positive. They supported him right away.

A few months later, Carlos noticed his lymph nodes were swollen. He went to see a doctor and found out he had tuberculosis. He had to stop the treatment he was on and start another medication.

“This was a very hard blow,” he says. Even worse, the health center where he was treated reported Carlos's diagnosis to the hospital where he worked. He was immediately fired.

Carlos fell into a deep depression. “Absorbing what happened to me was very difficult. I considered dropping out of everything,” he says. “I didn’t have the strength to keep going.”

The project trained and deployed 27 adherence promoters to work across 30 HIV clinics in Central America—including seven clinics in Guatemala—to provide counseling to people living with HIV who are newcomers to the clinic or recently started ART. Adherence promoters encourage HIV clients to attend routine medical appointments, identify clients at risk of dropping out of ART, link clients to other health or social services, and follow up with people who don’t show up for their appointments. They work closely with community liaisons, who conduct home visits to clients who drop out of treatment.

Aracely Zometa has been an adherence promoter since 2016 and works in the San Juan de Dios Hospital Comprehensive Care Unit.

“Aracely is a wonderful person. From her I learned to enjoy life again,” Carlos says.

“Some patients are very adherent,” she says. “To them I speak candidly and advise them to not let up. And that having an undetectable virus load does not mean skipping pills, or not using a condom.”

Aracely noticed one of her clients—Carlos—needed to focus more on his treatment. “He’s a very active person, and always concerned about others. I told him that he has to get some rest and be concerned about himself,” she says.

After many hours talking with Aracely at the Comprehensive Care Unit, Carlos has remained adherent to treatment. His viral load is currently undetectable.

Adherence promoters in Central America have helped retain more than 4,000 people at risk of dropping out of ART.

“Aracely is a wonderful person. From her I learned to enjoy life again,” Carlos says. “She always asks about my life, how I am doing at school. Her support has been crucial for me.”

Together adherence promoters and community liaisons in Central America have retained more than 4,000 people at risk of dropping out of ART (73% of all potential dropouts identified) and have recovered 2,570 people who had dropped out of treatment.

These positive results motivated the Ministry of Health of Panama to absorb some of the adherence promoters into its budget. Other ministries in the region are making similar efforts.

Carlos is now a nurse in the intensive care unit in a private hospital located in one of the wealthiest zones in the city.

He says society is still not prepared to fully accept people living with HIV. “I was also part of the crowd and knew nothing. [Before], when I had to care for a person living with HIV, I did so in a very fearful manner,” he says.

Nowadays one of Carlos’s goals is to become an expert on caring for people with HIV. He’s also working to combat stigma and discrimination. “People lack education,” he says. “I found a course offered by a university in Guatemala. It specializes in HIV, and I hope I can take this course in the next year.”

*Name has been changed to protect the individual's privacy.

HIV data for this post is from the UNAIDS 2016 Guatemala fact sheet.

Read more about the approaches and results of the USAID Central America CapacityPlus Project (CAMPLUS).