I am currently in a very small North Carolina town known for a few things: its infamous ballroom that was converted into a world class event space from an old, historic cotton mill, its Gastropub, its craft beer, as well as its pristine location on the Haw River about twenty minutes from Chapel Hill.

I’m here for the SwitchPoint conference that fuses a combination of music, art, microlabs, and 15-minute talks on a wide variety of issues ranging from using drones in humanitarian crises to being implored to add more Africa into our timelines and not accepting the narrow narrative arc of the continent.

We heard from extremely talented innovators, social entrepreneurs, and others who are innovating on ideas that are shaping the world.

SwitchPoint is presented by IntraHealth International, the 35-year-old global NGO that works in innovative ways with health workers in 100 countries. SwitchPoint is IntraHealth International’s flagship conference where experts, and storytellers, and doers on the ground (wherever in the world that is) convene for two days for a conversation about ways to partner, collaborate, and innovate on ideas.

After the first day at SwitchPoint I walked away knowing there are new ways to reach online and offline communities with messages that moms want to hear and share—issues that not only affect women and children here in the United States, but globally as well.

We heard from extremely talented innovators, social entrepreneurs, and others who are indeed innovating on ideas that are shaping the world really as we know it.

The day started with Patrick Meier, who founded the Digital Humanitarian Network. He talked about the worldwide use of drones in places like Namibia for conservation efforts and in Haiti where after Hurricane Sandy drones were used to find standing water and flooding across the island country.

We also heard from Manoj Mohan, an assistant professor of public policy at Duke University. He implored everyone to be careful about scaling up ideas because great ideas do not always translate into effective change in communities in low- and middle-income countries despite a team’s (usually a large team) efforts. He asked at what point do we celebrate innovations. He also asked us are we treating more people or are we simply treating people through different channels.

Kennedy Odede, the founder of Shining Hope for Communities, in Kibera, Kenya, told us to always do more with the privilege we have, saying, “If you are privileged, don’t deny it. You are able to do more.”

West Africa is still dealing with a crisis.

One of the early themes of the day was the global health response to the Ebola crisis.

Last year around the same time, Pape Amadou Gaye, IntraHealth International’s president and CEO, said West Africa was in the primary throes of dealing with Ebola. While much of the crisis has abated, the experts who talked about their work in the region asked us not to forget about those who are affected by the disease because it has been out of the news for six months. Even though it is out of sight, out of mind, West Africa is still dealing with a crisis by not only not having enough frontline health workers, but also not having the adequate supplies to do their work and to strengthen their country-wide and local health systems.

Neil Brandvold, a freelance photojournalist, knows the region well and the reaction to the crisis. He covered the Ebola outbreak for major media throughout the height of the ordeal. Speaking passionately about his work, but more importantly about the survivors and health workers he photographed, he said “his job as a freelancer is to tell under-told stories.”

Toward the end of the day we heard a flurry of ideas from using poetry to tell authentic stories, to using cause-marketing communications to hit at the heartstrings of what people care about, to making sure that we put more Africa into our timelines. Kenyan social and digital innovator Mark Kaiga, told us to look at the two extremes of Africa, one that is based on poverty but also of the future capabilities of the continent. He also asked us to look at the stories in between.

To answer the question from this post's title: Can creative innovators forge global health and humanitarian change? Yes, they have and are.

The featured photo is a massive puppet from Paperhand Puppet Intervention.

We're lucky ducks! Got to have lunch with @jenniferjames, founder of @socialgoodmoms, at #SwitchPoint today. pic.twitter.com/HJdhJOqWfg— IntraHealth Int'l (@IntraHealth) April 23, 2015

Follow tomorrow’s online activities at #SwitchPoint. I am a guest of IntraHealth International to cover SwitchPoint. You can also follow my coverage at @jenniferjames and @socialgoodmoms.This post originally appeared on Mom Bloggers for Social Good. Photos courtesy of Jennifer James. 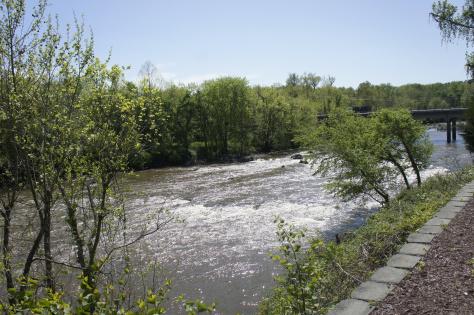 SwitchPoint takes place every year at the Haw River Ballroom in Saxapahaw, North Carolina, on the banks of the Haw River. Photo by Jennifer James.

"As a CHW, she's part of an underappreciated, often underpaid & critical corps of professionals who make sure ppl g… https://t.co/XxX8VsHxF6