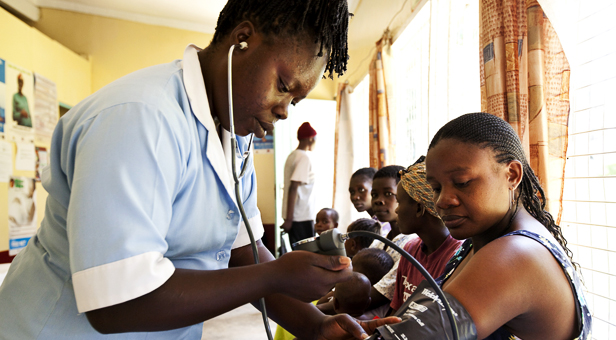 As 2014 comes to an end, the international development community stands on the cusp of major new progress, particularly in global health and development—but the war and disease that marked this year could hinder that progress for decades to come.

Health workers labored on the front lines of some of 2014’s most prominent events, which will likely affect global health and the well-being for all 7 billion of us as we move into 2015 and beyond.

So let's take a look back at some of 2014’s biggest global health and development stories. Some good, some bad, all illuminating as we enter the new year.

5. THE WORLD HAS GOTTEN YOUNGER.

Today over 2.9 billion people—nearly half the world’s population—are under the age of 25.

“Never before have there been so many young people,” says Dr. Babatunde Osotimehin, executive director of UNFPA. “Never again is there likely to be such potential for economic and social progress. How we meet the needs and aspirations of young people will define our common future.”

What health workers have to do with it: Health workers and the care they provide will sway the future of this mammoth generation, not to mention the financial success of communities and economic progress around the world as young people join the workforce (and many will choose to join the health workforce).

One of the greatest health concerns for young people worldwide is family planning—or perhaps more appropriately, future planning. It takes health workers to provide high-quality counseling and services related to contraception and sexual health. Girls and young women especially need those services if they’re to be empowered to choose when and if they become pregnant.

4. DISCRIMINATION IS ALIVE AND WELL, BUT WE'RE MAKING PROGRESS.

This was a big year for social change. Public attitudes on race, gender, sexual orientation, and disease status have teetered back and forth between the inclusive and the divisive. In the United States, for instance, 11 states legalized same-sex marriage; at the same time, tension over racial discrimination and police-related violence flared across the country.

And 2014 brought a brand new type of discrimination: one related to Ebola.

Survivors and family members of Ebola victims are often feared and shunned by their own communities. In many cases, that prejudice has extended to non-Africans against Africans—and even against anyone who’s traveled to Africa this year. (Take, for instance, the 1-year-old boy who was kicked out of his day care center in Baltimore, Maryland, during the height of the panic, all because his mother was planning a work-related trip to Senegal.)

We saw the same types of knee-jerk behaviors in the early days of HIV—and they still exist today.

What health workers have to do with it: Fear of the other and of illness can shape a society. It influences our social norms and prejudices, which in turn have a huge effect on health and well-being in our communities. Those norms determine our policies, our behavior, and even how we think about human rights.

Health workers inevitably get caught up in this.

In Uganda, for instance, a new 2014 law made homosexuality a crime punishable by life in prison—and by seven years in prison for anyone who offered aid to a lesbian, gay, or bisexual person. The law was struck down just a few months after it came into being. But during its existence, health workers had to decide whether to risk providing services to these clients—or to turn them in to the authorities.Uganda’s law garnered a lot of attention. But dozens of countries have long had similar laws on the books.