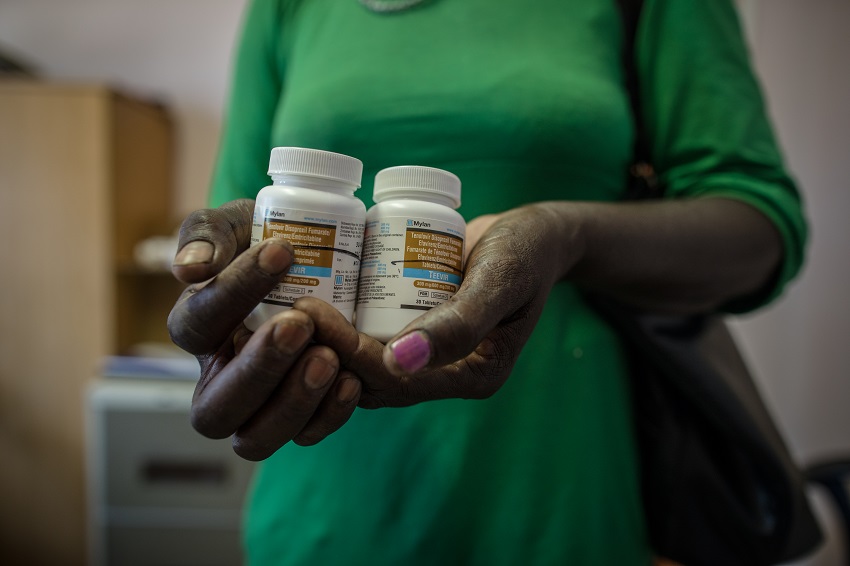 A patient holds antiretroviral medications at a health facility in Northern Namibia. Photo for IntraHealth International by Morgana Wingard.

In 2018, an estimated 200,000 people were living with HIV in Namibia, with regions in the north and capital city having the highest burden. Now Namibia is one of three sub-Saharan African countries that have achieved the UNAIDS 90-90-90 fast-track targets; still HIV/AIDS remains the country’s number one cause of death and disability.

With support from the US Agency for International Development, UTAP worked in eight districts and 77 sites, testing 461,020 individuals for HIV and connecting HIV-positive clients with ART within seven days of diagnosis.

By September 2019, 42,578 individuals were receiving ART and the rate of same-day ART initiation for new HIV-positive patients in eight high-volume facilities had increased from 15% in 2016 to 82% in 2019.

A breakthrough in client-centered HIV care

UTAP focused on client-centered HIV care to better address clients’ preferences and reduce costs associated with frequent visits to health facilities at a time when such client-centered service delivery approaches were rare.

Community adherence groups brought together people living with HIV who are on ART so they could offer each other support, advice, and encouragement to stay on their treatment regimens. The groups also helped health facilities retain their clients. Between 2017 and 2019, UTAP helped increase the number of community adherence groups (CAGs) from 40 to 484, serving 4,154 clients.

In 2018, UTAP started providing HIV testing services in the emergency room in five hospitals. Between 2018 and 2019, 2,598 individuals were tested for HIV in emergency rooms.

UTAP conducted districtwide trainings for health workers in all eight districts on provider-initiated HIV testing and counseling (PITC) and HIV rapid testing in hospital departments and facilities. The project shortened the training curriculum from five days to two-and-a-half and conducted trainings at district hospitals rather than at offsite venues. These changes reduced training costs, increased the number of health workers trained, and improved testing and diagnosis of new HIV positive cases from 60% in 2015 to 90% in 2018 and 2019.

In addition, the project trained a team of district trainers who now conduct ongoing training and mentorship.

By July 2020, the system was being used in 180 health facilities by 225 staff and is continuing to expand.

UTAP also contributed to these successes:

IntraHealth’s USAID HIV Clinical Services Technical Assistance Project (UTAP) in Namibia was funded by the US Agency for International Development (USAID) through the President’s Emergency Plan for AIDS Response (PEPFAR).