Before IntraHealth began working in prevention of mother-to-child transmission (PMTCT) in Ethiopia in 2003, such services were not available at any government health center in the country. When antiretroviral drugs are available as prophylaxis during pregnancy, delivery, and breastfeeding, HIV transmission can be reduced from approximately 35% to less than 5%1.

Now IntraHealth is supporting 511 such facilities to offer such services. Alem Bank and Legetafo are two health centers where health workers are now helping newborns stay HIV-negative and giving prospective and new mothers the care and counseling they need if they are HIV-positive.

Ethiopia’s adult HIV prevalence is low by African standards—1.5% according to the 2011 Demographic and Health Survey (DHS)—but it has actually risen slightly from 1.4% in 2005. And among those Ethiopians living with HIV, some 66,000 pregnant women are not getting the care they need to prevent transmitting HIV to their infants during pregnancy, childbirth, and breastfeeding. 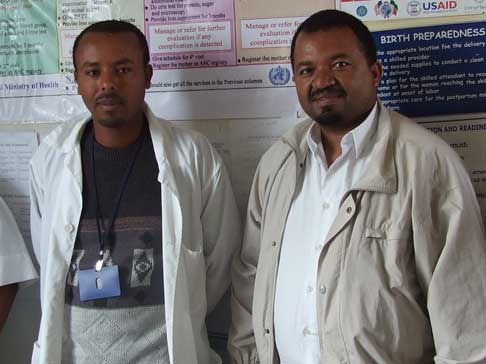 To address that gap and contribute to UNAIDS’s goal of eliminating global new HIV infections in children by 2015, IntraHealth strengthened its efforts to help more mothers get treatment and deliver healthy infants in 2009 with the launch of the Community Prevention of Mother-to-Child HIV Transmission Project.

With support from IntraHealth, Alem Bank Health Center began offering PMTCT services in 2010 in the Kolfe/Keranyo neighborhood of Addis Ababa. The health center serves a total population of 127,447 even though it was built to serve only 40,000. Legetafo Health Center has been providing PMTCT since 2011 in the Oromia Region, 22 kilometers northeast of Addis Ababa, and serves a population of 14,580.

Since starting work with IntraHealth, health workers at these facilities have helped 41 HIV-positive mothers deliver babies2 and have diagnosed only one baby as HIV-positive. That baby is now on antiretroviral treatment and doing well.

Health workers have achieved this by implementing a comprehensive, focused approach to PMTCT that is applied at every stage of the process—antenatal, delivery, and post-natal—with meticulous records kept at each stage. The health centers follow a 6-6-6-6 approach: the mothers stay 6 hours after delivery and come back for post-natal care after 6 days, 6 weeks, and 6 months.

The approach includes a strong focus on HIV counseling and testing for all husbands and boyfriends involved and at all stages of the process.

Women are strongly encouraged—but never mandated—to be tested. Ideally, they are tested long before they deliver, but if not, they have other opportunities, including right up to the time they are about to give birth, a practice known as “couch counseling.”

Most of the babies born to HIV-positive mothers are tested when they are six weeks old. Any babies found HIV-positive are immediately put on antiretroviral treatment.

The centers also try very hard to get the women’s partners to come in for counseling and testing. The  Legetafo Health Center manager says partner testing is one of his biggest challenges though it has improved since PMTCT has been offered. It used to be zero. In the last ten months, 260 partners were tested, and only 4 of those tested positive.

In addition to expanding access to clinical services, IntraHealth organizes Mothers’ Support Groups, a peer education initiative that utilizes HIV-positive “mentor mothers” to help other HIV-positive mothers care for themselves and their children.

As soon as a woman is tested HIV-positive, she is offered enrollment in the program and antiretroviral treatment. After the birth of her child, the woman is visited once a week at home by one of the mentor mothers for 18 months. This is to ensure that the new mother brings the newborn to the health center to receive HIV prophylaxis and immunizations, and it is an opportunity to give the new mother health education on such things as the importance of exclusive breastfeeding for six months and family planning.

As of April 2012, 21 HIV-positive mothers were registered in the Mothers’ Support Group at Legetafo; all were on antiretroviral treatment.

Mothers’ Support Groups create a community of women who support each other in ways big and small; they even have a tracing mechanism to track down women who disappear from the program to encourage them to return to the program.

Getting women to deliver at health centers

In Ethiopia, most women have their babies at home: only 10% of deliveries take place within health facilities (although that is an improvement over 6% in 2005)3. However, since the advent of PMTCT, more women seem to be delivering babies at health centers: Legetafo Health Center was averaging 42 deliveries per month in April 2012; before the IntraHealth project started, fewer than 12 deliveries per month were registered at Legetafo.

Offering services that drastically reduce the chance that a mother will transmit HIV to her child is essential to getting more mothers to health center for deliveries, but women also need to feel welcome there.

The IntraHealth PMTCT project has infused the health centers with a new sense of professionalism and desire to increase patient satisfaction that goes beyond HIV prevention, care, and treatment.

For example, the Legetafo center has introduced a suggestion box, unusual in Ethiopia, and encourages patients to submit comments, complaints, and ideas on the health care they have received. Management uses those comments to rate staff members—by name—on a monthly basis which management displays publicly for all to see.

Both centers also perform traditional coffee ceremonies for the pregnant woman and her partner just before childbirth. It is this kind of customer-focused approach, IntraHealth believes, that encourages women to come to the health centers for all kinds of health care.

The Community Prevention of Mother-to-Child HIV Transmission Project is led by IntraHealth International and funded by the United States Agency for International Development.

1. Global Plan Towards the Elimination of New HIV Infections Among Children by 2015 and Keeping Their Mothers Alive, UNAIDS, 2011 and Antiretroviral Drugs for Treating Pregnant Women and Preventing HIV Infection in Infants: Recommendations for a Public Health Approach, WHO, 2010.

Novel Approaches in Tanzania Lead to HIV Services for Over 1.3 Million Clients