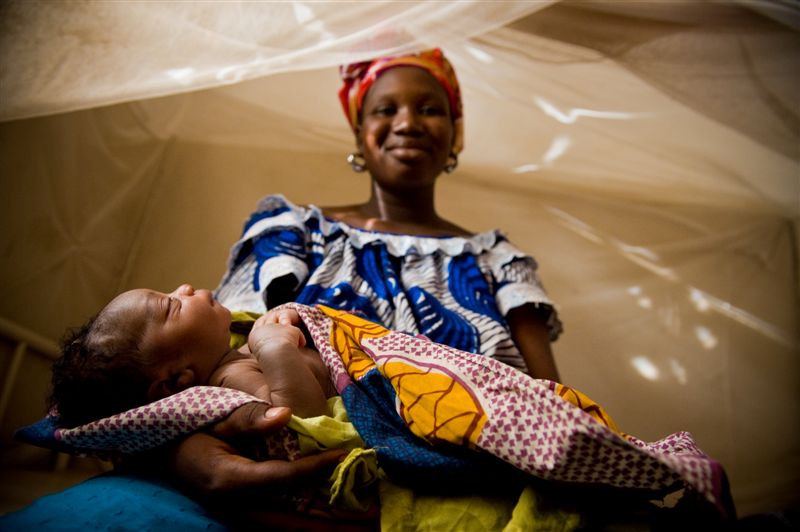 The number of individuals protected from malaria and other mosquito-borne illnesses in Senegal skyrocketed last year, thanks to a national long-lasting insecticide-treated bed net (or LLIN) campaign led by IntraHealth International in partnership with Senegal’s National Malaria Control Program. In 2015, only 8% of beds throughout the country were covered by a LLIN. By the end of the 2016 campaign, 91% were covered, according to project monitoring data.i

Malaria is the third-leading cause of death in the country. The entire population is at risk, but young children and pregnant women are among those most likely to suffer acute illness, complications, and death. Malaria contributes to the country’s high child mortality rate of 59 deaths per 1,000 live births.

But Senegal has made significant progress toward eliminating malaria over the last decade. A combination of community-based and health-systems approaches—including routine insecticide-treated net distribution, improved malaria diagnosis and treatment protocols, and the use of intermittent preventive therapy among pregnant women—have put malaria on the decline.

We have not totally overcome malaria, but we are on the right path to the final victory. - Dr. Bouna Ndiaye, Chief Medical Officer of the District of Keur Massar.

Malaria prevalence in children under the age of five fell from 6% nationwide in 2008 to 1.2% in 2014. Now, Senegal is ramping up its efforts to reach its ambitious goal of pre-elimination of malaria (or fewer than 5 cases per 1,000 people) by 2020.

One of the most effective ways to prevent malaria is through LLINs. In 2010, Senegal launched a strategy for distributing these bed nets, but the first campaigns targeted specific regions. In 2015—before the national campaign began—only 8% of beds nationwide were covered by an LLIN.

Thanks to a grant through the Global Fund to Fight AIDS, Tuberculosis and Malaria, IntraHealth and the National Malaria Control Program organized the first national campaign targeting the whole population. The campaign ran from February to October 2016 and covered all of Senegal’s 14 regions. In 2016, the project distributed a total of 8,144,610 LLINs.

Local health sector leaders are already reporting large reductions in malaria. In the district of Keur Massar in the Dakar region—home to a population of about 600,000—less than 1% of households had insecticide-treated mosquito nets prior to the campaign.

”We see a significant decrease in malaria incidences,” says Dr. Bouna Ndiaye, Chief Medical Officer of the District of Keur Massar. “We have not totally overcome malaria, but we are on the right path to the final victory.”

At first, the nets were distributed to delegates in large assembly areas and schools, but later, the district leaders decided to bring them closer to the people who needed them. They involved community-based organizations and community health promoters called Bajënu Gokh. Home visits helped the campaign make sure people not only had nets, but were sleeping under them. A mobile caravan spread messages directly to communities about how to prevent malaria and use the nets.

Local champions were essential to the campaign’s strategy. In the district of Oussouye, in Ziguinchor region, King Sikilumbaye Diédhiou embraced the campaign, organized community leaders to distribute nets, and continues to encourage his people to use LLINs.

Despite some difficulties reaching people with LLINs in this rural district, 37,000 LLINs were distributed. After this campaign, and thanks to the commitment of the community health promoters and support of King Sikilumbaye Diédhiou, the coverage rate increased from 5% to 86% in the district.

IntraHealth and our partners continue to prioritize reaching as many people as possible with LLINs and information about preventing malaria.