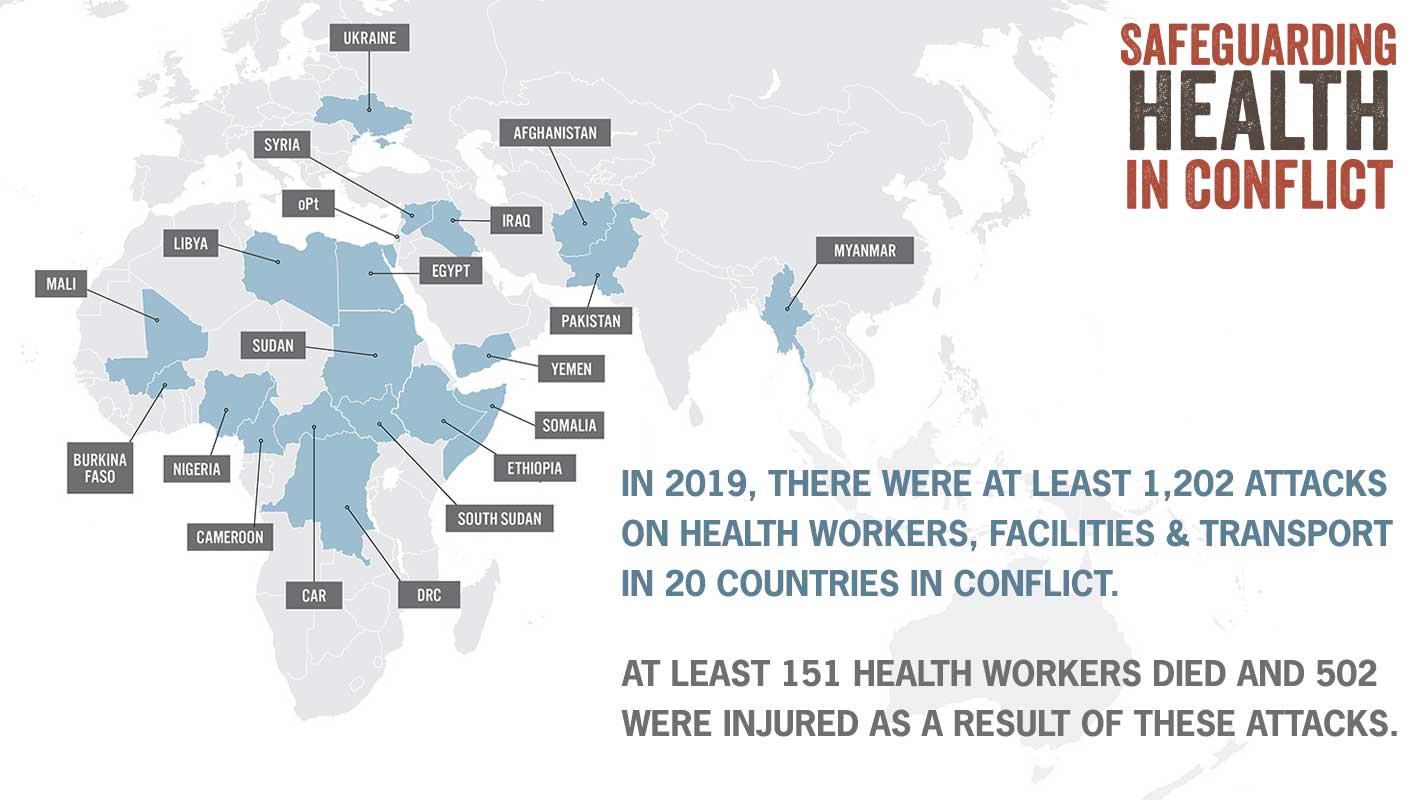 More than 1,200 violent attacks and threats were perpetrated against health workers, medical facilities and transports, and patients in 20 conflict-affected countries in 2019, according to a new report published today by the Safeguarding Health in Conflict Coalition.

The report—the most in-depth assessment of violence and threats to health care in regions experiencing armed conflict and political violence—finds that attacks on health in 2019 continued with impunity, undermined public health, and denied civilians access to life-saving medical services.

The report finds that at least 150 health workers were killed, 90 were kidnapped, and at least 500 more were injured in attacks on health care in 2019.

The 2019 data mark an alarming increase in the number of reported violent incidents compared to 2018, when the Safeguarding Health in Conflict Coalition reported 973 such incidents across 23 countries studied. The true extent of violence against health care in conflict may be much higher due to significant underreporting.

These assaults on health occurred in the months prior to the COVID-19 pandemic, in which strong health systems and protected health personnel are more essential than ever in every country in the world.

2019 was characterized by the aerial bombardment of hospitals in Libya, Syria, and Yemen; medics shot at while attending to injured protestors in Iraq, the occupied Palestinian territory, and Sudan; and health workers kidnapped in Burkina Faso, the Democratic Republic of the Congo (DRC), and elsewhere.

In Afghanistan and Syria, attacks on health care have continued at very high levels for many years. 2019 was no exception, with more than 100 reported incidents of violence each.

The violent incidents severely undermined efforts to respond to major public health threats in 2019. There were more than 400 attacks on health care in the DRC, most of them in connection with the response to the Ebola outbreak. In Pakistan, where polio remains endemic, violence inflicted on vaccination teams led to the suspension of immunization campaigns that left 1.8 million children unvaccinated.

As conflicts escalated in Burkina Faso and Libya, so did the number of attacks on health care, with 73 incidents in Libya alone.

While the Safeguarding Health in Conflict Coalition annual report covers calendar year 2019, violence against health care has also marred the COVID-19 pandemic response in countries in conflict as well as in countries at peace.

Insecurity Insight, a coalition member, reports 265 incidents of attacks and threats against health care from January through May 2020 across 61 countries in response to COVID-19 health measures. These included violent responses to testing, quarantine measures, and attacks against health workers arising out of fear that they could spread the infection.

In some countries, law enforcement entities have used violence to implement quarantine measures and to punish people expressing concerns about the pandemic response.

“Our disturbing findings reveal again that commitments to stopping violence against health care remain thin, more rhetoric than action,” said Leonard Rubenstein, founder and chair of the Safeguarding Health in Conflict Coalition and professor at the Johns Hopkins Bloomberg School of Public Health and Center for Humanitarian Health. “It has been four years since the United Nations Security Council committed the international community to take concrete steps toward prevention and accountability, but the health workers and patients they serve are still waiting.”

The report findings were announced today at an online briefing event hosted by coalition member Physicians for Human Rights (full recording of the briefing event will be posted here).

“Violence against health care continues during the COVID-19 pandemic, both related to ongoing conflicts as well as attacks specifically against COVID-19 response efforts,” said Christina Wille, director of Insecurity Insight. “According to our analysis, community members or members of the security forces who act out of personal interest perpetrated most of the COVID-19-related violence. Violence against health care will make it even harder to address the COVID-19 pandemic.”

In recognition of the 2020 International Year of the Nurse and the Midwife, the Safeguarding Health in Conflict Coalition dedicates the annual report to the nurses and midwives who work every day on the front lines in conflict settings to promote health and save lives.

“Nurses comprise the majority of the health workforce worldwide, and they are often the first and only point of care in many communities around the world,” said Erica Burton, senior advisor, nursing and health policy at the International Council of Nurses, who wrote an essay focused on nurses for the report. “Every time a nurse is taken from the health workforce due to violence against health care, communities suffer.”

“Impunity prevailed for attacks on health in 2019,” said Susannah Sirkin, director of policy for Physicians for Human Rights. “Despite a few limited and narrow investigations, governments, militaries, and the United Nations Security Council have utterly failed to live up to their duty to hold perpetrators of the gravest attacks on health facilities and personnel to account. The global community must do better for the nurses, midwives, EMTs, doctors, and other health workers under siege from Libya to Ukraine to Myanmar.”

The report makes detailed recommendations to prevent and respond to attacks on health, including specific appeals to United Nations (UN) member states, ministries of defense, ministries of health, the UN Security Council, the UN Secretary-General, the World Health Organization, civil society, and donors. Among other recommendations, the Safeguarding Health in Conflict Coalition calls on countries to:

“Health workers receive much-deserved applause and tributes for their lifesaving work in response to COVID-19 and other emergencies, but it should outrage all of us that many continue to face bombs, political violence, kidnapping, and threats,” said Carol Bales, advocacy and policy communications manager at IntraHealth International, which oversaw the report’s production. “Health workers must be safe to save lives. And ensuring safety for health workers includes states taking action to protect them from violence during conflict and holding perpetrators accountable.”

The report implemented an event-based approach to documenting attacks on health care and used multiple, cross-checked sources. The information was consolidated into a single dataset of recorded incidents that were coded using standard definitions, which is available on the Humanitarian Data Exchange. The data was compiled and analyzed by Insecurity Insight. Coalition member organizations contributed additional material from their respective areas of focus and research.

The Safeguarding Health in Conflict Coalition, of which IntraHealth International is the secretariat and a member, consists of 40 organizations working to protect health workers and services threatened by war or civil unrest. The coalition presses governments and United Nations agencies for greater global action to protect the security of health care.

This article was originally published by the Safeguarding Health in Conflict Coalition.