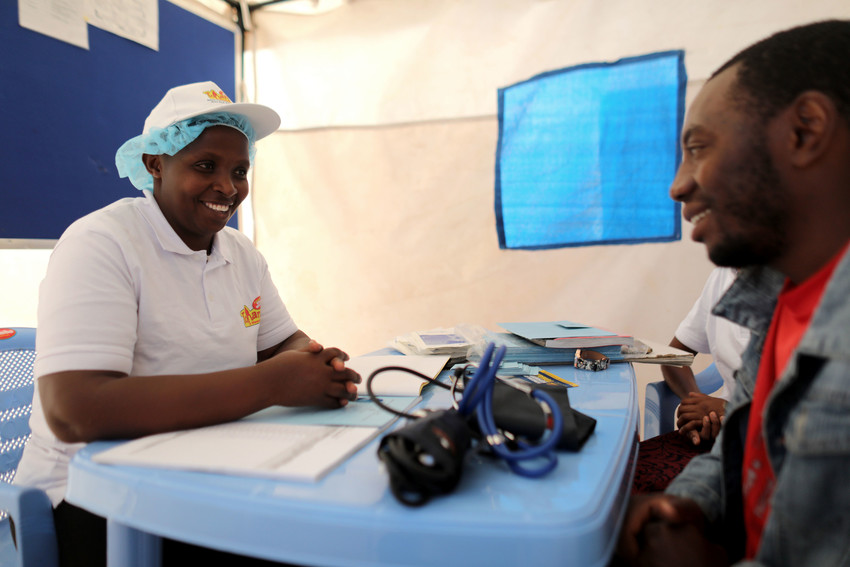 IntraHealth's ToharaPlus project hosts VMMC outreach events to help inform the public about the benefits of the procedure. Photo by Josh Estey for IntraHealth International.

In the Five Lakes region of Tanzania, IntraHealth International has boosted access to voluntary medical male circumcision services, or VMMC, by over 200% since 2016, while simultaneously decreasing the cost per client by nearly 40%.

As part of the ToharaPlus project funded by PEPFAR through the US Centers for Disease Control and Prevention, IntraHealth triangulated census projections, male circumcision prevalence estimates, and program performance data, then paired these data with advice from community experts to micro target areas with greater numbers of uncircumcised men. Then the team got to work crafting localized, targeted interventions for these areas.

Armed with the triangulated data and GIS technology, teams not only locate new clients for VMMC services but also advocate for VMMC. In the case of Mara district, for example, local community leaders were hesitant to allow VMMC service delivery since circumcision was already a longstanding tradition. But data were used to address these concerns by illustrating that the uncircumcised men in the district were primarily members of non-circumcising tribes who were immigrants to Mara.

So far in 2019, this approach has helped the team reach 86% of its target—that’s VMMC for over 345,000 men, according to data from PEPFAR Solutions. The cost of implementation is mainly for staff training and GIS technology licensing, so the approach is efficient and cost-effective. In fact, the use of mapping has streamlined the team’s processes and brought down expenditure from US$50 per client to $31.12.

Because it’s both economical and effective, the use of GIS mapping is well suited to augment programs working to zero-in on areas of unmet need for VMMC, and IntraHealth is exploring how it can be tailored for use in other countries where we work.