Before rebel groups took control of the north, and a coup d’état in March 2012 overthrew what had previously been one of the most stable democracies in West Africa, IntraHealth had been working hard to change Mali's grim maternal mortality statistics.

In March 2012, Demba Traore drove by the main square in Gao, Mali on his way to visit the Gao School of Nursing—Ecole des Infirmiers de Gao (EIG)—a private nursing school in the remote northern region. He was there to deliver a short course for nursing students on obstetric fistula.

At that same square six months later, according to the New York Times, the hands and feet of four young men were ceremoniously amputated. The radical Islamists who have seized control of northern Mali are imposing strict sharia law on the people and had accused the men of robbery.

This is just one of the many human rights abuses that have been reported in the region since March. 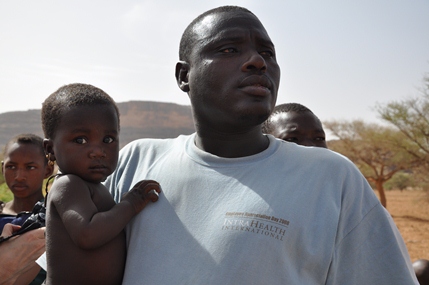 “At the same time rebels are cutting off hands as punishment, they are also marrying the daughters in the community,” says Traore, a medical doctor.

Traore grew up in Bara, a town in northern Mali about 60 kilometers away from Gao, an outpost on the edge of the Sahara Desert. At the urging of his grandmother, who still lives in Bara, he left to attend college and later medical school in the capital city of Bamako, and he went on to earn a master’s degree in public health in France. As IntraHealth’s Fistula Care Project coordinator, he is now based in Bamako and works to improve access to health care in northern Mali.

Giving birth in the north

Women in Mali have an average of 6.6 children and face a 1-in-15 lifetime risk of dying in childbirth. Less than 50% of pregnant women receive skilled care at birth, and more than 75% of the country’s skilled birth attendants are based in the capital.

In the north, giving birth is particularly dangerous. Girls are often married as young as 12 and have babies before their bodies are fully developed. And 85% of women in the north have undergone female genital cutting, which can lead to complications during childbirth.1

Before rebel groups took control of the north, and a coup d’état in March 2012 overthrew what had previously been one of the most stable democracies in West Africa, IntraHealth had been working hard to change these statistics.

In a matter of hours

The local population created the Gao School of Nursing in 1998. And since 2006, IntraHealth has been working with the government and local partners to strengthen and expand the school into a best-practice platform and a model for other regional nursing and midwifery schools in Mali. During the past six years of our partnership, 750 health workers have graduated from EIG and, as of 2011, 95% of them were serving communities in the northern region.

When Gao was attacked, 20 women with obstetrical fistula were recovering at the Gao hospital from repair surgeries provided through IntraHealth’s Fistula Care project. Rebels turned these women—many of them still catheterized—out of their hospital beds and onto the streets. IntraHealth staff has only been able to confirm the whereabouts of twelve of these women, and we fear for the other eight, who were at high risk for infection.

After extensive looting and months of closures, the nursing school is now open. But it is not the same. Men and women now take classes separately. Many professors and students have fled. The hospital and many health centers are open, but most of the doctors are gone, and student nurses from the EIG are now providing the bulk of the care. The students are facing a cruel type of on-the- job training—responding to medical emergencies they are not fully trained to handle in facilities with scarce supplies and resources.

The stories from Gao are disturbing. In May, IntraHealth staff collected the following testimonials from citizens who witnessed their city quickly and violently transform as several different rebel groups vied for control in the north.

“I was assaulted in my home at gunpoint before the perpetrators took my car. Some of them came in from the garage that was unlocked while others climbed the fence. They threatened my maid with a rifle to her throat so that she would guide them through the house in order to find me and get the keys to the car. I tried to talk to them, but they interrupted me and told me not to resist if I wanted to live. They only had one goal in mind: to steal my car.”

“Women and young girls continue to be raped on a daily basis by members of the MNLA [National Movement for the Liberation of Azawad]. Many of [the girls] came to talk to me. A young, HIV-positive woman suffering from obstetric fistula (whose case we recently managed) was kidnapped and raped on numerous occasions over several days. She is now traumatized and does not seem to be in full possession of her faculties.”

Some of the testimonials alluded to other rights violations, but indirectly—rebels offering security in exchange for compliance and daughters to marry.

“Because of their faith, these Islamist rebels [referring to the rebel group Ansar Dine] do not commit rape or adultery. They have all gotten married to girls from Gao with the approval of their parents. Because of these marriages, they are starting to become more integrated into the population, and they are protecting the community from the MNLA bandits [another rebel group]. They also have a toll-free number where they can be reached by the population in case someone gets kidnapped or robbed.”

“The head of MUJAO [the Unity Movement for Jihad in West Africa] got married in Gao. His movement set up its headquarters in what used to be the municipal police stations. Abou Dadar (his war name) is now the chief of police who will implement sharia law. He walks around carrying multiple weapons and looks like a human bomb.”

These early testimonials set the tone for the stories that would emerge from northern Mali over the next eight months. Many events have been substantiated by the rebel groups themselves, who are using social media as a virtual town square, uploading horrific images of amputations and stonings.

Women in the north are now subjected to corporal punishment for wearing the wrong types of veils. According to a report by France 24, one young woman in labor walked two kilometers to a hospital in Timbuktu only to be forced to deliver her baby on the sidewalk; she was not allowed to enter the hospital because the veil covering her was white, not black.

What’s left in the north

Before the rebel groups took over, the north already had a critical shortage of health workers. Now, the situation is even worse. According to an EIG faculty member, virtually all of the health workers who remain to help the population are those who grew up and trained in the north.

While no one would blame them for joining those who have already fled, IntraHealth is proud of the health workers we’ve helped to train who are taking incredible risks to serve. Our Mali colleagues, in particular, bear an emotional toll. They hear daily reports from people they used to work with closely about impossible working conditions and preventable deaths—including mothers dying in childbirth simply because the medicines used to manage obstetrical emergencies are unavailable. None of the students or health workers at the hospital in Gao are being compensated. They stay for the very reason they wanted to become health workers in the first place: to help those in need.

Sharia law is now ruling the north, and health care is precarious. In addition to violent human rights violations, the rebels are also attacking the vibrant culture. Playing or listening to Mali’s world famous music is now a punishable activity, as is talking on cell phones outside the home.

Gao was always far—a two-day drive—from Bamako. But now it seems even farther. IntraHealth staff members in Bamako are doing what they can with their own money and time. They coordinate supply donations to the Red Cross. They continue to pick up their phones and lend their ears to the health workers in Gao who are trying to provide the best care they can in extreme conditions.

Traore takes some comfort in the fact that the health workers we helped to train and support are now saving lives in the north.

We do not know what will ultimately happen there, but we are hopeful that the years we and our local partners put into strengthening the health workforce in Gao won’t be for naught—that we’ll have the opportunity to work side by side with our partners in the north again.

Update: IntraHealth’s Fistula Care Project has resumed activities. However, due to the security situation, the USAID-funded project is unable to operate in the north. IntraHealth’s US Government-funded program activities in Mali were temporarily suspended in April because of the political unrest. Three of the four programs (Keneya Ciwara II, Fistula Care, and ATN Plus) have since been approved by USAID to continue activities under modified scopes of work. IntraHealth is continuing to monitor the security and governance situation. Our office in Bamako remains open, and we hope to soon resume all of our program activities while addressing the changing needs and priorities of the population. Our activities funded by the William and Flora Hewlett Foundation have remained active throughout this time. IntraHealth has a long history of working in Mali and remains committed to helping our Mali-based staff and partners address the population’s ongoing and emerging needs for health services.

2. Obstetric fistula: A hole that develops between the vagina and the bladder or rectum during prolonged obstructed labor.

Northern Mali’s Nursing Students Are Learning Fast—Because They Must »

The Situation in Northern Mali »