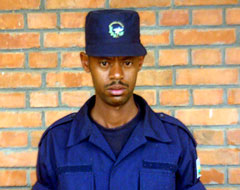 Épaphrodite Manigaraba is a young man, but already he’s established a reputation for himself as a patient, compassionate, and trustworthy police officer.

“For me, justice is the fight against inequality,” he says. “There are many departments in the police, but I wanted to work in the area of gender-based violence in order to protect survivors and [help them] find solutions to their problems.”

But knowing how to talk to survivors is not always easy, especially when it comes to providing psychosocial support. Learning how to talk to someone who has lived through trauma was one of the important lessons Épaphrodite learned as a participant in a gender-based violence training workshop that IntraHealth’s Rwanda office recently organized.

“The training helped me learn different strategies to use when talking with survivors and made me realize that I need to spend more time with them,” Épaphrodite says, though he adds that making sure survivors of physical and sexual violence are taken to a health center is always the first priority of officers at the station.

“Sometimes we have to use our own airtime to call an ambulance, but we always do because we know how important it is for survivors to see a health provider,” Épaphrodite says. Immediate medical attention ensures that survivors of sexual violence, for example, get post-exposure prophylaxis to protect them against HIV infection as well as other urgent medical care.

Part of the training, which Épaphrodite attended with over 20 of his colleagues, focused on the importance of linking survivors with police officers and health providers. The link is important because survivors not only need clinical care in the critical hours after an attack but also legal protection and justice—justice that may hinge on evidence gathered by health providers during a physical examination.

“When survivors go to the health center first, providers call the police to let us know so we can follow up,” Épaphrodite says. “Some women in Rwanda do not know they have rights, so it’s important for us to make sure they understand that they can press charges. It’s also important for us to educate men because they are sometimes ignorant about the rights of women and the laws protecting them.”

For this reason, one of Épaphrodite’s primary responsibilities as a police officer is to talk to community members about their legal rights. “The law protects everyone, including women and children,” Épaphrodite says. “Gender-based violence persists in Rwanda because of a lack of knowledge, [and because of] poverty and culture, but especially a lack of knowledge. Educating the population is an important step in overcoming gender-based violence in our country.”

According to various studies, more than 25% of Rwandan women have been victims of sexual violence1, 31% have suffered physical violence, and 35% have suffered some form of intimate partner violence2. A 2005 study by the World Health Organization reported that in ten countries* between 15-71% of women experienced physical or sexual violence from a husband or partner.3 In serious and egregious cases, the full strength of the law is the only effective recourse for the protection of the survivor and one which Épaphrodite and other trained officers turn to without hesitancy.

The HIV/AIDS Clinical Services Program in Rwanda is funded by USAID and led by IntraHealth International in the districts of Gasabo, Gicumbi, Nyagatare, and Rulindo.