In Costa Rica, Strengthening Health Systems Has a Human Side 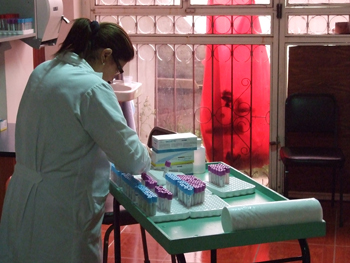 It is indeed all of those things, as I learned during a visit to a program working to improve care for people living with HIV led by IntraHealth International , a non-profit organization that empowers health workers to serve better communities in need, but it also has a more human side.

Over two days, I spoke with a dozen health workers and managers about IntraHealth’s Central America Capacity Project. Several of them referred to these technical improvements as the calidad (or quality) side of health system strengthening, but they seemed to place equal emphasis on calidez (warmth). Many of the calidez changes can be made without incurring much, if any, financial cost. Virtually all of the health workers I talked to gave me examples of calidad and calidez:

IntraHealth’s Costa Rica Country Representative Emmanuel Gómez told me that if an HIV-positive person seeks help at a clinic where health workers have not been trained in providing good care for people living with HIV, one of two things happen:

In Costa Rica, IntraHealth works with 10 hospitals to assess and improve their health workers’ skills in working with people with HIV. Costa Rica is one of five countries in Central America where IntraHealth is working to improve care and treatment services for people living with HIV in public sector hospitals and in three networks of non-governmental organizations (NGOs).

For me, the most exciting thing was to see the hospitals taking tools that were developed specifically for people living with HIV, and also using them to strengthen the broader health system. This is something I have often heard the President’s Emergency Plan for AIDS Relief say it does, but it was my first time to see it actually happening on the ground. For example, guidelines for improving blood bank operations at Hospital de los Niños will have obvious benefits for people uninfected by HIV.

The hospitals are now facing challenges not easily addressed by Capacity. For example, many of the hospital buildings are in need of repairs and updates, but the project does not provide money for infrastructure improvements. The government will have to find creative means to fix these problems in a system where most of the hospitals are at least 50 years old.

As part of the project, hospital staff monitors and evaluates workplace performance constantly so that it can be tracked over time and appropriate changes made immediately.

The ten hospitals have all had their performance measured either twice or thrice, depending on when they joined the project. All ten of them improved their performance in their second measurements, in increases ranging from 1% to 19% over baseline measures. However, of the four hospitals that have been measured three times, only one improved its performance. One stayed the same and two went down slightly, suggesting that the low-hanging fruit has been plucked and the next generation of challenges faced by Capacity and the hospitals will be more daunting. But the health workers I met seemed to be up to the task.

The Central America Capacity Project is funded by the U.S. Agency for International Development and works with ministries of health, universities, public and private institutions, and community organizations. The project began in 2009 and is scheduled to run through March 2016.