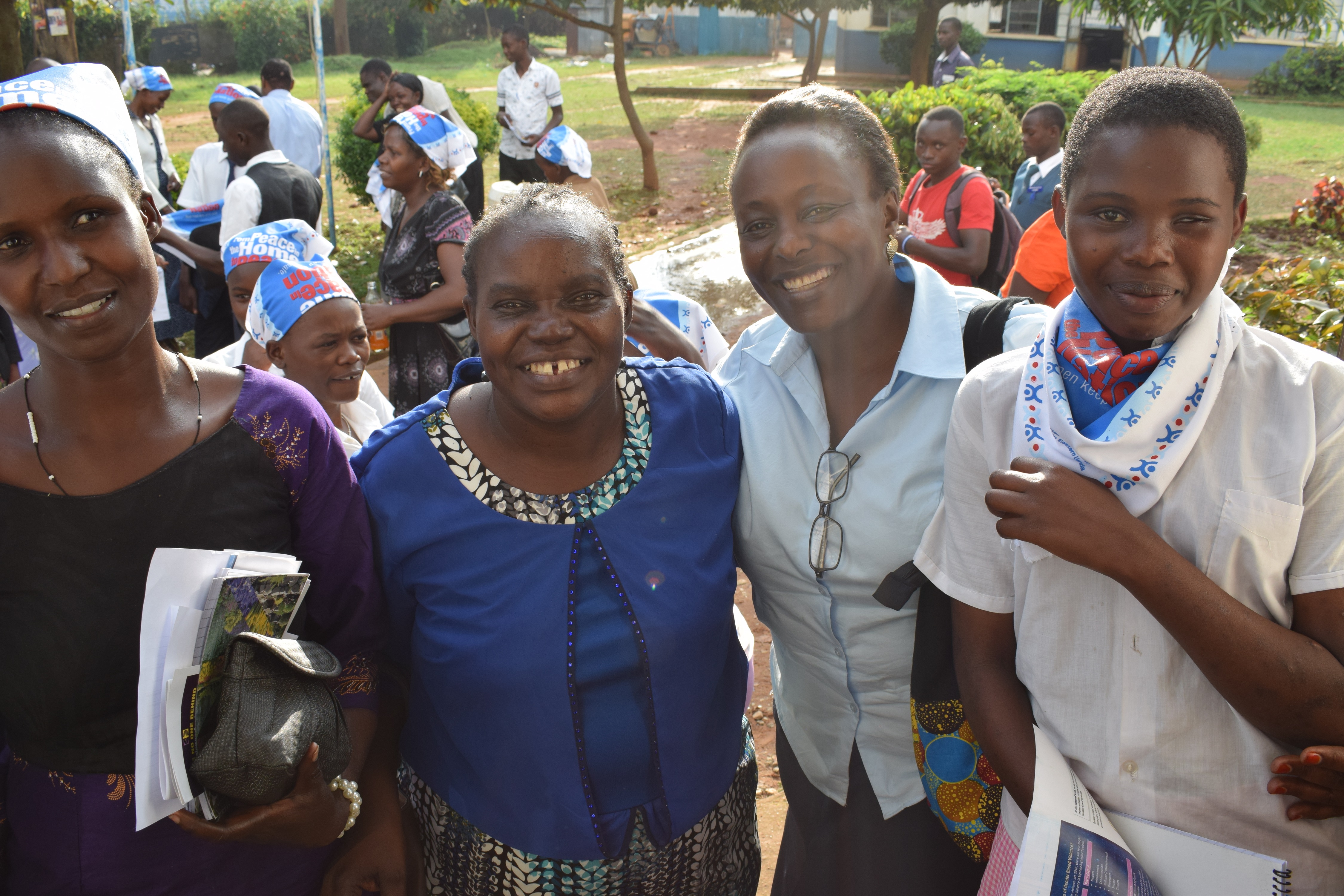 Sylvia (2nd from right) with fellow teachers and a student after a dialogue session in Mbale. Photo used with permission by Irene Mirembe for IntraHealth International.

Sylvia is helping young people protect themselves from violence, access health services, and stay in school.

Wokuri Sylvia is a 45-year-old survivor of gender-based violence (GBV) and today is a primary school teacher in Mbale, Uganda, on a mission to keep girls and boys safe from violence.

As a teenager in rural Mbale, Sylvia experienced her parents’ horrible divorce. With no secure social support, she lost her teen years to turmoil.

“When my parents divorced, it was horrible,” says Sylvia. “Our family broke up. My siblings stayed with different relatives. It was brutal as a teenager trying to find a place in my community.”

Sylvia became pregnant and dropped out of school. She moved in with her boyfriend and gave birth to a baby girl. She soon became pregnant again, and then again. As a mother of three with little money to support her family she decided to go back to school.

“My boyfriend was supportive at first,” Sylvia says. “I finished school, got my teacher diploma, and began working again. Life was good.”

After a while, her boyfriend began to question her long working hours, and that’s when the violence started. It was bad, but Sylvia stayed for the children. The beatings and angry outbursts never ceased. In fact, they increased as the months passed.

Not a day goes by when there isn’t some mention of violence against women in the media in Uganda.  According to the Demographic Health Survey in 2011, 56% of Ugandan women experience physical violence. And, according to last year’s survey, 22% experience sexual violence.

GBV—including emotional, physical, and sexual violations—reaches every corner of the world. The numbers of women and girls affected by this problem are staggering. According to World Health Organization data, one in every three women has been beaten, coerced into sex, or abused in some other way, most often by someone she knows. And one in five women is sexually abused as a child.

Gender-based violence is not only a violation of individual women’s and girls’ rights. The impunity enjoyed by perpetrators, and the fear generated by their actions, has an effect on all women and girls. It also takes a toll on a global level, stunting the contributions women and girls can make to international development, peace, and progress.

Women and girls like Sylvia are at the core of our project’s business. The USAID Regional Health Integration to Enhance Services in Eastern Uganda (or RHITES-E) Activity is mainstreaming gender interventions and helping districts in Eastern Uganda deliver high-quality GBV screening and referral services both in health facilities and in communities. Through community outreach and work with village health teams and youth champions, RHITES-E reaches in-school youth and links them to health facilities for care and support. Women like Sylvia are crucial to connecting young people to these services.

Sylvia is one of the few survivors of gender-based violence who is comfortable publically sharing her experience, although it took some time for her to overcome the self-stigma and pain.

When she was in the abusive relationship, Sylvia was fearful for her young children who were blossoming into teenagers and witnessing the violence between their parents. She wanted to show them healthy relationships and provide them with good models for their own future relationships. She felt she had to do something, but the thought of the negative reactions from her family and community if they knew about her troubled relationship forced her to stay. She continued to hold on, thinking the boyfriend would change.

This didn’t happen. The violence got worse.

Know your worth. Stay in school. Secure your future.

“One time during the outburst episodes with my boyfriend, he pulled a gun at me,” Sylvia says. “This was my breaking point, and I had to stay and fight or leave with my children. I chose to leave for the sake of my sanity and for my children’s safety.”

Adjusting to life as a single mother was not easy, but she kept pushing. Today her three daughters—now in their mid-20s—are thrilled Sylvia is a self-assured woman.

Sylvia went back to school and received a post-graduate diploma and is now a primary school teacher at Namakwekwe Primary school in Mbale Municipality. She quickly learned that self-confidence is one key to women’s empowerment. When a woman truly realizes her worth and can publicly act on that confidence, she says, the world changes for her. Today she uses this knowledge to advocate for a safe education for the girls and boys she teaches.

Sylvia embraces opportunities to work as a youth GBV champion with USAID RHITES-E and to take action to end violence against women and girls. She uses her voice and experience to inform and raise awareness about GBV among her pupils.

“My joy is seeing school pupils confident and staying in school to study. When a girl or boy finishes school, nothing can shake the foundation that one builds for a solid future. I encourage my students to speak up and fight to stay in school,” Sylvia says. “Know your worth. Stay in school. Secure your future.”